During the violent riot at the U.S. Capitol last Wednesday, a mob of Trump supporters breached security and entered the building as members of Congress were gathered inside. One officer was seen risking his life to divert an angry mob away from the Senate chamber, leading the group in the opposite direction at a crucial moment when the lawmakers were not yet safely locked down.

Video taken by HuffPost politics reporter Igor Bobic shows a Black Capitol Police officer standing the hallway a few steps ahead of the mob, trying to hold them back, and then heading up a staircase as the men chase after him. “Here’s the scary moment when protesters initially got into the building from the first floor and made their way outside Senate chamber,” Bobic tweeted when he shared the video in the midst of the chaos Wednesday afternoon.

Here’s the scary moment when protesters initially got into the building from the first floor and made their way outside Senate chamber. pic.twitter.com/CfVIBsgywK

The mob continues to follow the officer, who is alone, and shout at him as he makes his way to another area of the Capitol, where more law enforcement awaits.

The harrowing video went viral, with nearly 10 million views on Bobic’s post as of Monday. The Capitol Police officer has been identified as Eugene Goodman, who is being hailed as a hero for diverting the intimidating mob away from the Senate chamber.

This moment in ⁦@igorbobic⁩ stunning footage. In front of the officer, coming up the stairs, is a mass of rioters. The USCP officer glances to his left. Between those two chairs is the entrance to the senate floor. He lured them to his right, away from their targets. pic.twitter.com/knjQQ4GZ0d

Goodman is an Army veteran who spent time in Iraq, CBS Washington, D.C. affiliate WUSA reports. While the Capitol Police leadership has been criticized for the security failures, and its chief has resigned, many are praising Goodman for his brave and quick-thinking reaction at a crucial moment in the crisis.

The leader of the mob who chased him, the man seen in the video wearing a QAnon t-shirt, has been identified as Doug Jensen of Iowa. Des Moines police assisted the FBI in arresting Jensen Friday night and he was booked into the Polk County Jail. 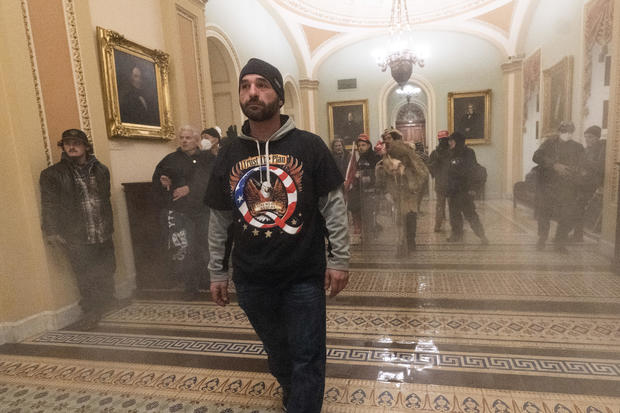 The sheriff’s office said the charges against Jensen provided by the FBI include: knowingly entering or remaining in any restricted building or grounds without lawful authority; disrupting the orderly conduct of government business; violent entry and disorderly conduct in a Capitol building; parading, demonstrating, or picketing in a Capitol building; and obstructing a law enforcement officer during a civil disorder.

Jensen, 41, was also let go from his job as a laborer at a masonry company, the firm’s CEO CBS Des Moines affiliate KCCI.