Bluesfest has roared back to life after a disastrous two years that saw the Byron Bay event cancelled three times due to the pandemic.

And a defiant Peter Noble, veteran director of the event, has declared he will take Bluesfest to the “next level” in coming years as international names start returning to Australia. 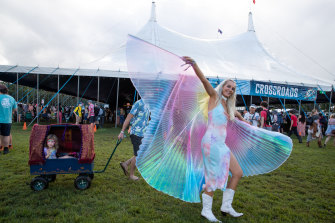 The Bluesfest crowd have been in celebratory mood all weekend.Credit:Edwina Pickles

But even with the pandemic crisis subsiding, putting on the 33rd annual festival with headliners including Midnight Oil, Paul Kelly and Crowded House, has been far from plain sailing.

On top of the region’s disastrous floods in February, the area was again hit with flash flooding two weeks ago, turning the festival site into a quagmire and forcing organisers to rescue bogged cars in and scramble to replace “glamping” tents.

“The challenges have been incredible,” says Noble. “We’re thinking, ‘What’s coming next?’ But our attitude is whatever it is, we’re gonna do it. I’m not bullshitting. That’s how it has to be – you deal with the challenges.”

Noble remains angry about the cancellation of last year’s event with just one day’s notice due to a single COVID-19 case detected in the region. 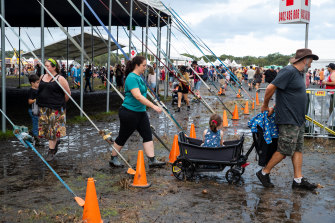 The variable weather failed to dampen spirits among the audience.Credit:Edwina Pickles

“We were just in shock,” he says. “You mean the Royal Easter Show is still on? That there’s no COVID in Sydney? We had one case of COVID in Lennox Head, and it wasn’t even a ticket buyer. Are we that insignificant that they just shut us down at that risk level?

“The message our industry got was, ‘You don’t matter.’”

Ultimately, however, there was cash aid for Bluesfest from the government. Noble says without that assistance Bluesfest may have ceased to exist.

Noble is already well into planning next year’s event, teasing that he has a number of international stars in his sights. 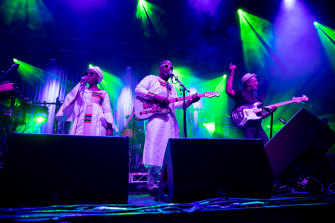 “If I was strictly a blues festival, we’d have maybe 4000 people on site with Jack Daniels T shirts being stretched. I want to put on a popular music festival, that is not primarily playing what you’ll see on the charts, or Triple J programming.”

After a career in the industry spanning nearly 50 years, which he began as a bass player, Noble still retains his enthusiasm for music. 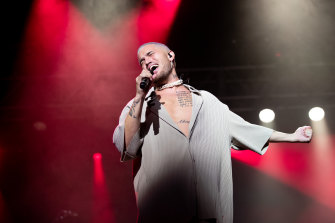 Stan Walker provided a blistering set on the Friday.Credit:Edwina Pickles

“I love the fact that I can be now into what some may think is the latter part of my career and still be discovering new music,” he says.

“It’s not Live Nation and it’s not all about teenagers. I’m just this little indie guy down in Australia that just cares about … I used to call it real music … but a lot of people don’t like that. So let’s just say the greats or the next generation of the greats. Yeah, that’s what I want to do.”