Prime Minister Scott Morrison is prepared to pay pharmacists and doctors more to administer boosters to meet demand, but state hubs will still be vital as the country’s top health expert flags he is open to bringing forward the booster schedule.

National cabinet meets on Wednesday to discuss the response to the omicron variant and look at what public health measures, including indoor mask-wearing, will be needed to combat its spread. 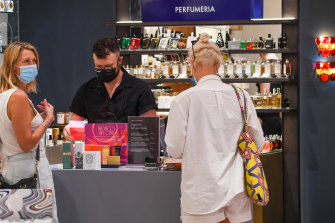 Chief Medical Officer Professor Paul Kelly said it was vital to get “as many third booster doses into arms in the coming months as possible”, but public health and social measures would also have an important role in slowing the spread of omicron.

“For now, there are some easy steps we can take as individuals to help our community, including practising good hand hygiene and wearing a mask when indoors,” he said.

So far, NSW Premier Dominic Perrottet has resisted calls to reinstate mask-wearing indoors, but other states including Tasmania and the ACT have brought back mask mandates. Mr Morrison said it was a decision for each state and territory to make.

“I’ve spoken to the NSW Premier quite regularly because that’s where we’ve seen, obviously, the biggest surge in cases. And, look, practical decisions will be taken there,” he said on Nine’s Today show earlier on Wednesday.

The country’s leaders will also discuss the travel testing requirements in states including Queensland, which Mr Morrison said has placed “tremendous pressure” on pathology labs in NSW and Victoria as those states record thousands of cases of coronavirus.

“One of the big reasons we’ve got those queues in Victoria and NSW is you’ve got people who are required to get PCR tests before they travel into other states. Now, that needs to be looked at,” the Prime Minister said.

“Rapid antigen testing in those situations would certainly be a more effective option.”

The federal government is focused on ramping up the booster program, Mr Morrison said, as 48 per cent of those eligible have had a third shot so far after the booster schedule was reduced to five months on expert advice earlier this month.

Doctors and pharmacists have said the reduced funding for third doses is preventing many practitioners from hiring enough staff to run vaccine clinics and business as usual.

The Victorian and NSW health ministers also raised concerns with the federal government that primary care did not have the capacity over the holiday period to administer boosters.

Mr Morrsion said “of course” it was a possibility funding for GPs and pharmacists would increase.

“We’re working through that with them, literally, right now. That’s been an issue we’ve been working with them on over the last week or so,” he said.

“The government will continue to follow the medical advice and bring forward that interval if necessary,” Professor Kelly said.

On Tuesday, the Australian Medical Association president Omar Korshid said there were not enough workers to deliver boosters, regardless of the interval between second and third doses.

“I know everyone’s desperately keen to get their booster, but changing eligibility doesn’t magically mean the rollout is going to go faster,” Dr Korshid said.

The Prime Minister said any decision to shorten the interval further was up to the medical experts, but increasing the capacity of state vaccination hubs would be key to getting doses out.

“What’s important is we get those state-based hubs back in operation and we’ll be able to keep moving forward on that today,” Mr Morrison said.