Bret Easton Ellis hasn't had a book out since Imperial Bedrooms, one of his lesser novels, and for those who've been wondering where he's been for the past nine years White, part memoir part essays, provides a partial answer.

Ellis complains about writing pilots that never get made, the financial and box-office disaster of the film adaptation of The Informers, the $US14 million ($20 million) lost getting American Psycho The Musical onto Broadway, as well as his unsuccessful twitter campaign to adapt the Fifty Shades trilogy. 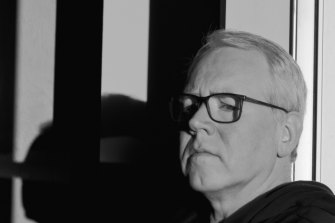 In between his eclectic, funny/irritating commentary on American pop culture, snippets about his relationships and friends and previously unrevealed sources of inspiration for his novels, Ellis vents his anger with the current political and artistic climate in the US and he does it in style.

Ellis has been moving towards non-fiction since Lunar Park, which successfully fused memoir with horror, so in this sense White is a logical next step. However, Ellis is famous for blurring the boundaries between fact and fiction so caution may be needed here, especially with the apparent autobiographical parts of the book.

Ellis has had lots of practice engaging the reader through a kind of literary hide and seek, and White is true to form from its opening, which echoes the beginning of his first novel, Less Than Zero, where Ellis' younger alter-ego is "afraid to merge" on a freeway in LA. White's Ellis is "stuck in traffic", an image that works symbolically for the entire book. Sadly, and much to his frustration, Ellis the novelist still dreams in novels but lives in a world where the novel no longer matters. Instead, he finds himself writing notes for novels that never get completed.

Ellis segues into an account of his Generation X childhood, his homosexual fascination with male film stars, but my favourite part is the section that sandwiches his exploration of where Patrick Bateman the misogynist, racist Wall Street serial killer protagonist of American Psycho would be if he was alive today, between sections about Trump's election (remembering that Trump was Bateman's idol). I kept waiting for Ellis to literally spell this connection out, but he leaves it to the reader to join his unspeakable dots.

As with Ellis' bestselling novels, the unpalatable aspects of his opinions are rendered more digestible by his audacity, his polished technique and the sharp focus of his bleak vision. This latest Ellis delivers a warning to cultural elites the world over: the logical conclusion of today's political correctness turned social media totalitarianism will be the "spread of separatist alt. right and all-white organisations". That contemporary totalitarianism is controlled by the corporations is nothing new to Ellis' oeuvre but because his previous hypotheses have proven prophetic in the past perhaps the left will listen now? 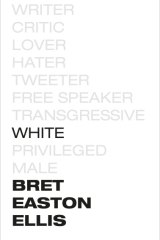 Another reason Ellis may be more qualified to speak on such subjects than your average novelist is because he lived on the front line of society's taboo forbidding the expression of extreme violent hatred because of its potential to incite violence throughout the reception of American Psycho, which included death threats from extreme feminists.

While White is best conceived as a rant with entertaining excursions into American pop culture – sections are reminiscent of Bateman's notorious record reviews – its object is heroic. Ellis wants to save the world, or at least the parts he cares about: aesthetics, creative freedom, the novelistic and filmic imaginations and the concept of the zeitgeist.

That this world is also, for Ellis, white, male and privileged is a kind of unattractive side effect and there is an element of poor little rich boy that undermines his complaint about contemporary "victim" culture.

By failing to adequately negotiate its own blind spot, White falls sadly short of its ambitions. Had Ellis genuinely become vulnerable by admitting that the past nine years have been tough professionally and that this tricky terrain coincided with the most public declaration of his homosexuality to date, he would have added the depth and emotional complexity he claims to seek. But Ellis chooses to remain consistent to brand, adhering to an incredibly disciplined almost narcissistic aesthetic of nihilistic, glitteringly camp, surface.

After completing a PhD on American Psycho, I felt I'd said everything I had to say about Ellis' work, but this latest book has proven me happily wrong. Ellis is no Alexander Chee and many fans would have it no other way.

However, while White provokes its readers with cattle-prod strength, when I ask myself what recent texts have inspired me politically I think of Woman at War, a brilliant Icelandic-Ukrainian film about an environmental vigilante. I suspect getting around today's ubiquitous corporations may require more than just words or tweets, no matter how electrifying, given the extent of the failure of the democratic process. Civil disobedience anyone? Election, bah humbug!