Prosecutors have secured their first two guilty pleas for assaults on officers during the January 6 Capitol attack. Scott Fairlamb, who was filmed punching an officer in the head, and Devlyn Thompson, who admitted to using a baton to assault a Metropolitan Police sergeant, both entered guilty pleas Friday.

Fairlamb, 44, pleaded guilty to two crimes — obstruction of an official proceeding and aiding and abetting, and assaulting, resisting, or impeding certain officers. In exchange for his plea, he faces a recommended sentence of 41 to 51 months in prison, or around three to four years. He also agreed to cooperate with the FBI through an interview and pay $2,000 in restitution.

Shortly after Fairlamb entered his guilty plea Friday, Thompson pleaded guilty to assaulting, resisting, or impeding certain officers using a dangerous weapon — in his case, a baton. According to the Department of Justice, the 28-year-old used the metal baton in an apparent attempt to knock a can of pepper spray from an officer’s hand. He was also part of a group that “threw objects and projectiles at the officers, including flag poles” and stole riot shields to prevent police from being able to defend themselves, the DOJ said.

Prosecutors did not specify a recommended sentence for Thompson during Friday’s hearing, but said his defense attorney indicated the sentencing guidelines level was 23. That level typically corresponds to 46 to 57 months, although ultimately the decision rests with the judge who will determine any sentence after considering the guidelines and other statutory factors.

CBS News has found that 150 officers were injured during the violent attack on the U.S. Capitol, and prosecutors have so far charged at least 170 defendants with felony assault on a police officer. The FBI has said they’re still looking for hundreds of suspects accused of assaulting police.

Thompson’s lawyer said Friday his client has been cooperating with the government, noting that he met with the U.S. Attorney’s office and the FBI during multiple proffer sessions and has given the government access to his social media accounts. Thompson’s lawyers also said he planned to provide the U.S. Attorney’s Office with an apology letter to the sergeant he assaulted.

Thompson had been released on bail while he was cooperating with the government, but after he entered his guilty plea Friday, a federal judge ordered him detained as he awaits sentencing in September.

Fairlamb — who, according to court documents, is a gym owner, bar bouncer and security guard — was ordered detained after his January arrest, after prosecutors cited the gravity of his alleged offense and his lengthy criminal history, which includes at least two prior assault convictions.

Fairlamb had previously been indicted on 12 counts — which included civil disorder, obstruction of an official proceeding and engaging in physical violence in a restricted area. 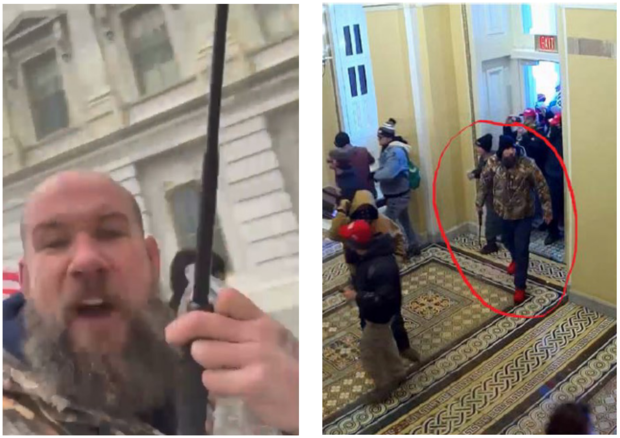 Authorities built their case against Fairlamb with the help of at least four tipsters, who shared videos, some taken by Fairlamb himself, that painted a picture of his conduct throughout the day January 6 as he climbed scaffolding, shouted at officers and entered the Capitol building.

A media coalition, including CBS News, later received access to police body-worn video from the incident that was played in court as evidence. In the footage, Fairlamb can be seen approaching the officers and screaming: “Are you an American? Act like a f***ing one! … You guys have no idea what the f*** you’re doing. Not one single f***ing idea.”

Prosecutors said one officer, attempting to catch up with his colleagues, placed his hand on Fairlamb to move him out of the way. Fairlamb could be heard on video saying, “Don’t touch me, bro,” before shoving the officer so hard that he fell into others in the crowd, prosecutors said.

The officer can then be seen putting his arm up defensively as Fairlamb punches him on the front of his helmet.

In a filing arguing against his release, prosecutors wrote that “His actions show a capacity and wanton willingness to violate the law, to engage in acts of disorder and violence, and to harm others, including uniformed law enforcement.”

According to prosecutors’ court filings, Fairlamb could be seen earlier in the day climbing scaffolding outside the building and screaming, “We ain’t f****n’ leaving either.”

Later, he was filmed picking up a collapsible baton near the skirmish line with police on the Capitol West Terrace. In one video posted to his own Facebook account, prosecutors said Fairlamb could be seen carrying the baton and saying, “What Patriots do? We f****n’ disarm them and then we storm f****n’ the Capitol.”

Shortly after, prosecutors said, Fairlamb entered the Capitol building with a baton in hand and left the building coughing after chemical agents were set off inside.

On January 6, prosecutors say Fairlamb posted to Facebook: “How far are you willing to go to defend our Constitution? Made the trip solo, looking to meet my fellow Patriots who share the same beliefs. Put up or shut up.”

When arguing against his pretrial release in March, prosecutors said Fairlamb had “violent impulses” and had competed as a mixed martial arts fighter. They also argued he had demonstrated a disregard for the law, noting that he opened his gym in May 2020 in defiance of the New Jersey governor’s stay-at-home orders.

His social media accounts also show that he subscribed to the QAnon conspiracy theory, prosecutors said, and a tipster shared a post from Fairlamb’s Instagram account that included threats against Congresswoman Cori Bush.

In his post, prosecutors said Fairlamb wrote, “@coribush You’re full of s***, shoulda lit your ass up,” and includes images of other violent posts, including, “I wish someone would put a knee on your neck for spreading lies,” and “When they defund they [sic] police you shoot back.”

In a recent interview with CBSN, Bush explained her position on “defunding the police” while also defending her spending on private security, saying that she frequently receives death threats.

Fairlamb’s defense counsel said that his brother is a federal law enforcement agent with the United States Secret Service. Fairlamb’s lawyer said in April that Fairlamb had not been in contact with his brother, in an effort to ensure the integrity of all parties and “ameliorate any pressure of uneasiness his arrest has caused his brother.”