PLATELL’S PEOPLE: Chrissy Teigen’s decision to bare all on social media after suffering a miscarriage really is courageous

Many have questioned the wisdom of model Chrissy Teigen posting pictures to 13 million Instagram followers just moments after she had lost her third child halfway through her pregnancy.

In one, she and her pop star husband John Legend heartbreakingly cradle the little boy they had already named Jack in the hospital bed after he died.

In another, the bereft mother leans forward in grief, tears trailing down her cheeks. Too much? Too private to share with the world?

Quite the reverse, in my view. Yes they are celebs, yes they use social media to publicise themselves. But by revealing their terrible sadness at losing a child, they give succour to other people who have suffered in the same way, such as Kate Beckinsale, who has now revealed her own ‘soul-destroying’ miscarriage. 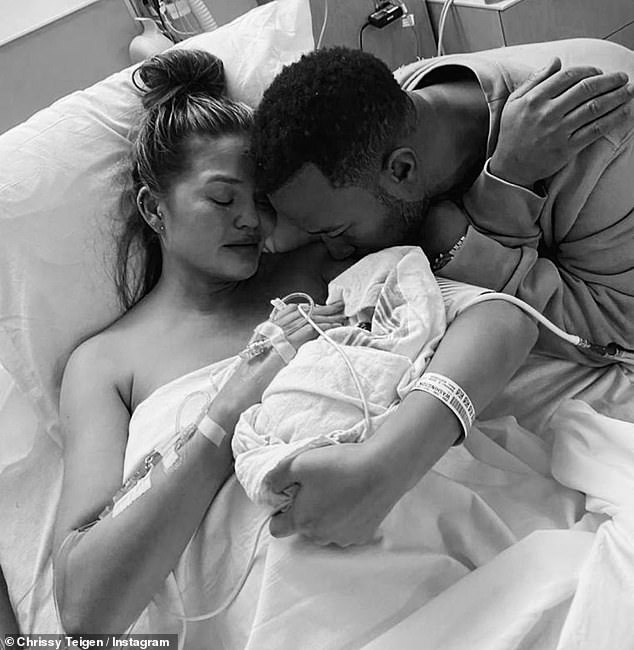 In those black-and-white pictures, Chrissy embodies the broken dreams of millions of mothers and fathers who have lost babies — for the tragic truth is that one in every four pregnancies ends in miscarriage. She later tweeted: ‘Driving home from the hospital with no baby. How can this be real?’

The searing guilt she felt was expressed in her apology to her son for not being able to ‘give you the home you needed to survive’.

She spoke of ‘the kind of deep pain you only hear about, the kind of pain you’ve never felt before’.

Millions have endured this agony — yet for so long miscarriage has been taboo, something we’ve shied away from speaking about. There are no missed birthdays to dwell over with a miscarriage, no family moments to recall, no happy baby selfies. 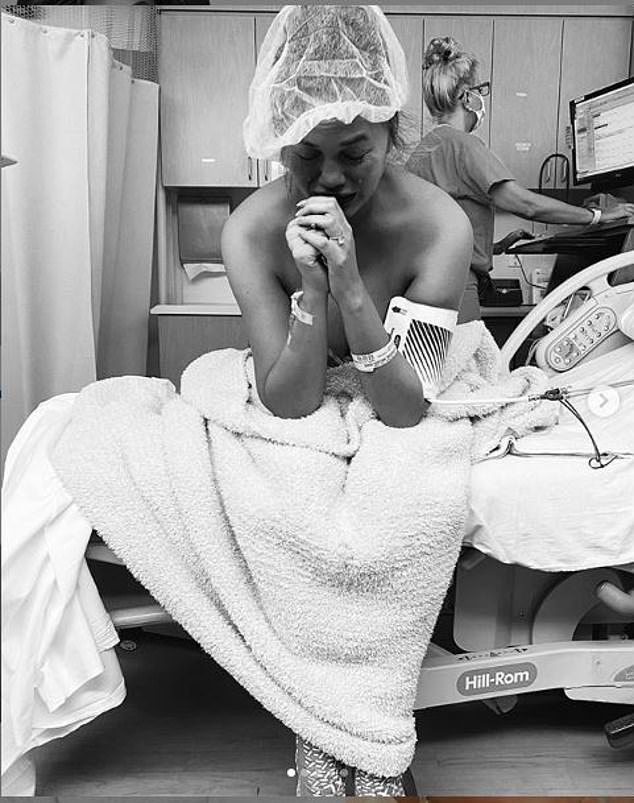 In those black-and-white pictures, Chrissy embodies the broken dreams of millions of mothers and fathers who have lost babies

My mother, who lost a son at six months, only told me of the emptiness she felt decades after she’d miscarried. She felt guilty lamenting the loss of an unborn child when, like Chrissy, who has two children, she was already ‘blessed’ with healthy babies.

I also understand some of that sadness from my 20s when, newly engaged and told I was ‘probably’ pregnant, it turned out to be ectopic. For me, ecstasy turned to tragedy, and I never again conceived.

Social media is rightly pilloried for being a fast track to hatred, intolerance, voyeurism and cruelty.

And yet, with the image of those tears, Chrissy spoke to so many women who have suffered. It was a brave and heartfelt gesture, and we should applaud her for breaking through this damaging wall of silence 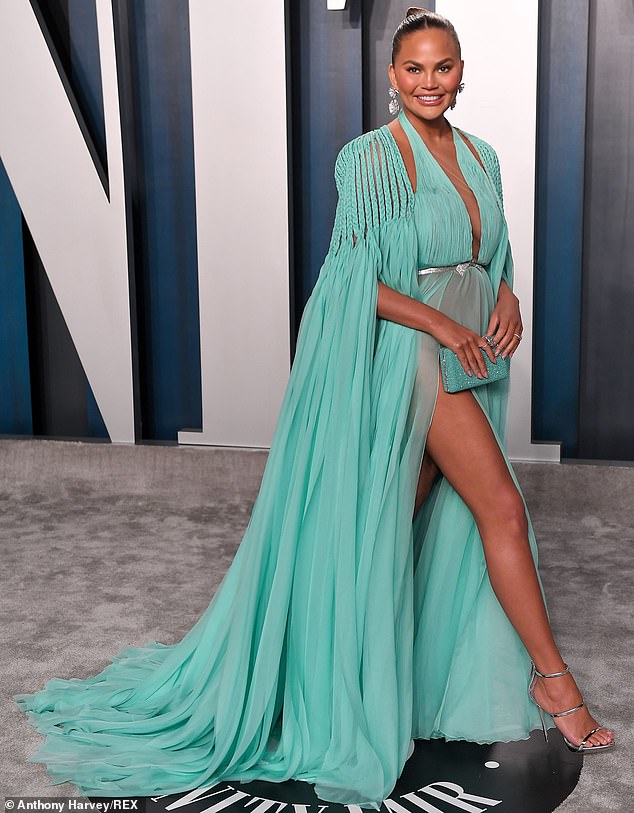 And yet, with the image of those tears, Chrissy spoke to so many women who have suffered

Halloween’s trick-or-treat is cancelled due to Covid-19, hurrah! Curmudgeonly? Yes, but then I can’t forgive the kids who pelted me with raw eggs when I’d just arrived in the UK, unaware of this ridiculous American pagan tradition, and had no treats for them.

Can I be the only one in awe of the naked Instagram pictures of mum-of-two Gwyneth Paltrow celebrating her 48th birthday? No knickers, hardly a scrape of make-up, straggly hair as if she’s just got out of bed after six hours of tantric sex, she looks fabulous — and it’s all down to her own brand Goop ‘insanely amazing new £43 body butter’. Forget loo rolls during any new lockdown — and expect spreadable butter sales to soar. 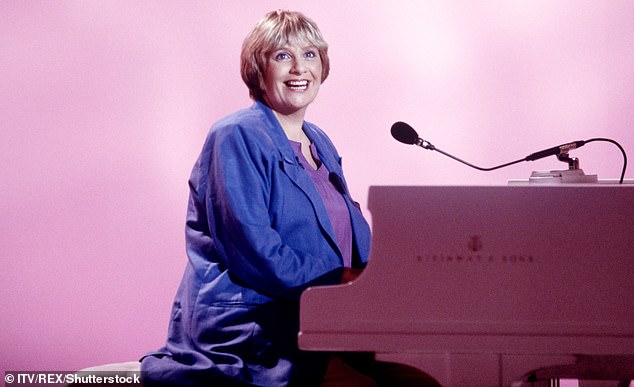 In her posthumously published biography, Victoria Wood wrote her own epitaph: ‘Was born, lived, told a few jokes, knackered a few bras in the tumble drier, died

In her posthumously published biography, Victoria Wood wrote her own epitaph: ‘Was born, lived, told a few jokes, knackered a few bras in the tumble drier, died.’

Told a few jokes? She was the first women to tell good jokes about women.

Like this one: ‘They’re terrible things, bras. I read in a magazine a test to see if you needed to wear one . . . if you could hold a pencil underneath [your breast]. It was very depressing for me. I could hold a small branch of WH Smith under one of mine.’

Uplifting to the end.

That was so dumb, Dom

How revolting of The Wire star Dominic West to announce he ‘did slightly leap in the air with joy’ when he heard Donald Trump had been diagnosed with coronavirus.

Whatever you think of The Donald — and I can’t abide him — no one should wish this horrible disease on even their worst enemy. West’s virtue-signalling comment was straight out of the mouths of those morons on the hard-Left who chanted ‘Ding Dong, the Witch is Dead’ when Maggie Thatcher died.

Desperate to appeal to the ‘yoof’ market of 16 to 34-year-olds, the Beeb rejected the new All Creatures Great And Small series and gifted it to Channel 5, where it has been a huge hit.

No doubt Auntie sweated over the lack of diversity in James Herriot’s sweet story of 1930s rural Yorkshire vets. Beautiful landscapes, decent people, lots of dying creatures saved — surely even that last one must appeal to woke teenagers today. 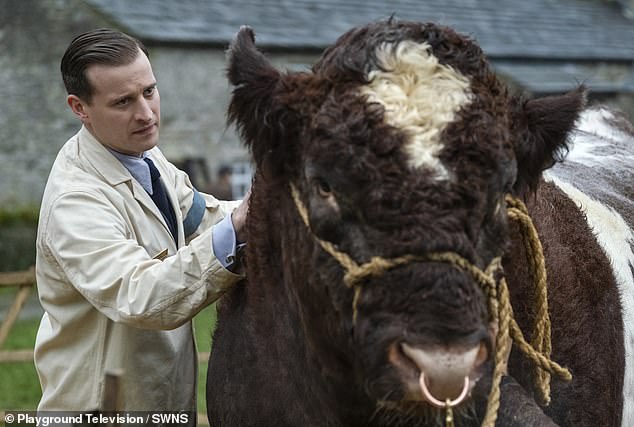 The Beeb rejected the new All Creatures Great And Small series and gifted it to Channel 5, where it has been a huge hit

I shed a tear listening to Jenni Murray’s final Woman’s Hour, not just at the thought of losing her wit, her feminine wile and her warmth, but because it represented the end of an era in which presenters understood us women. How apt Jenni left to the words of the recently departed Helen Reddy’s 1970s anthem I Am Woman, with its lyrics ‘hear me roar’. Fearless Jenni could certainly roar — as well as purr.

Our peerless, fearless footy pundit Gary Lineker has taken a voluntary pay cut of £400,000 from his million-pound-plus BBC salary. A noble gesture, Gary, but I hope that doesn’t mean you’ll give up on your promise to house a newly arrived migrant. Along with your million Instagram followers, I can’t wait for pictures of you and your new lodger.

She sheds it well

Having gained a stone during lockdown, a mortified Penny Lancaster, the former model now happily married to Rod Stewart, took a picture of her roly-poly tummy as an incentive to lose weight.

‘I turned to food and drink as comfort. As a wake-up call, I shamed myself and lost 17lb and 4in off my waist in eight weeks,’ she says.

As a regular on ITV’s Loose Women, I’m not sure Penny is in touch with her core audience, who abhor fat-shaming, even if you do it to yourself. Although for every lardy lady castigating her, millions of others will be asking: ‘How did you do it!’

In his interview berating ‘structural racism’ in the UK, Prince Harry said: ‘You know, when you go into a shop with your children and you only see white dolls, do you ever think: “That’s weird, there is not a black doll there”?’

What a ninny; Barbie launched their first black doll in 1968. Harry’s like Jethro from The Beverly Hillbillies. Kind but dim-witted, and a font of laughter, always at his own expense. As for his claim London doesn’t ‘feel’ diverse; two out of five Londoners are not white. Perhaps you don’t notice from the back of a chauffeur-driven limo.