Australia's union movement has offered to collaborate with the Morrison government to encourage workers to get vaccinated even as the two sides brawl over industrial relations reform.

The Australian Council of Trade Unions wrote to the government on Tuesday urging it to bring employers and workers organisations together for formal talks on the vaccine rollout, a move reminiscent of the early days of the pandemic when industrial opponents compromised to keep workers employed. 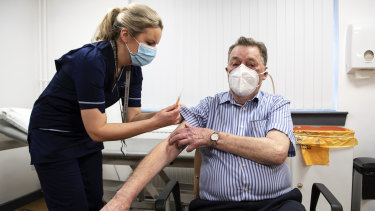 The ACTU says Australia can’t be distracted by a divisive public debate about whether or not vaccination should be compulsory.Credit:Getty

Without talks the unions warn there is more likelihood of conflict about whether workers in industries such as aged care should be forced to be vaccinated and a risk the public will be less trusting of the vaccine.

"Australia cannot be distracted by a divisive public debate about whether or not vaccination should be compulsory," ACTU acting secretary Liam O'Brien wrote in the letter obtained by The Sydney Morning Herald and The Age. "Such a debate would be a waste of national energy and likely impact public trust and confidence in the response."

A more transmissible strain of the coronavirus from the United Kingdom has upped the stakes of Australia's vaccine rollout, which Prime Minister Scott Morrison said could cover 4 million people by March.

Mr Morrison on Thursday stood by his previous remarks that any vaccine would be voluntary in Australia.

"[The vaccine] is voluntary, but that is an important discussion for public health and safety that needs to be had with states and territories," Mr Morrison said. 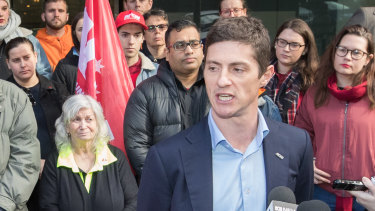 ACTU acting secretary Liam O’Brien, speaking in 2019 at the Fair Work Commission, wants businesses and unions to have a voice on the vaccine rollout.Credit:Jason South

Some industries could require a mandatory vaccine, Mr O'Brien said, but voluntary jabs backed by a mass public education campaign were the ACTU's goal.

"We must avoid a haphazard approach … as it will likely undermine our efforts to build high levels of public trust and confidence and manage what will, in the early days, be a scarce supply of the vaccine," Mr O'Brien said.

Acting Industrial Relations Minister Peter Dutton said the government would continue to take a cooperative approach to managing the vaccine, including consulting with unions and businesses in coming weeks.

Employer representatives including Kate Carnell, the small business ombudsman, and Innes Willox, chief executive of the 60,000-member industry association Ai Group, have called for more clarity from the government on the rollout.

Mr Willox said Ai Group had been talking to the government about vaccines for some time, including on the mandatory vaccine issue. "Ahead of [the vaccine's release], the government needs to issue advice to the community so that employers and employees know what their rights and obligations are," Mr Willox said.