A popular local contender for Liberal Party backing in the South Coast electorate of Gilmore has stood aside, all but paving the way for former NSW minister Andrew Constance to run at next year’s federal election.

Shoalhaven Heads lawyer Paul Ell pulled out of the preselection race on Thursday, after being elected to the Shoalhaven City Council. 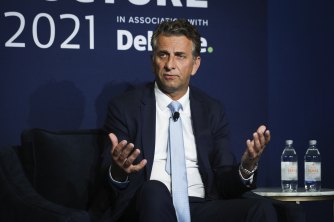 Former NSW minister Andrew Constance says he is “incredibly appreciative” of Paul Ell’s decision to pull out of the federal preselection race in Gilmore.Credit:Renee Nowtarger

“It is critical that we have a strong representative for the federal seat of Gilmore. This is why I want to maximise the Liberal Party’s chances of winning Gilmore at the next election,” Mr Ell said in a statement. “My judgement is that the best candidate to win Gilmore is my friend Andrew Constance. I hope to have the opportunity to work closely with him should he be selected.”

Mr Constance said he was “incredibly appreciative” of Mr Ell’s decision, describing the younger man as a rising star in politics.

“[His decision] is one based on unifying the team ready for next year,” the veteran state Liberal MP said.

He would not comment further on the federal preselection because of the party’s rules about active contests. 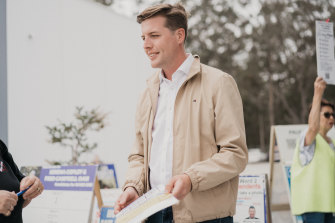 Lawyer Paul Ell has stood down from the federal preselection race after winning a Shoalhaven Council seat.Credit:Katherine Wilson

Labor’s Fiona Phillips won Gilmore in 2019 with 52.6 per cent of the vote after the sitting Liberal member, Ann Sudmalis, retired. This was a 3.3-point swing away from the Liberals.

The Liberal Party hopes to take the seat back in 2022. Mr Constance announced in October he would quit the NSW Parliament to take a tilt at the federal seat after being encouraged to do so by Prime Minister Scott Morrison.

But the move prompted unhappiness from local party members in the seat where Mr Ell has a strong support base. It also revived memories of the 2019 contest, when Mr Morrison backed Warren Mundine as the party’s candidate, overturning the selection of Grant Schultz by local members. Mr Schultz ultimately stood as an independent.

A senior party source, speaking on condition of anonymity, said research in the electorate suggested Mr Constance had the stronger backing from voters in the South Coast seat. They said Mr Ell’s decision did the right thing by the party.

There are still two others interested in running for the seat: Shoalhaven businesswoman Jemma Tribe and former Christopher Pyne staffer Stephen Hayes.

Mr Ell, who on Thursday was confirmed as winning a seat on the Shoalhaven Council, said the residents in the region needed all levels of government working closely together to achieve the best outcomes.

Mr Constance has represented the state seat of Bega since 2003. His electorate covers territory south of Gilmore but the two constituencies overlap around Batemans Bay and Moruya.

His decision to try to make the leap to the federal sphere was pushed in part by Gladys Berejiklian’s departure as NSW premier when the Independent Commission Against Corruption announced she was the subject of an inquiry.

At the time, he said he was sitting on the fence about his future but was “heartbroken” by Ms Berejiklian’s snap resignation.

He previously flirted with running for the federal seat of Eden-Monaro during the 2020 by-election, announcing he would step into that race then withdrawing amid an internal spat with then-deputy premier John Barilaro.