Vapes should be sold in shops from behind the counter under the same strict adults-only regulations as cigarettes, according to a submission from the country’s convenience stores, who argue it is the only way to counter a thriving black market in e-cigarettes.

The head of the Australian Association of Convenience Stores, Theo Foukkare, said poorly enforced restrictions on vapes had led to unregulated use among children, as well as millions of dollars in lost revenue for both retailers and the government. 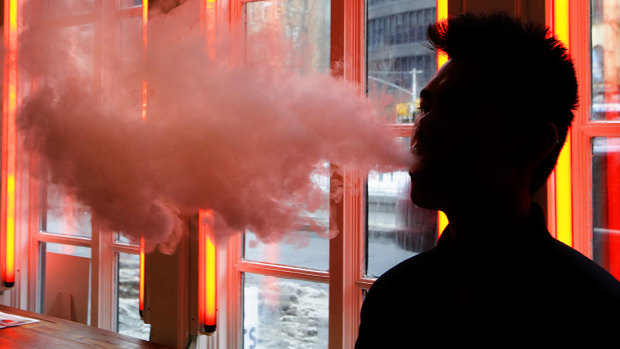 The poorly enforced restrictions on vaping products represents millions in lost revenue for the government and retailers.Credit:AP

The industry group’s submission to a review conducted by the Therapeutic Goods Administration (TGA) adds to a polarising debate over how best to deal with Australia’s runaway vaping market, after the federal government began consulting late last year on ways to deal with e-cigarette demand among school-aged children.

Health groups including the Cancer Council and Minderoo Foundation have been calling for an all-out ban on non-prescription vapes and stronger action to stop illegal imports at the border, warning of e-cigarettes’ adverse health outcomes.

Meanwhile, pro-vaping groups and some doctors promote vaping as a smoking cessation tool, and are warning against excessive regulation. Their proposals, as well as those from health experts and state governments, will be made public by the TGA after submissions close.

New laws the Coalition introduced in 2021 require people to obtain a doctor’s prescription to buy legal vape products. However, the restrictions have not stemmed consumer use or illicit supply: NSW Health data published this year showed 11 per cent of people aged 16 to 24 years old reported being current vape users – more than double the number than 2020 – while in Victoria, a five-year-old boy was hospitalised in February after vaping at school and consuming high doses of nicotine and other chemicals.

In the Australian Association of Convenience Stores’ submission to the TGA, Foukkare said vaping was now “completely mainstream in Australia” and the government would never be able to stop young people using the products under its current conditions.

“The right way forward is tight regulation with standards in place, and allowing adults to purchase regulated nicotine vapes through a licensed framework for responsible retailers,” he told this masthead.

The association represents 7000 stores, and counts Philip Morris, British American Tobacco and Imperial Brands among its members. It is also part of BAT’s responsible vaping movement.

Foukkare said there was an obvious financial benefit for his members, who have been reporting significant declines in tobacco sales, but that modelling his group commissioned from Roy Morgan showed the government was also missing out on $300 million in tax revenue, as sales continued under the counter.

“We have young kids buying unregulated products being imported by dodgy operators. Nobody knows what’s in them. If I look at how alcohol and tobacco is managed, they are both strictly regulated with control around retail sale, product standards, age verification. That’s how this needs to be managed,” he said.

Health Minister Mark Butler is due to meet with his state and territory counterparts on the issue once the agency has finished its review.

When launching the TGA consultation late last year, Butler said the government had not come to a view on whether it would pursue a licensed e-cigarette scheme like that in place in New Zealand. “But I don’t want to see anything off the table,” he said.