Couple transform their 1930s semi-detached house with a stunning modern extension in a £110,000 makeover on Your Home Made Perfect

A couple transformed their cramped 1930s family home on last night’s episode of Your Home Made Perfect.

Civil servants Lisa and Judy spent £110,000 completely renovating the two-storey property in Gosport, Hampshire, to make it bigger, brighter and more modern after growing tired of the lack of space and natural light downstairs.

They enlisted the help of architect Lynsey Elliott, who created that much-needed sense of openness by adding an extension to the back of the house that accommodated a larger open-plan kitchen-dining room, as well as a WC and stylish utility room.

Viewers were in awe of the staggering transformation, with one tweeting: ‘That is stunning! Absolutely love it! Judy and Lisa seem absolutely delighted – the natural light looks great too! Good job Lynsey! #yourhomemadeperfect’. 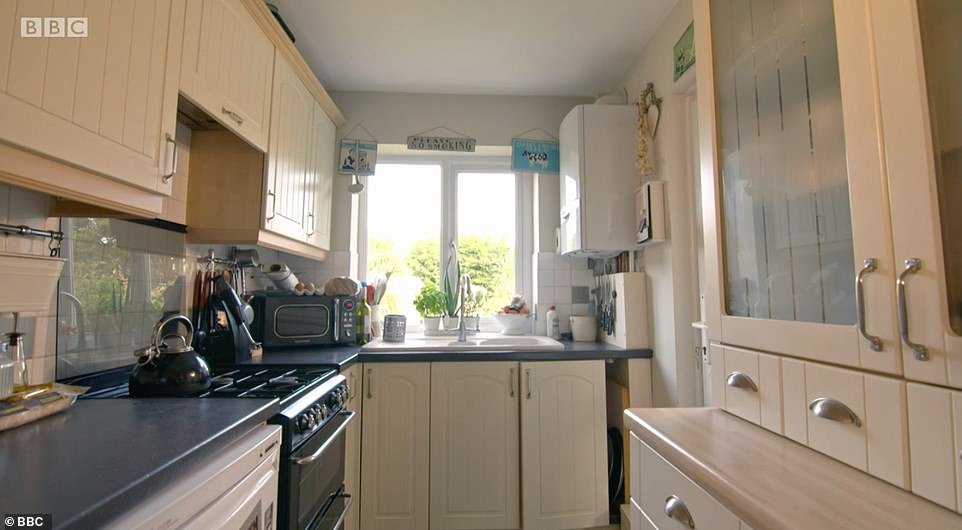 Before: The kitchen was a cramped after-thought at the back of the house and owners Lisa and Judy dreamed of more space 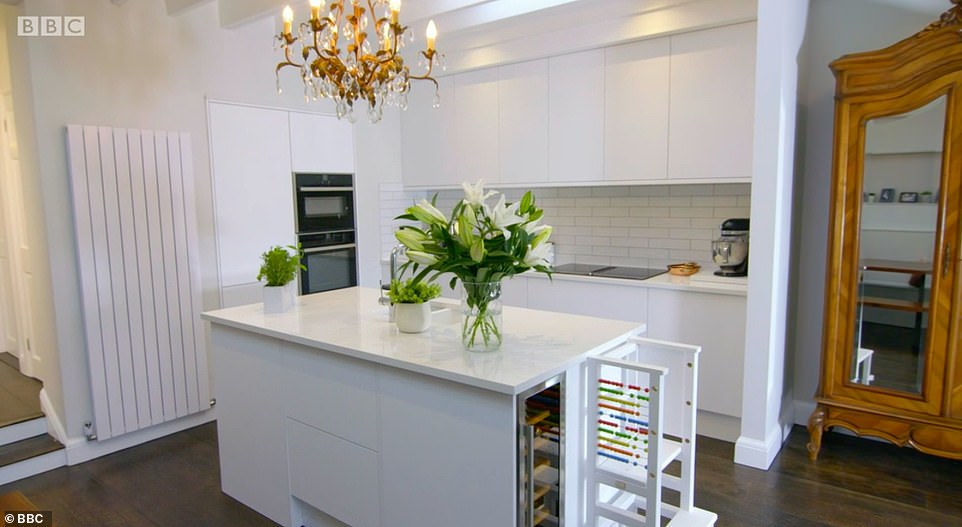 After: The bright and airy kitchen was incorporated into the open-plan living space in the new extension 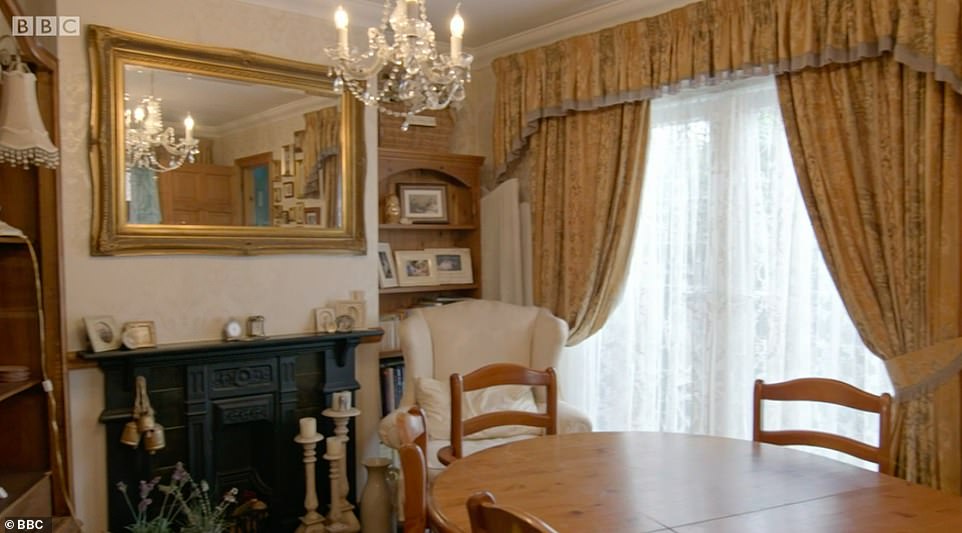 Before: Judy and Lisa loved to entertain but struggled for space in the dimly-lit dining room in their semi-detached house 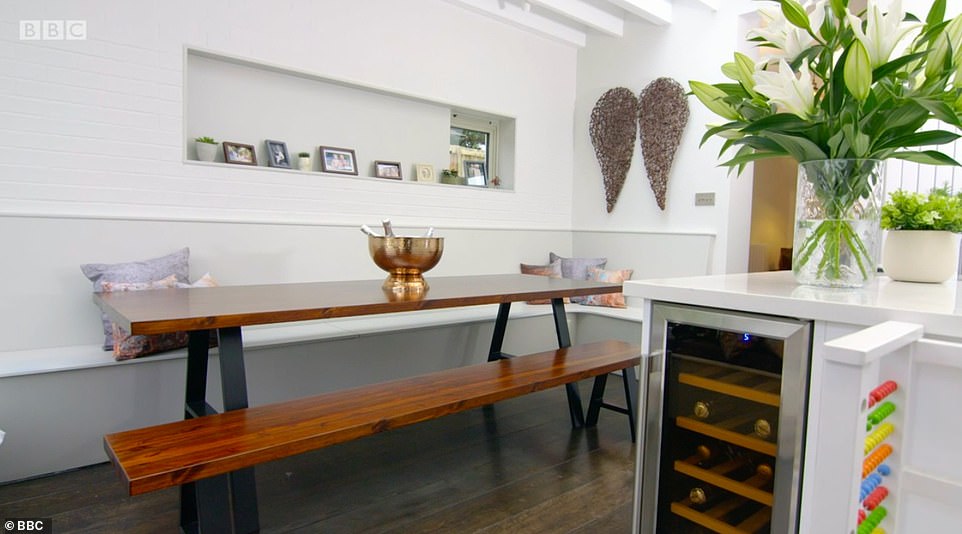 After: Bench seating allows the couple to fit friends and family around the dining table, including their two daughters 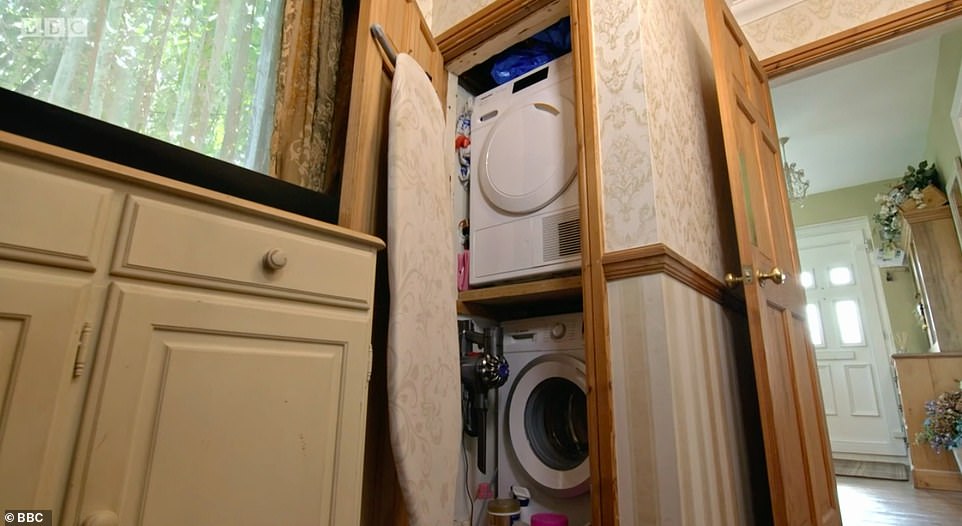 Before: The washing machine and tumble dryer were stacked on top of each other in a poky utility cupboard in a corner 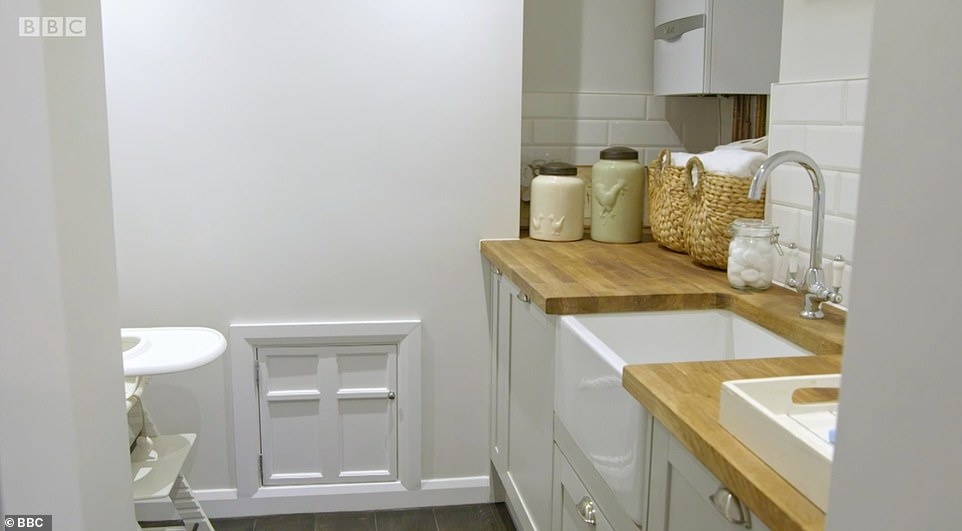 After: The downstairs extension created space for a separate utility room for the couple, giving a sense of space 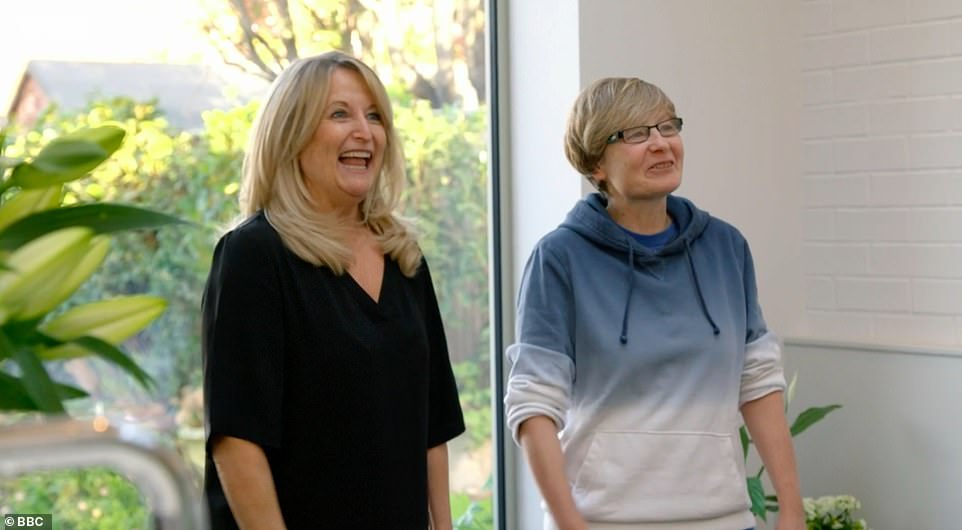 Delighted: Judy (left) and Lisa (right) were thrilled with the results of their makeover which went £55,000 over budget 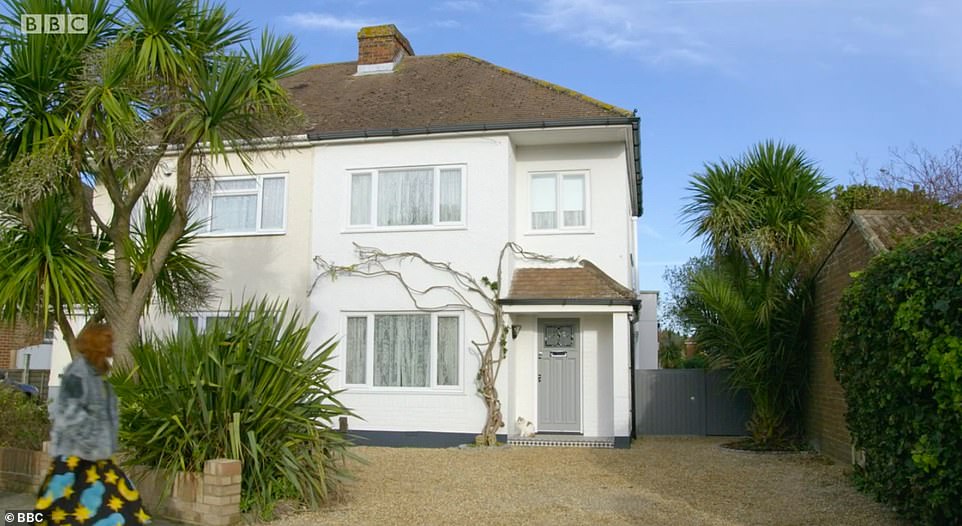 Fond memories: The couple wanted to stay in the house where they had raised their children (pictured) but needed a change

Another added: ‘A wonderful end product and that downstairs loo gives a nod to the owners’ love of “Froo Froo” but is stunningly done. #YourHomeMadePerfect.’

At the start of the episode, Lisa and Judy explained they had bought the semi-detached home in 1999.

The couple wanted to have more space to host gatherings for friends and family but didn’t want to leave the home where they had raised their two grown-up daughters.

They hoped the solution would be a clever renovation that would give them ‘room to breathe’ and space for their collection of ‘frou-frou’ Victoriana collectibles and furniture.

After viewing two designs from rival architects, the couple opted for Lynsey’s and set to work bringing it to life.

They initially set aside £65,000 for the project, including a contingency fund, but ended up spending £70,000. Once work began on the house they decided to widen the scope of the work, taking in the garden, and spent a total of £110,000. 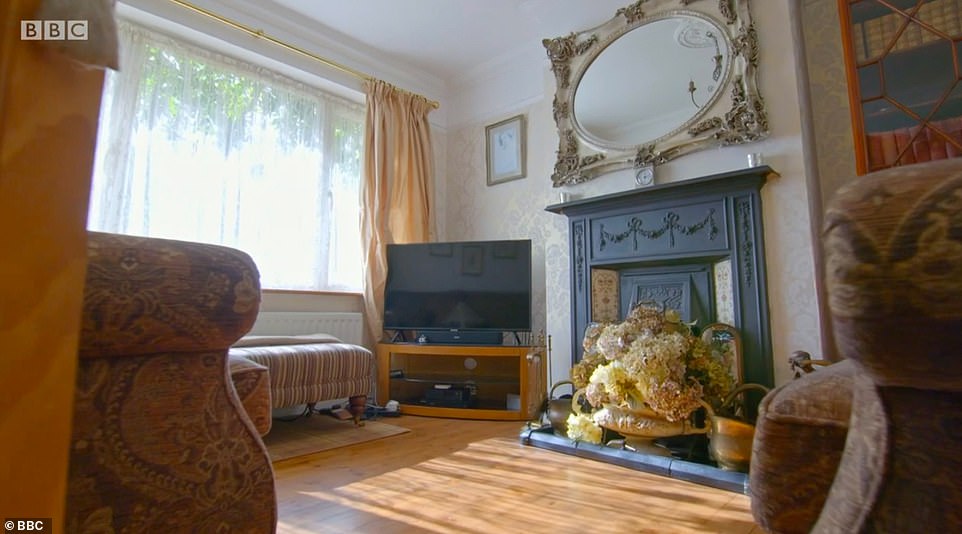 Cramped: The living room at the front of the house was full of happy memories for the family but was too small for their needs 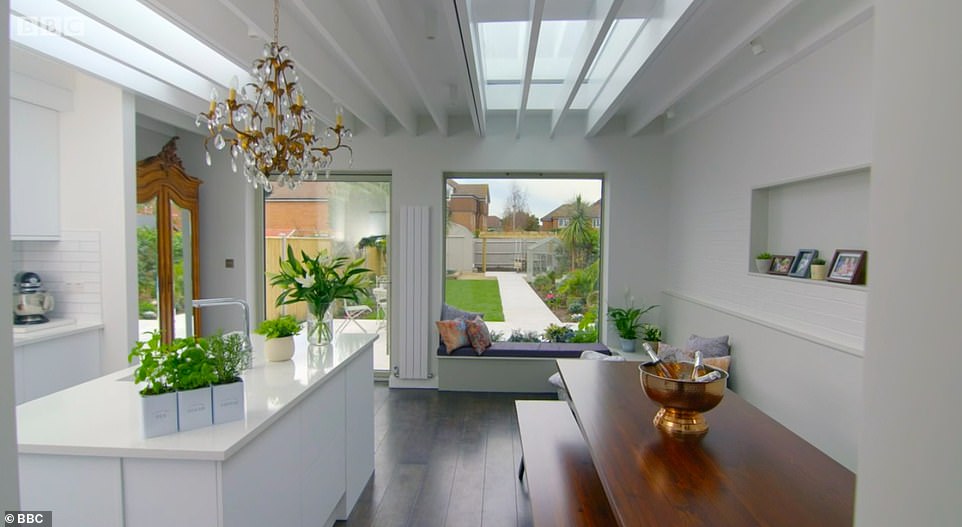 Bright and airy: Sky lights and picture windows flooded the space with natural light the couple so desperately wanted 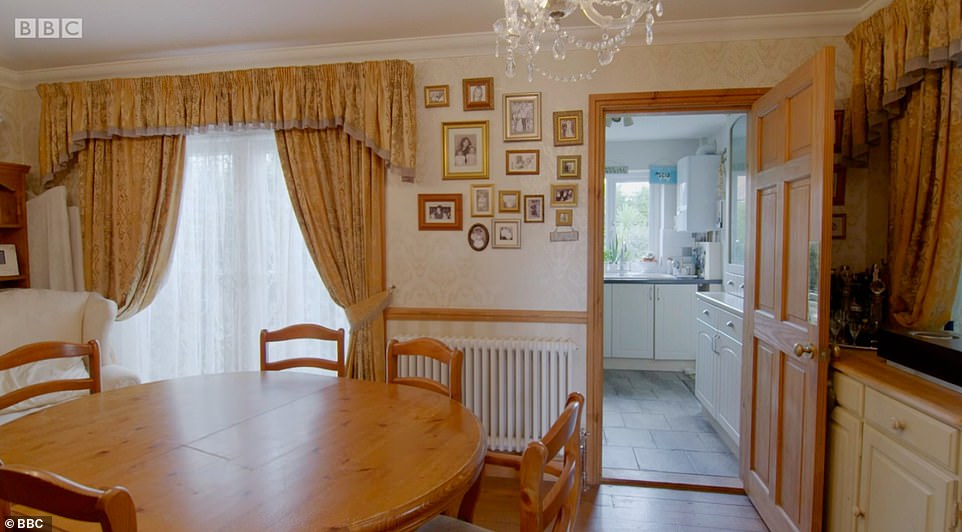 No space to socialise: The couple enjoy hosting loved ones but found themselves struggling for space in the dining room 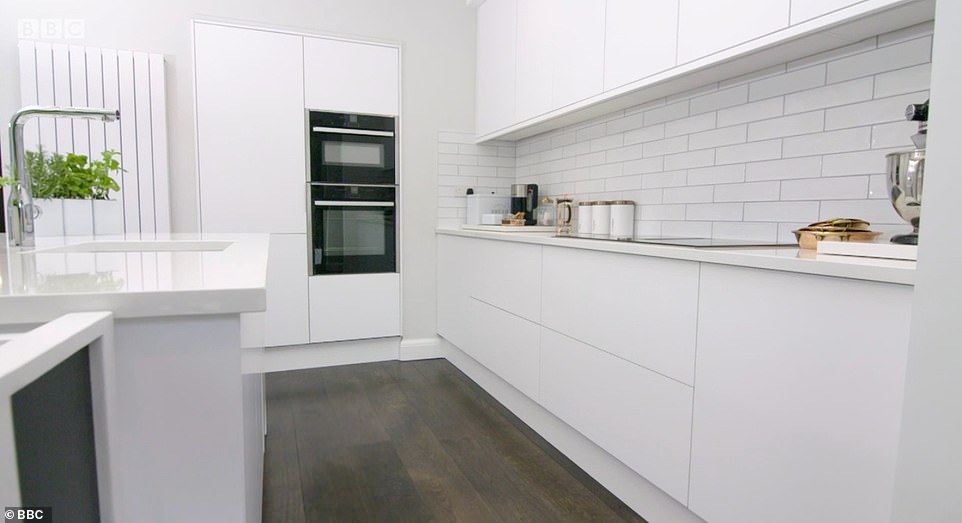 Opening up: With the new open-plan kitchen-living space there is lots of room to socialise and entertain

‘We just thought, if this is going to be for the next 20-30 years hopefully, then it’s well worth it,’ Lisa said.

Lynsey’s design removed the cramped individual room that had been such an issue for the couple and replaced them with a single, open-plan living space at the back of the house.

The cramped kitchen, which was less than 2m x 3m, was incorporated into the extension, creating a single room that was ideal for the super sociable couple.

Space was also created for a WC and a separate utility room downstairs, as well as a wider hallway.

Judy and Lisa were thrilled with the results.

‘It’s almost like a long, deep, comfortable contented sigh,’ said Judy, explaining how it feels to be in the new property. 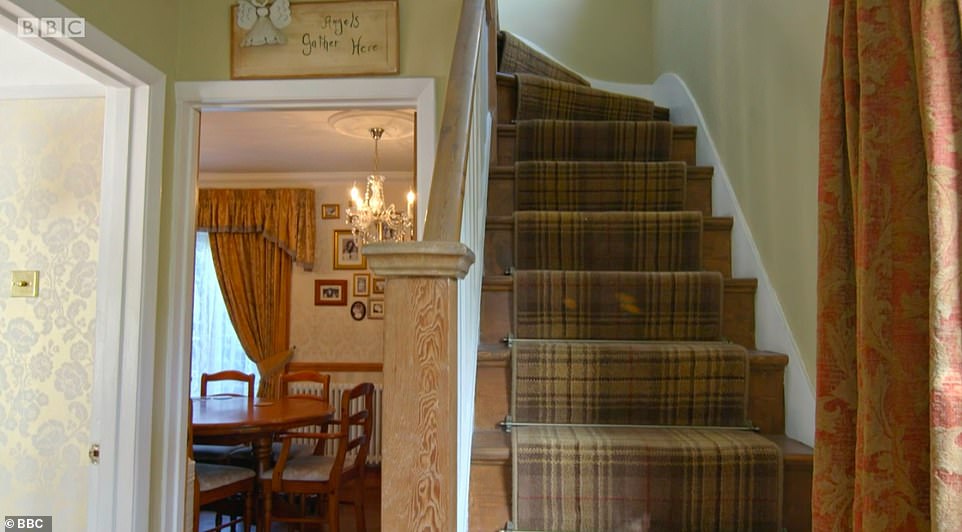 Outdated: The hallway in the family home felt dark and cramp and needed freshening up to suit the couple’s needs 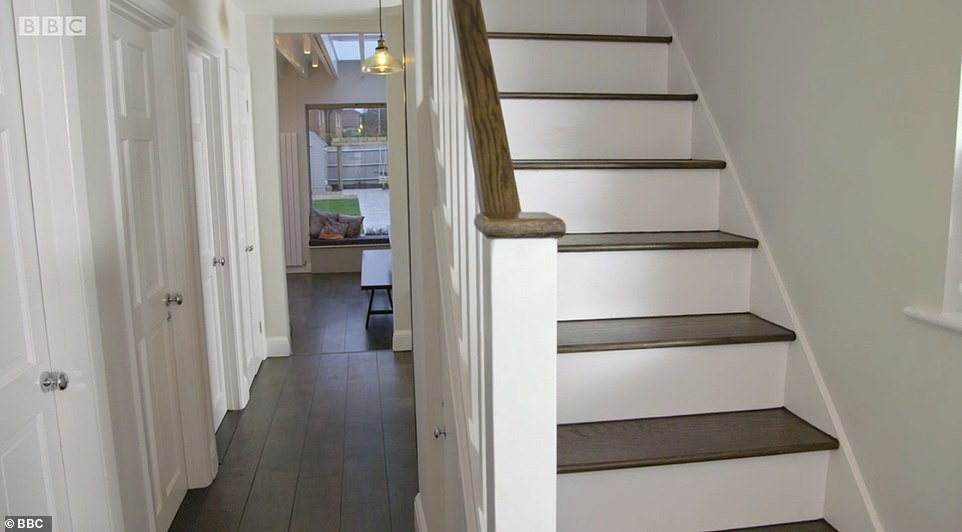 New look: The hallway was widened, the staircase replaced and new rooms were added as part of the renovation 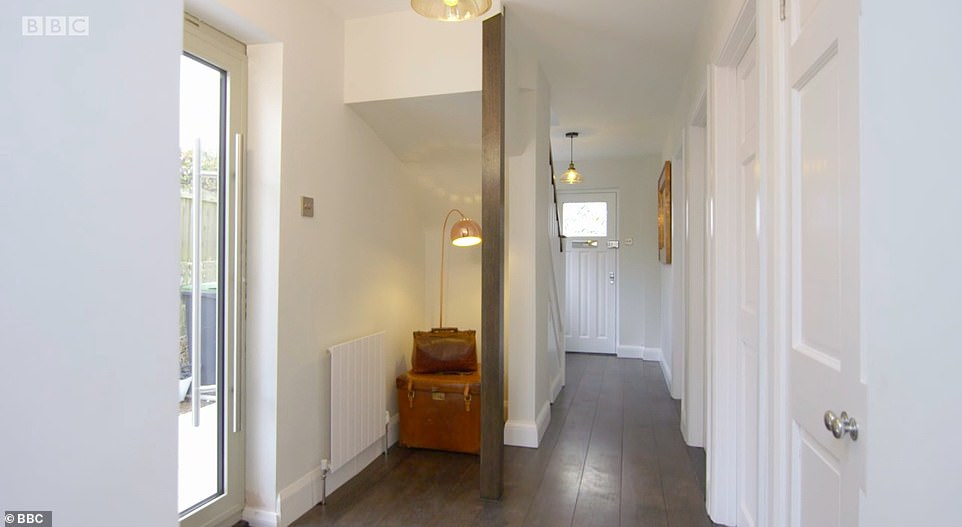 Transformed: The reconfiguration of the downstairs space allows for a second door outside (left) and more storage space