A woman who suffered 13 miscarriages reveals her baby joy after giving birth to a little girl following pioneering fertility treatment.

Laura Worsley, 35, from Kenilworth, devastatingly suffered eleven pregnancies which ended in the first trimester – and lost two boys at 17 and 20 weeks.

After much investigation, Laura was diagnosed with two conditions which were affecting her ability to have children.

Following a course of medication and steroids, Laura and husband Dave conceived for a 14th time and have since welcomed daughter Ivy, now nine months, into the world.

Speaking to the BBC, Laura said: ‘Even now, nine months on, I can’t believe she’s actually mine.’ 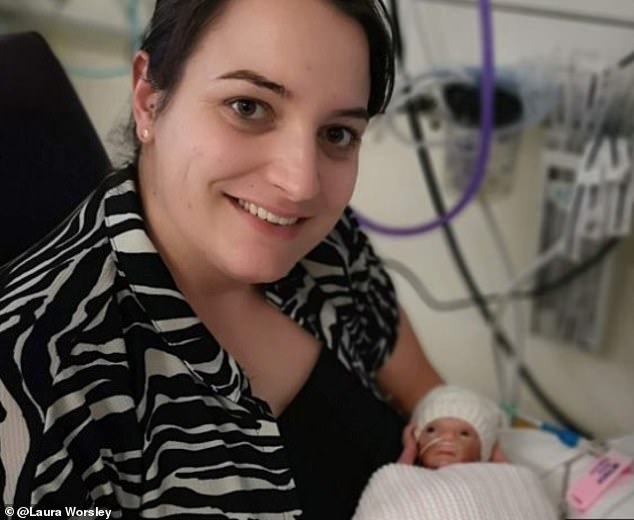 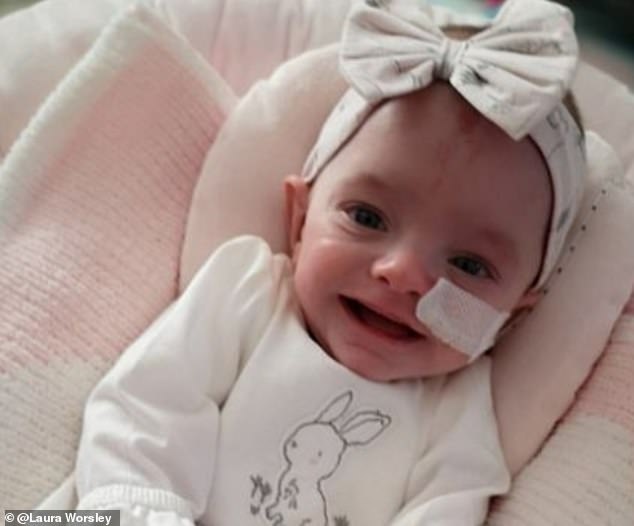 Ivy (pictured) was born via caesarean, weighing just 1.7 lbs, and was rushed to intensive care. She went from strength-to-strength and was allowed home 11 weeks later 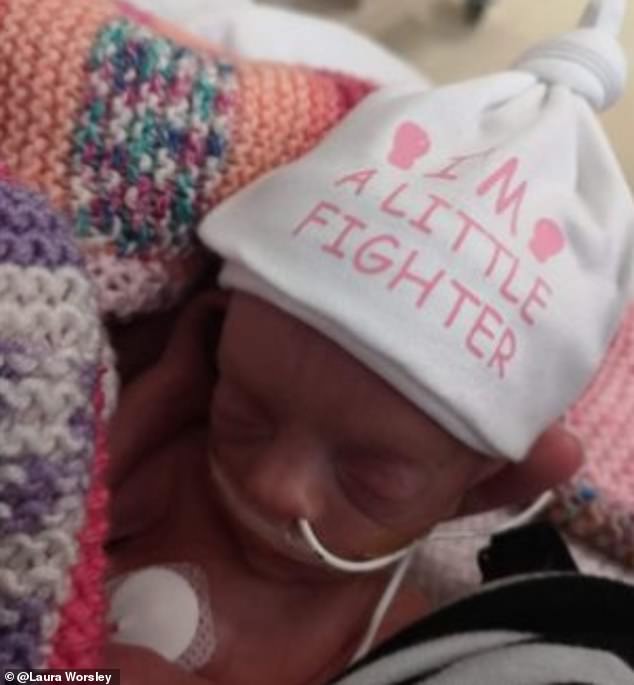 Laura and Dave had to wait three days until they were able to hold Ivy (pictured) for the first time, as they were warned she may develop sepsis

The couple suffered their first miscarriage in 2008 and while doctors suggested they keep trying, their fourth pregnancy tragically ended.

After being referred to hospital for tests, Laura was diagnosed with antiphospholipid syndrome – a condition which can cause an increased risk of having a miscarriage.

While the couple were advised that a high dose of folic acid may be the answer to their prayers, they had no joy.

They did have two pregnancies which progressed beyond 12 weeks, but in 2015 and 2017, they heartbreakingly lost their sons Graceson and Leo. 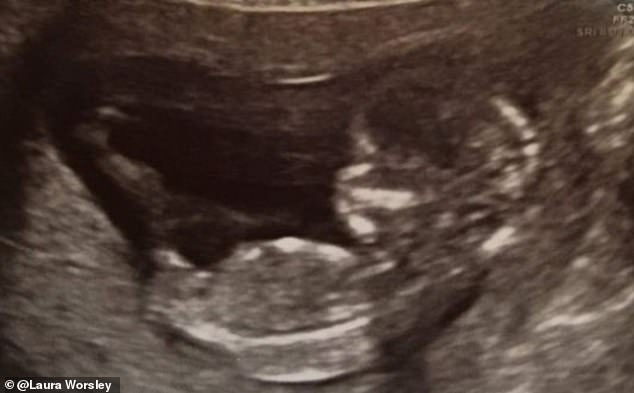 Speaking of the moment she and Dave tried for another baby following their 13th miscarriage, Laura told the BBC: ‘I told myself, this is the last time I’m doing this’ 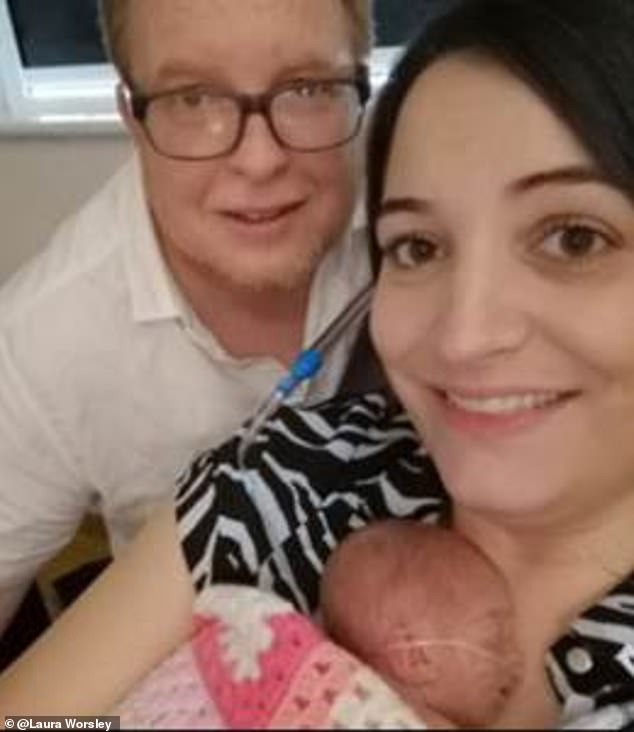 ‘I don’t know how I coped, to be honest,’ Laura told the publication.

And further bad news awaited as Laura was also diagnosed with Histiocytic Intervillositis (CHI), which causes the body to fight pregnancy.

What is  Antiphospholipid syndrome?

Antiphospholipid syndrome (APS), sometimes known as Hughes syndrome, is a disorder of the immune system that causes an increased risk of blood clots.

This means people with APS are at greater risk of developing conditions such as:

– Deep vein thrombosis (DVT), a blood clot that usually develops in the leg

– Arterial thrombosis (a clot in an artery), which can cause a stroke or heart attack

– Blood clots in the brain, leading to problems with balance, mobility, vision, speech and memory

– Pregnant women with APS also have an increased risk of having a miscarriage, although the exact reasons for this are uncertain.

– APS doesn’t always cause noticeable problems, but some people have general symptoms that can be similar to those of multiple sclerosis (a common condition affecting the central nervous system).

‘I wasn’t sure I wanted to try again. But Professor Quenby said she had helped women with this successfully,’ she explained.

‘I told myself, this is the last time I’m doing this.’

Following a course of medication to strengthen the lining of her womb – Laura and Dave conceived for the 14th time.

Fertility experts, including Professor Siobhan Quenby, then used steroids in an attempt to suppress Laura’s immune system, which is thought to reduce the number of ‘killer cells’ accused of causing miscarriages.

This enabled the pregnancy to proceed beyond 24 weeks, giving the baby a higher chance of survival.

Laura also took other medication to stop her blood from clotting – and when she was 30 weeks gone, her waters broke.

Baby Ivy was welcomed into the world via caesarean, weighing just 1.7 lbs, and was rushed to intensive care.

Laura and Dave had to wait three days until they were able to hold their newborn for the first time, as they were warned she may develop sepsis.

‘I look at her and think “miracles do happen,” Laura explained. ‘I’d read about other people’s miracles, and now I’ve got mine.’

‘Through my story I want to give others the hope and strength to carry on even when things seem impossible.’ 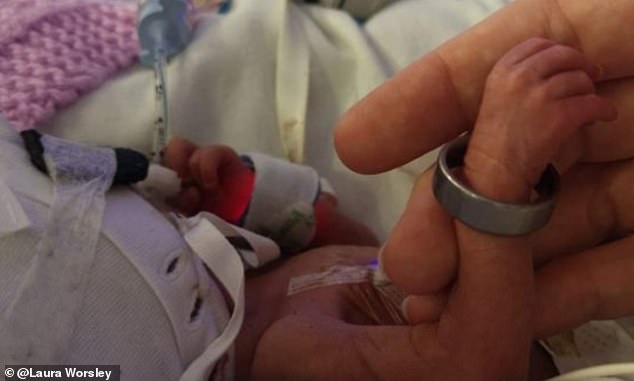 Laura told how she’s sharing her story to ‘give others the hope and strength to carry on even when things seem impossible.’ Pictured, Ivy in hospital 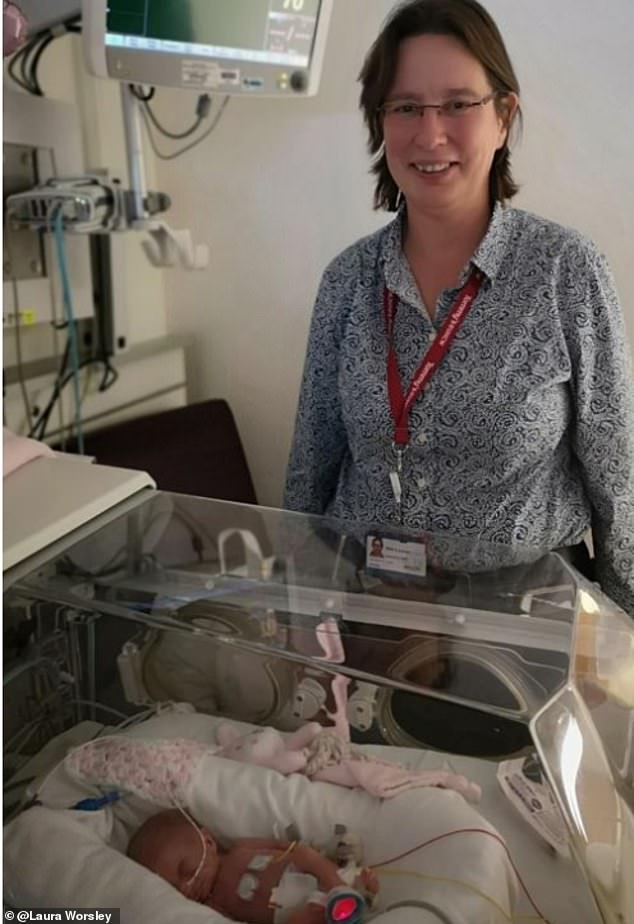 A team of experts, including Professor Siobhan Quenby (pictured with Ivy), used steroids in an attempt to suppress Laura’s immune system, enabling the pregnancy to proceed beyond 24 weeks