Glioblastoma is a brutal cancer of the brain, with a survival rate of less than 5 per cent five years after diagnosis. But collaboration between different experts could be the key to solving it and other medical mysteries.

The scientists designing cutting-edge cures for the aggressive brain cancer they need to be sure whatever they come up with doesn’t “go haywire” and kill off healthy parts of the patient’s brain. 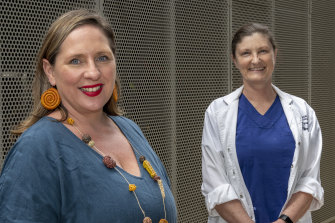 Associate Professor Misty Jenkins and Professor Kate Drummond are working on treatments for an aggressive form of brain cancer.

Professor Kate Drummond, who is head of neurosurgery at the Royal Melbourne Hospital, is part of a multidisciplinary team that has been working on cutting-edge personalised therapies using genetically engineered white blood cells to attack those tumours.

For this project, experts including protein chemists, structural biologists and neurosurgeons have joined forces to help work out the best way to deliver the treatments in the most targeted approach while minimising side effects for the patients.

The group is one of 17 multidisciplinary research teams across the country that have been awarded a combined $85 million through the National Health and Medical Research Council (NHMRC) synergy grant scheme.

Health Minister Greg Hunt said collaboration was the key to solving some of the largest medical mysteries today.

“Many of our greatest health challenges will only be solved by collaboration between people with different skills and different perspectives,” he said.

Lead Investigator Associate Professor Misty Jenkins, from Walter and Eliza Hall Institute of medical research (WEHI), said having that link with the clinical side through Professor Drummond helps ensure their therapies can be practically used in patients.

“We need to be able to design therapies that are very specific to the tumour, and are not going to go haywire and kill healthy brain tissue,” Professor Jenkins said.

“We’re working with protein engineers to design receptors from scratch, and then based on the primary tissue that the neurosurgeons provide, we can know what to target and so it’s the perfect marriage.”

Professor Drummond said the team also works on how to best deliver treatments, combining the research expertise with the practicalities of clinical care.

“A lot of people come up with some great treatments that don’t get into the brain unless you put them directly into the brain. And that may or may not be practical for the patient,” she said.

Professor Drummond said it has been “a labour of love”.

“You’ve got to have a passion for it, this is not always funded research or funded time,” she said.

Mr Hunt is announcing on Friday that each team will receive $5 million in funding over five years starting in 2022, for projects including research into new treatments for alcohol use disorder through the University of Sydney, and work on a new strategy for melanoma screening being done at the University of Queensland.

Eight of the grants totalling $40 million in funding have been directed to Victorian research teams, including work to tackle the country’s low rate of bowel screening participation and finding better interventions to improve the mental health of young people with disabilities.

“The projects funded today are exciting examples of what is possible when different disciplines and perspectives are brought together to solve a problem,” NHMRC chief executive Professor Anne Kelso said.

Half of the grants were awarded to teams with female lead investigators. Professor Kelso said this was great to see, but the council was continuing to work on ensuring there was equal representation of women across all career levels in the grant schemes.

Professor Drummond said the funding provides hope that patients with glioblastoma will have better treatments, and hopefully, longer lives.