That strange period of time is here, the week leading up to Christmas and into the new year, where everything seems both fast and slow all at once. Whether you are staying put, heading back home, or setting off across to the other side of the country for a holiday, it’s the perfect opportunity to go and see some of the great visual art on offer across the different states.

From pirates to video games, from a darkened room full of cobwebs, to a reconstruction of a family home, there’s something for everyone. 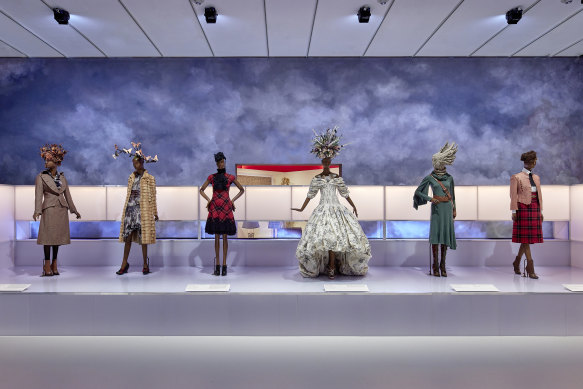 There’s a story about the late-designer Alexander McQueen – that he only needed to look at someone, before he could free-cut a perfectly fitted jacket for them out of an unmarked piece of fabric. This retrospective at the NGV looks back over McQueen’s career, putting his workmanship and skill front and centre. Our art critic says it is “set to be the blockbuster of the summer”. While you’re in the building, make sure to head upstairs to visit Broken Spectre, an extraordinary work of filmmaking that can’t be seen outside of a gallery. 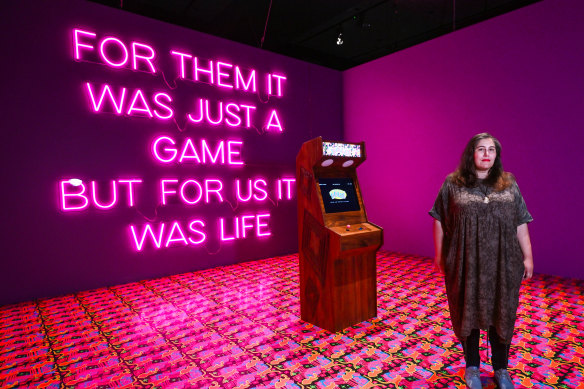 Jarra Karalinar Steel says her work is playful, but with “a little bit of anger”.Credit:Joe Armao

Bringing together eight different creators, the newest exhibition at ACMI, Australia’s national museum of screen culture, centres on First Nations art. Spanning film to video games, the exhibition is also accompanied by a series of events including tours, artist talks and workshops for games and dance. 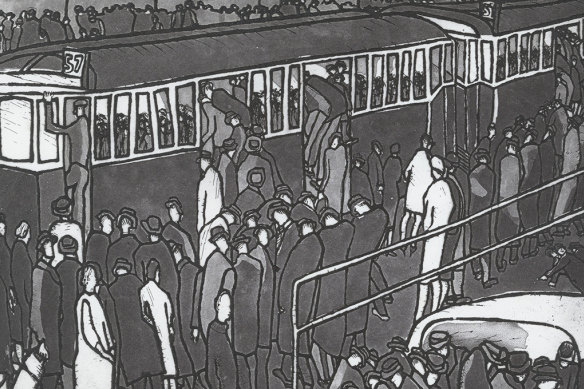 It seems at first like an unlikely pairing, but the longer you look, the more sense it makes. In this third outing of Mornington Peninsula Regional Gallery’s Collection+ series, the work of Julian Opie is paired with that of late Melbourne artist Judith Alexandrovics. “Both Opie and Alexandrovics create a snapshot of people in unremarkable moments,” says curator Angie Taylor. “It is a fascinating portrayal of being in the presence of a group but not known to each other.”

Under the Black Flag
Art Gallery of Ballarat, until January 22, 2023 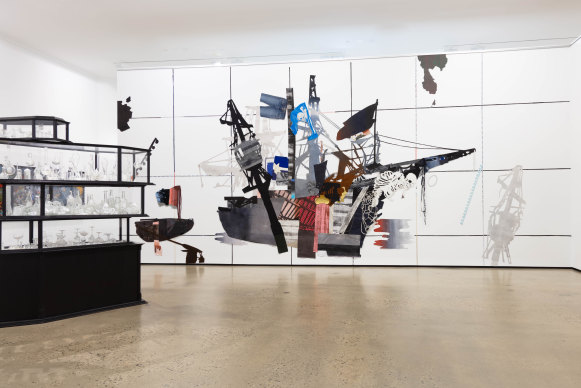 A work by contemporary artist Sally Smart on display at Under the Black Flag at The Art Gallery of Ballarat.Credit:Ben Cox

Under the Black Flag is all about pirates, but not perhaps in the way you’d expect. Drawn entirely from the Art Gallery of Ballarat’s existing collection, the exhibition tells the story of piracy from a few different viewpoints. There are works looking at female pirates, about colonialism, about the refugee crisis. The exhibition was sparked by the work of the Lindsay brothers, in particular Norman, the author and illustrator of The Magic Pudding, whose early fascination with pirates slowly evolved into a deeper exploration of morality and violence. 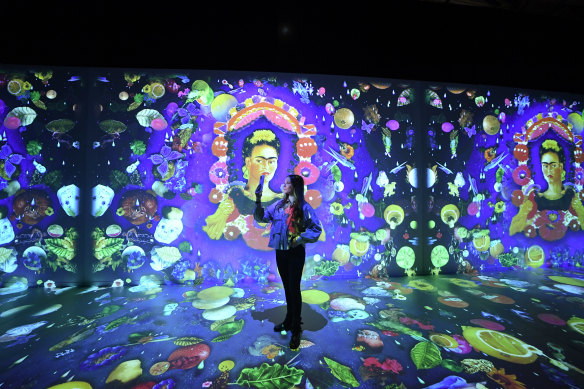 One of the big ticket items in this year’s Sydney Festival, this interactive exhibition in the cavernous Cutaway promises to take visitors beyond the art of the legendary Kahlo and deeper into her life and feminist philosophy. A creation of the Frida Kahlo Corporation and cutting-edge Spanish digital art collective Layers of Reality, it will employ holograms, 360-degree projections and virtual reality technology.

Adrián Villar Rojas, The End of Imagination
Sydney Modern, The Tank, until mid-2023 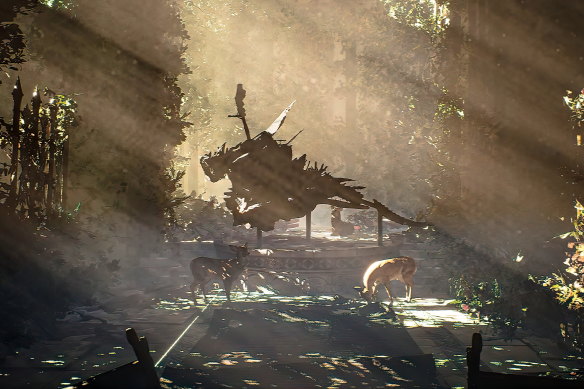 From a live simulation of the artist’s work.Credit:Adrian Villar Rojas

Don’t miss this chance to explore Sydney Modern, the city’s newest art space. The Tank is a former wartime oil storage facility underneath the stunning addition to the Art Gallery of New South Wales. Argentinian artist Adrián Villar Rojas’ installation is loud, high energy and disorientating, and takes advantage perfectly of the strangeness of this subterranean space.

Do Ho Suh
Museum of Contemporary Art, until February 26, 2023 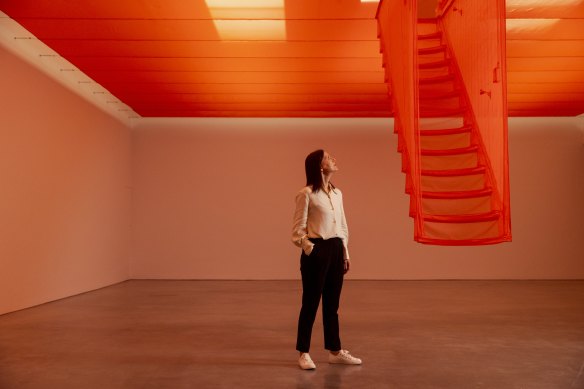 This remarkable show is one of the must-sees of the Sydney summer. A survey taking in three decades of veteran South Korean artist Do Ho Suh’s practice, the works unpick themes of home, identity and belonging. The centrepiece is an extraordinary reconstruction of his parents’ Seoul home made from paper rubbings, fabric passageways and a hand-stitched staircase. The effect is both poignant and other-worldly.

Siteworks: From a Deep Valley
Bundanon Art Museum, until March 12, 2023 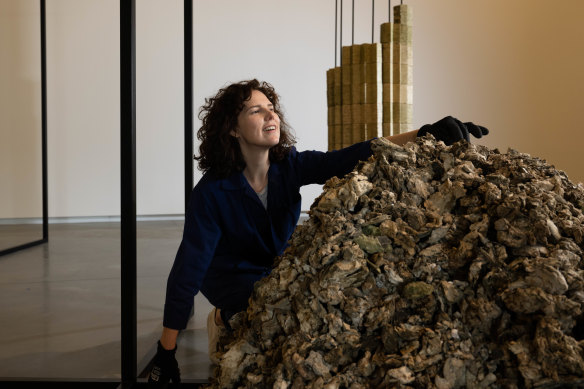 Climate change hangs heavily over Bundanon, which is part of the World Weather Network of artists producing “weather reports” responding to the climate crisis.Credit:Janie Barrett

Siteworks: From a Deep Valley brings together the work of 25 artists and 10 scientists to consider multiple aspects of the concept of the “weather report”. Continuing all summer and beyond and with three key weekends there will be exhibitions, talks, workshops and performance. Engaging and thought-provoking it may just be the excuse you’ve been looking for to visit this magnificent venue, the former home of Arthur Boyd. 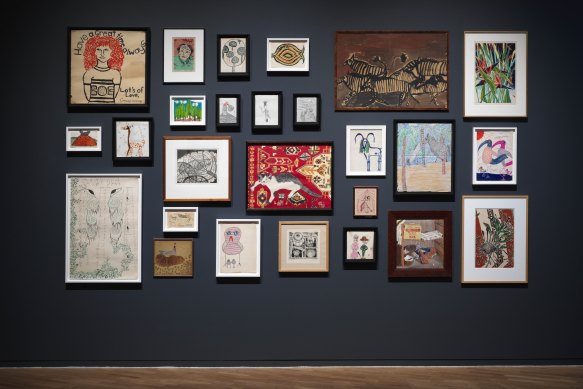 Sydney-based Cressida Campbell delights in elevating the everyday to another realm with her remarkable, virtuosic print and painted woodblocks. Sydney Morning Herald critic John McDonald, a long-term friend and supporter of Campbell, was liberal in his praise for this popular show. “It’s hard to imagine anyone not responding positively to Campbell’s inventiveness, to her skill with colour and composition, and to the truly staggering commitment of time and energy that has gone into these works,” he writes. 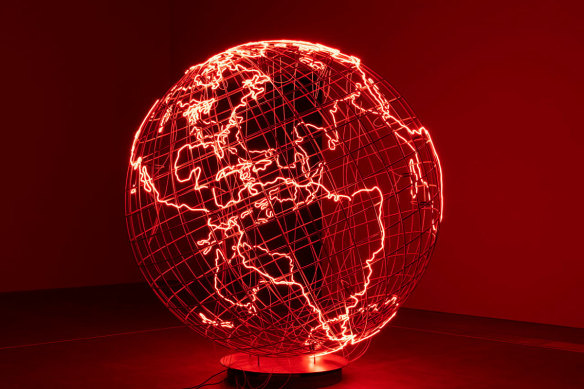 In one of the final rooms of Air at QAGOMA, visitors are invited to play a game. In front of them is a platform filled with objects – paintings, an inhaler, a mysterious metal box, a figurine in a glass case. All of these, somehow link back to the idea of air. It’s up to us to figure out how. It’s a nice way to tie everything we’ve just seen together. The exhibition, which takes up the entirety of the lower level of the gallery, brings together over 30 artists both local and international, and offers up different perspectives and interpretations on the theme of air, using sight, sound and event scent. There’s a work timed to a local construction site, another looking at the fallout from nuclear bomb testing, and another features living plants that need to be tended to daily. 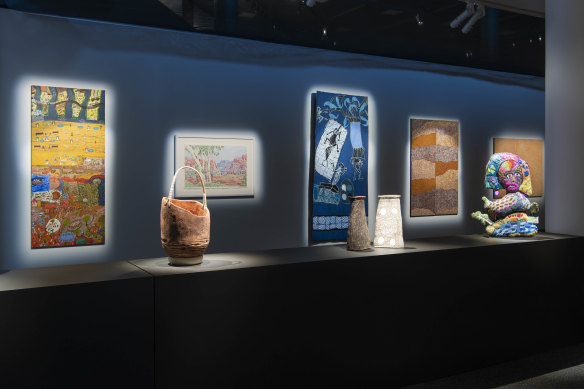 Telstra NATSIAA 2022 Installation, courtesy of MAGNT and the artists.Credit:Mark Sherwood

Each year, the Telstra NATSIAAs celebrates and showcases work by Aboriginal and Torres Strait Islander artists, not only through the awards themselves but through an exhibition featuring the work of the winners and finalists. See it now at MAGNT. Or, if you can’t make it in person, take a virtual tour here. 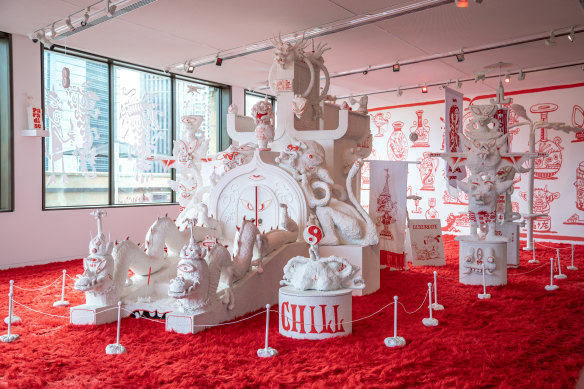 Upstairs at the Art Gallery of Western Australia is a portal – of sorts – to the fantastical land of Yeahnahnesia. The work of artist couple Yok and Sheryo brings (the fictional) Yeahnahnesia to life through “artefacts” collected on their travels to the fantasy island. “The premise of the exhibition is centred on relaxation …and balancing out life,” says curator Isobel Wise. Drawing on both Asian and Australian culture, Yeahnahnesia also includes many references specific to Perth, where Yok is from. The exhibition takes out the entire upper floor, which is covered in four-inch thick red carpet. Visitors are encouraged to take their shoes off at the door and completely immerse themselves in the exhibition, which reaches out not just across the walls and windows but even into the lift that transports you there. 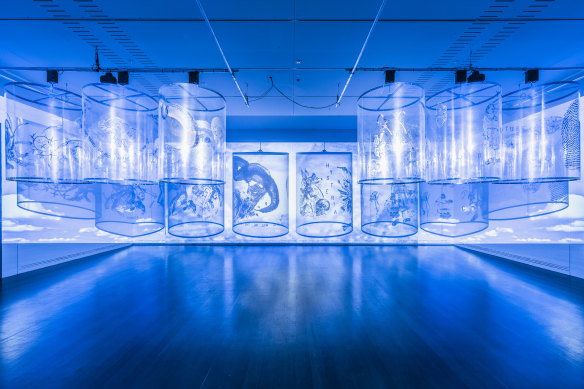 Gamepieces by Nalini Malani, at the Art Gallery of South Australia.Credit:Saul Steed

This sprawling exhibition highlights the storied – and ongoing – career of artist Nalini Malani. Hers is a name more of us should know. Starting with a series of animations that dance across the walls, and moving through film, photography and installations, activism, history, politics and playfulness collide. A major highlight is the titular Gamepieces, which brings together shadows, music and motion in one hypnotic work.

Tomás Saraceno’s Oceans of Air
Museum of Old and New Art, until July 24, 2023 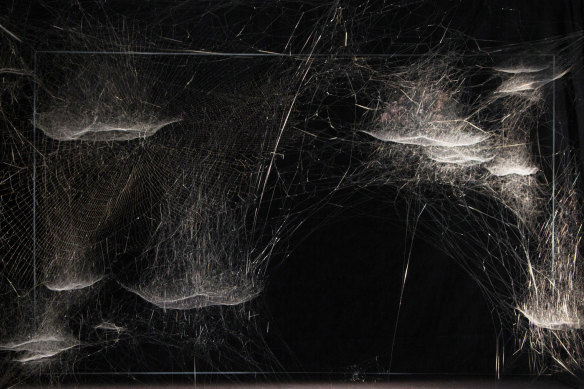 Tomás Saraceno is perhaps best known for his spiderweb artworks. He creates them in his Berlin studio by simply providing a metal frame and then “inviting” spiders to come in and spin their webs. The artist works only with social spiders – those willing to build on the work of others – the results are intricate and delicate worlds made of spider silk. Mona’s Oceans of Air features a room filled with these works, but the exhibition shows that Saraceno’s interests – and skills – stretch far beyond this as he uses dust, lasers, videos and even an adapted form of spider divination to explore ideas around relationships, the environment and interconnectedness.