Disability pensioner Ray Drury, the Heckler from the Hunter who bailed up Prime Minister Scott Morrison in a Newcastle pub, joins a noble line of insurrectionists who disturb politicians and make headlines.

There was Egg Boy, who in 2019 cracked an egg over the head of former far-right senator Fraser Anning, and there was the man who, in 2010, threw a shoe at former prime minister John Howard when he was on ABC TV. 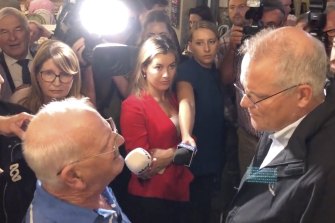 “If you have a go, you get a go” … pensioner Ray Drury has his go at the Prime Minister in a Newcastle pub. Credit:Twitter

Howard was doing a one-on-one episode of Q&A with host Tony Jones when the shoe-chucker apparently took issue with his remarks about his decision to involve Australia in the Iraq war. Jones, embarrassed, had the man ejected and apologised to Howard. Howard, ever the gent, ended up comforting Jones and telling him not to worry. The crowd booed the man as he was led out – the whole thing offended their sensibilities. And it left Howard looking good.

It’s probably not news that there are some old fellas in bars who, after a few 5pm sharpeners, feel moved to give the PM a piece of their mind. But the Newcastle pub incident dominated the news for good reason.

We find such encounters interesting because we rarely see our politicians do anything unscripted. We hardly ever see them in natural situations that have not been engineered by a team of media advisers. And we almost never hear them say anything that hasn’t been focus-grouped and spun by strategists.

In such confrontations we might see the mask slip.

But of course Morrison, who has been criticised heavily for what people say is a lack of empathy, had to smile and cop it when Drury accused him of breaking promises. Morrison listened to the 73-year-old politely for several minutes and tried to refer him onto his staff.

The confrontation ended when Drury jabbed his finger at the PM and told him, “You better f—ing do something!”

Morrison was ushered away.

The same evening a Labor-voting school teacher filmed herself with the PM calling him “the worst prime minister ever”. The video was widely shared. It was nasty and pointless – and therefore perfect for social media.

Morrison has accumulated so much political baggage it’s unsurprising he encounters angry voters when he meets the unwashed in pubs and on street walks.

There’s a strong chance such negative interactions will lead some voters to side with Morrison, to feel that people should get off his back. Morrison’s campaign team tried to spin it by saying the PM won’t lock himself in a “bubble” for the campaign as his opponent Anthony Albanese will.

Labor is running a very tight campaign and candidates are not allowed to speak to the media without permission from HQ.

The Liberal Party would love to be able to control thusly its MPs and members (and of course it has the same formal controls on media contact, all of it supposed to be run through party HQ). But the Liberals are having significant trouble keeping their people in the tent.

In the past week, the news has been dominated by the epic battles over Morrison’s 2007 preselection, and the contemporary preselections of various NSW candidates for the upcoming election.

Michael Towke was trounced for preselection in Cook in 2007 when the Liberal HQ refused to endorse him. He wasn’t running against Morrison in the original preselection vote, but Morrison ended up seizing the opportunity and taking the prized seat.

Liberal Party figures involved in that preselection say they had very good reasons for not wanting Towke to represent the party. Last week Towke accused Morrison of using his Lebanese ethnicity against him during that fight. The problem for Morrison is that many people would be willing to believe that of him, even if it’s not true – and he vehemently denies it.

British journalist Jeremy Paxman has a theory that politicians are simply a different class of people to the rest of us. He wrote a book about it, The Political Animal. Intra-party stoushes such as the Towke matter and, on the Labor side, the nastiness following the tragic death of Kimberley Kitching, lend weight to the Paxman theory.

Ordinary people don’t usually carry bitter enmities with them for decades. Most ordinary people don’t despise their colleagues and connive to undermine them. They don’t hate the people in their team more than the people they’re supposed to be playing against. They don’t have their funerals dominated by the conflicts they fought in their professional lives, and they don’t take members of their own organisation to court, and then appeal, and then appeal again.

Politicians need to have a high tolerance for conflict, and an acceptance of confrontation, that most people would find way too stressful. This makes them an uncommon breed, and means that many decent people drop out of the game, or don’t attempt it in the first place.

Which brings us back to Ray Drury.

He described himself to the PM as an ordinary, decent person who worked hard all his life. He was supposed to be the guy who benefited from Morrison’s “If you have a go, you get a go” formulation of Australian values. And yet his frustration with the bureaucracy of government and the cant of politicians was evident.

Morrison, clearly someone who has dealt with a lot of confrontation and conflict in his career, was in a position where he couldn’t dominate his opponent.

We watch our politicians closely in such moments because we are trying to work out if, deep down, they’re actually decent, or just pretending to be.