Telecommunications companies have failed to provide data on the capability and location of their assets like phone towers and the lack of information is risking the lives of emergency services personnel, says Emergency Management Minister David Littleproud.

Mr Littleproud said he wrote to Vodafone, NBN, Optus and Telstra in November and they still had not provided the information. He singled out Telstra chief executive Andy Penn, who he said had made a personnel commitment to provide the data. 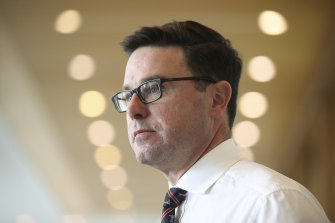 “I am disgusted that Andy Penn has not made good on Telstra’s commitments even after a personal conversation with him that he would not put Telstra’s commercial interests ahead of the safety of Australians,” Mr Littleproud said.

Mr Littleproud said emergency service personnel need to know where telecommunication infrastructure is and what capabilities it has when they make “life and death decisions” during an emergency.

“These are strategic decisions emergency service personnel have to make, to make sure communications stay alive between not only their personnel but the community.

“Telstra, along with Optus, NBN and Vodafone owe it to our emergency services workers as well as to the broader community whose lives they are endangering to provide this critical data,” he told ABC radio.

Mr Littleproud rejected telcos concerns that sharing information about the capabilities of certain assets could damage their businesses.

“We’re just saying to telcos, we will protect your commercial rights, but just trust our fire commissioners to have that information, to be able to put on a map, to be able to make the right decisions for our people,” he said.

“Existing processes for facilitating coordination and information sharing between critical infrastructure operators and government are not necessarily working as effectively as they need to be, and that there are opportunities for improvements to be made,” the report said.

Mr Littleproud announced on Tuesday he will track publicly progress made by federal and state government’s on their response to the commission, which made 80 recommendations. The Morrison government has committed to implement all of them.

The commission called for new laws to enable a national emergency to coordinate state and federal responses to natural disasters, creation of a national aerial waterbombing fleet and a national resilience and recovery body.

The tracking document will be published on the Department of Home Affairs website.