As they finally back Theresa May’s withdrawal agreement, Jeremy Corbyn and John McDonnell expose themselves as the most dishonest double act in our modern political history, says DOMINIC SANDBROOK

Ever since Jeremy Corbyn and John McDonnell took control of Her Majesty’s Opposition, they have tried to portray themselves as men of principle. And when challenged about their hard-Left opinions, their enthusiasm for IRA bloodshed, Palestinian terrorism and Marxist economics, their disciples have always fallen back on the same mantra.

Jeremy and John are men of conviction, the Corbyn cultists say. Whatever you think of their opinions, at least they tell you what they think. Hence the self-congratulatory tagline of the video produced by Mr Corbyn’s cronies after he became Labour leader: ‘Straight talking, honest politics.’

Four years later that tagline has a bitterly ironic ring. For in the last few days, Mr Corbyn and Mr McDonnell have been exposed as perhaps the most cynical and dishonest double act in our modern political history.

How else, after all, can you make sense of Mr McDonnell’s promise that if elected, Labour would support a tweaked version of Theresa May’s Withdrawal Agreement with the EU – the very same agreement against which he and his Labour comrades voted three times on January 15, March 12 and March 29? 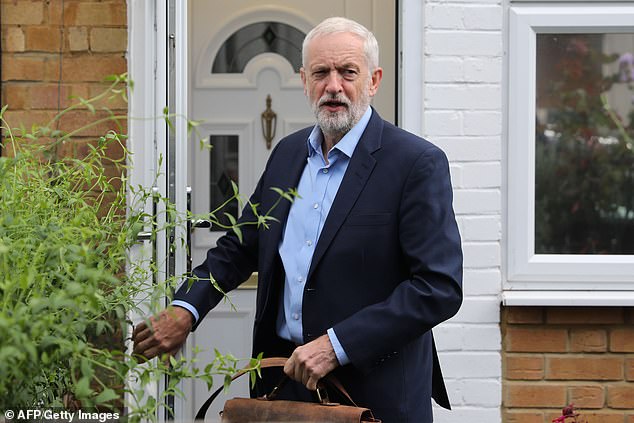 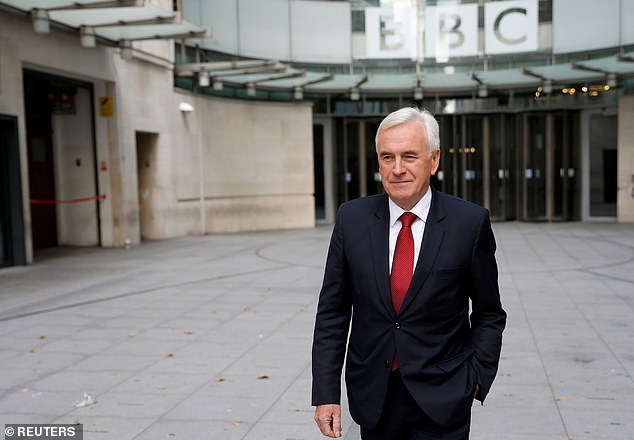 Yes, you read that last sentence correctly. As the Shadow Chancellor told the BBC’s Andrew Marr on Sunday, Labour’s latest Brexit strategy is that, if elected, they would go to Brussels to secure some cosmetic changes to Mrs May’s much-maligned exit deal.

Then a Corbyn government would put the deal to the British people in a second referendum – although, in a twist inviting well-deserved ridicule, both Mr McDonnell and the Shadow Foreign Secretary, Emily Thornberry, have said they would urge people to vote Remain instead.

The risible spectacle of Ms Thornberry trying to justify this madness on Question Time last week was one of the highlights of the entire Brexit shambles. ‘So you would be campaigning against your own deal?’ asked an incredulous Fiona Bruce, while the ludicrous Ms Thornberry gulped and wobbled like a stranded seal.

For me, though, what is really astounding is the blatant cynicism, the sheer brass neck, of Labour’s plan to revive Theresa May’s deal. After all, Labour MPs have had three chances to vote for the deal already.

Had they taken one of them, we would already be out of the EU. Not, perhaps, on the terms preferred by hardline Brexiteers – but at least we would be out and the wrangling would be over.

Even though I voted Remain, I always thought Mrs May’s deal was the best compromise available, respecting the British people’s decision to leave the EU without blowing up our economy in the process.

But Labour could not find a good word to say about it. Mr Corbyn’s neutered nodding dog, Sir Keir Starmer, claimed that the deal was totally ‘inadequate’, adding: ‘Why on earth would you back a deal as bad as this one?’ 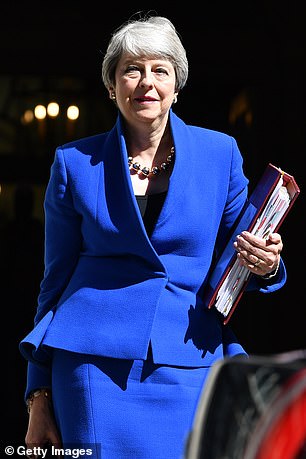 Even now, Labour’s website boasts a page presenting ‘Six reasons why Theresa May’s Brexit deal is bad for Britain’, claiming – entirely wrongly, in my view – that it ‘puts jobs at risk’ and ‘could pose a national security threat’. So why the volte-face? The answer is very simple: Jeremy Corbyn and John McDonnell will say and do anything, no matter how dishonest, to damage the Tories and get into power. Contrary to their pious claims, they don’t care about the national interest. All they care about is the chance to put their student-union politics into practice.

Indeed, this shameless dishonesty has characterised their attitude to Brexit right from the beginning. As all the world knows (but as Mr Corbyn will not admit), he has always been one of life’s Leavers.

Like his political master, the late Tony Benn, he regards the EU as a capitalist conspiracy, blocking the kind of wholesale nationalisations, confiscations and controls that he thinks necessary to kick off a British socialist revolution.

But because so many of his adoring young voters are Remainers, Mr Corbyn lied about this during the election campaign, pretending that he had become a convert to the joys of Brussels. And ever since June 2016 he has equivocated between respecting the result and talking vaguely of a second referendum.

You might wonder how the Leader of the Opposition could justify his failure to take a clear position on the single defining question of the day. Once again, though, the answer is very simple.

Mr Corbyn does not really care about Britain’s place in the EU, any more than he cares about the health of our economy. In his simplistic, pseudo-Marxist view of the world, all that matters is the crusade against the Tories, the top-hatted agents of wickedness.

To get the Tories out, anything is permissible. Lying, cheating, changing his mind: it doesn’t matter, as long as it serves the greater good. For then, once he’s kicked out the Tories, he can get on with the real job of redistributing wealth, renationalising the utilities, closing down private schools, putting up taxes and disarming the military.

The problem with all this, as the Labour leadership have discovered, is that the British people are not fools. Most of us, listening to Mr McDonnell’s sanctimonious homilies and Ms Thornberry’s patronising lectures, have long since realised that these people are lying to us, because they change their position at least once a month. 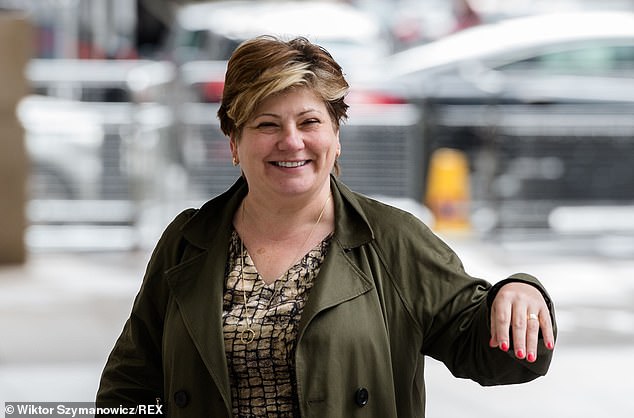 Even on the issue of an election, Labour’s leaders have been exposed as deeply dishonest. For months Mr Corbyn and co. told the cameras that they didn’t want a second referendum, because they wanted a General Election instead.

When Boris Johnson announced the impending prorogation of Parliament, they went into hysterical overdrive, shrieking ‘Stop the coup!’ and demanding an election straight away. And what happened next? When Mr Johnson proposed an election, Labour said no – the first instance in British history of an Opposition deliberately turning down the chance of a General Election.

The good news is that all this has done immense damage to Mr Corbyn’s reputation. At the beginning of this year, Labour’s poll standing was about 40 per cent. Today they are becalmed in the mid-20s and struggling to fend off the Liberal Democrats.

The bad news, however, is that these mendacious hypocrites still have a decent chance of forming the next Government, since the split on the centre-Right between the Tories and the Brexit Party could still allow Labour to pick up dozens of Leave-voting working-class seats. 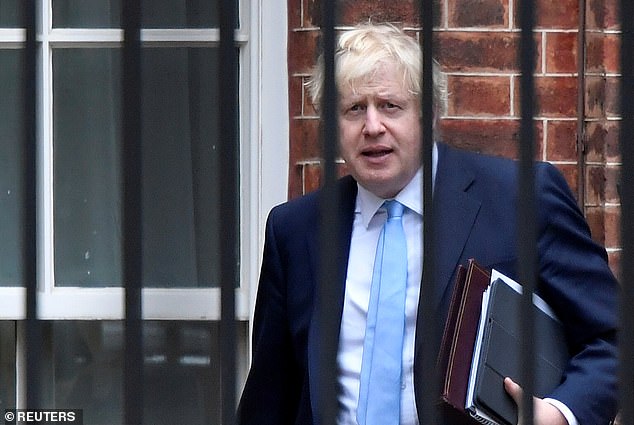 When Mr Johnson (pictured above) proposed an election, Labour said no – the first instance in British history of an Opposition deliberately turning down the chance of a General Election

And if, by some horrible mischance, Mr Corbyn found himself in Downing Street, I think it highly unlikely that he would become an honest man overnight. Politicians do not change when they become Prime Minister; they simply become exaggerated versions of themselves, as Boris Johnson is currently proving.

Of course Mr Johnson is unlikely to win any prizes for resplendent personal integrity. The difference, though, is that on Brexit, and indeed on politics more generally, everybody knows where the Prime Minister stands.

By contrast, Jeremy Corbyn and John McDonnell have done everything possible to disguise their true colours. Their aim is to work their way into Downing Street by stealth, subordinating everything else to their crusade to get their hands on the levers of power. And if that means reversing course completely and voting for Theresa May’s deal after all, so be it.

And one last, even more disturbing thought. If Mr Corbyn and Mr McDonnell can sink to such cynical depths on Brexit, what would this dishonest pair be capable of when it comes to your taxes, your pension and your children