The great escape! Cheeky endangered red panda who made his SECOND bid for freedom in three months from his wildlife park home forces a dramatic roadside rescue

A naughty red panda who made his second bid for freedom from his wildlife park enclosure in three months has been recaptured in a dramatic roadside rescue.

Seven-year-old Kush previously went missing from The Curraghs Wildlife Park in the Isle of Man in October, and was on the run for three weeks before he was caught.

On Wednesday last week the endangered mammal managed to get out yet again and was spotted by members of the public several times before he was rescued from a tree on Saturday.

He’s now being cared for in the park’s hospital unit and enjoying some ‘panda cake’, but is said to be unharmed. 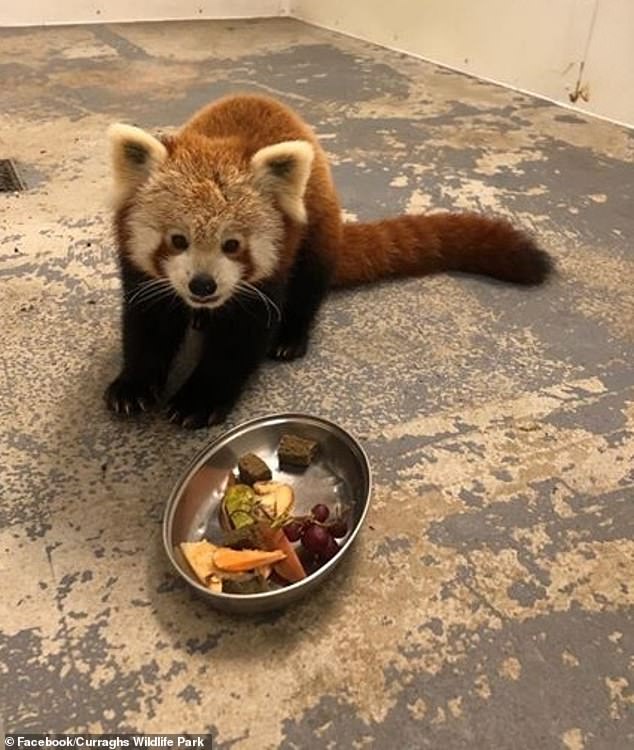 Seven-year-old Kush previously went missing from The Curraghs Wildlife Park in the Isle of Man in October, and was on the run for three weeks before he was caught. This time he was out for three days before he was recaptured (pictured on Saturday)

The Curraghs park manager Kathleen Graham told FEMAIL: ‘We’re keeping him in just now to keep an eye on him but he’s fine, he was quite hungry. He tucked into lunch as soon as he got back.’

Kathleen added that Kush’s escape this time round was not connected to the first time he got out.

‘We’re in the final throes of our investigation,’ she explained. ‘The first time was a branch that had snapped off and come down to cause a bridge for him to walk out.

‘It’s not been a branch or a failure of the enclosure but we’ll have a statement soon about it.’

Meanwhile an Facebook page has been set up in Kush’s honour, sharing amusing posts and statuses about his great escape. 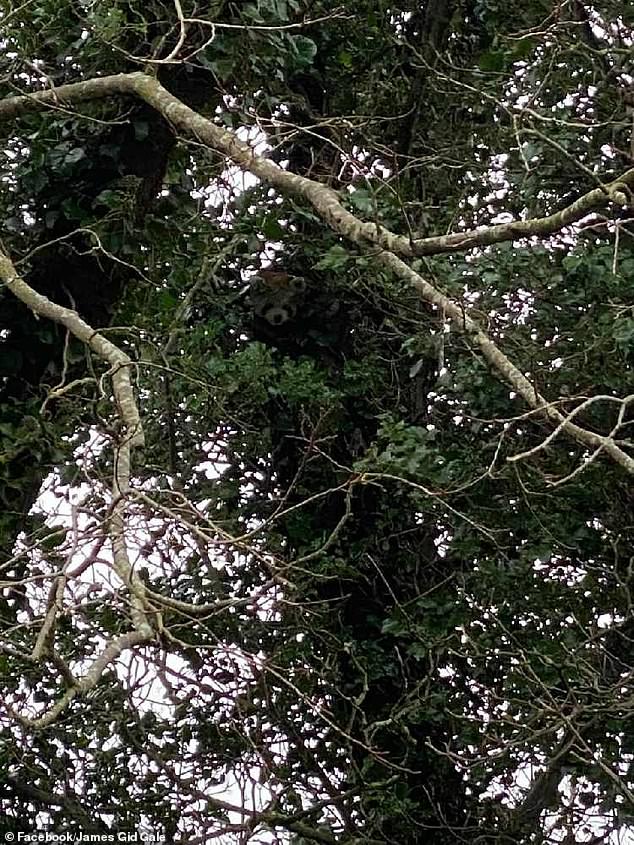 Speaking about the rescue, which was caught on camera by local resident James ‘Gid’ Gale, Kathleen told how they received a call from a member of the public claiming they’d seen Kush up a tree opposite the park.

‘They’re very good at hiding,’ she admitted. ‘The first sightings were on the Friday, where he was seen in the forested area opposite from the park.

‘By the time the team got up there, they searched but could not find him.

‘On Saturday we got the call that he was outside the park and there he was, up the top of a tree.

‘I think he was actually trying to come back, but the road was a worry for us so we had to get him back before any ill harm came to him. 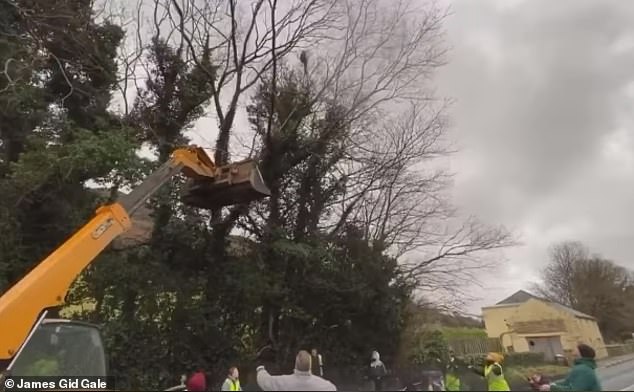 The main road outside the park was shut for several minutes while the rescue took place, with members of the public, the police and off-duty contractors pitching in to help 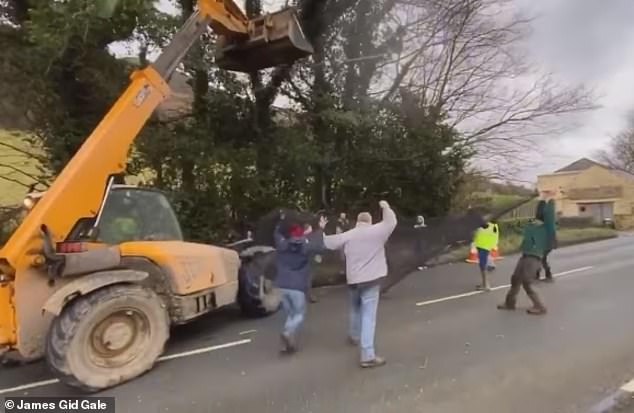 ‘The digger was there to stop him from quickly moving onto another tree. We had him on a branch in a good spot where we could bring him down safely, so we didn’t want him moving away from that.’

The main road outside the park was shut for several minutes while the rescue took place, with members of the public, the police and off-duty contractors pitching in to help.

A pole saw was used to cut the branch enough to make it give way for Kush to come down into the net below.

Red pandas, which are roughly two-foot long, are an endangered species; according to the World Wildlife Fund, there are less than 10,000 left in the world, with the population having declined by 50 per cent over the last 20 years. 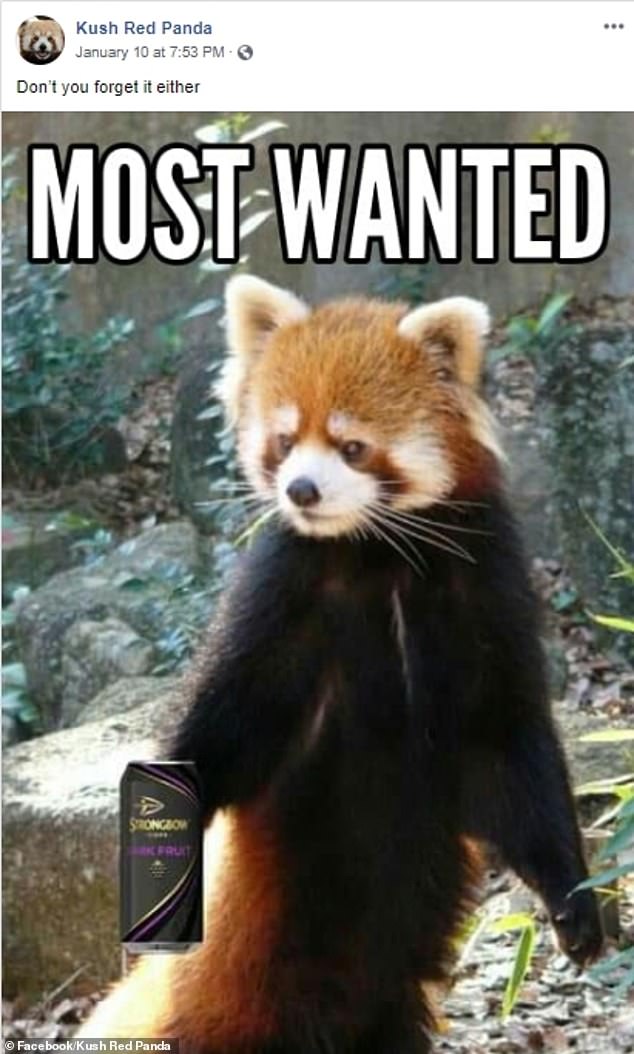 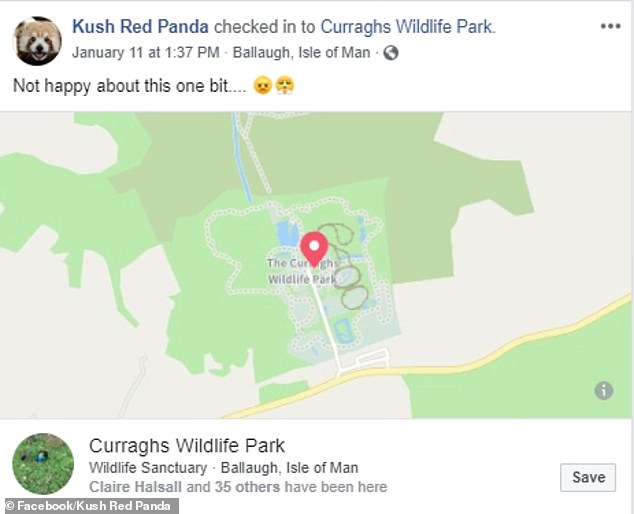 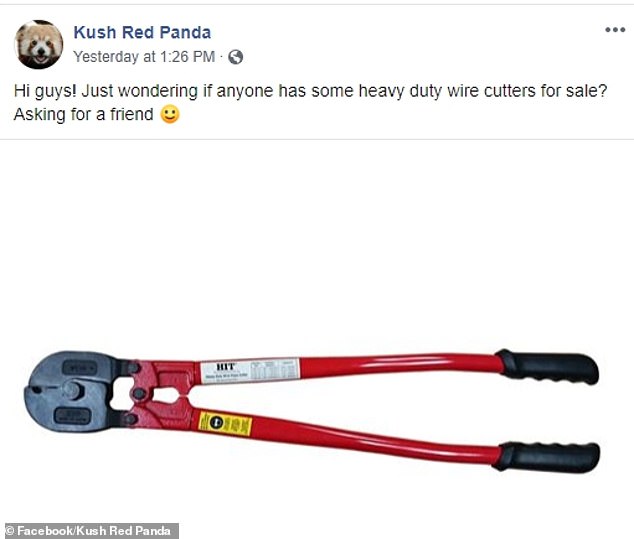 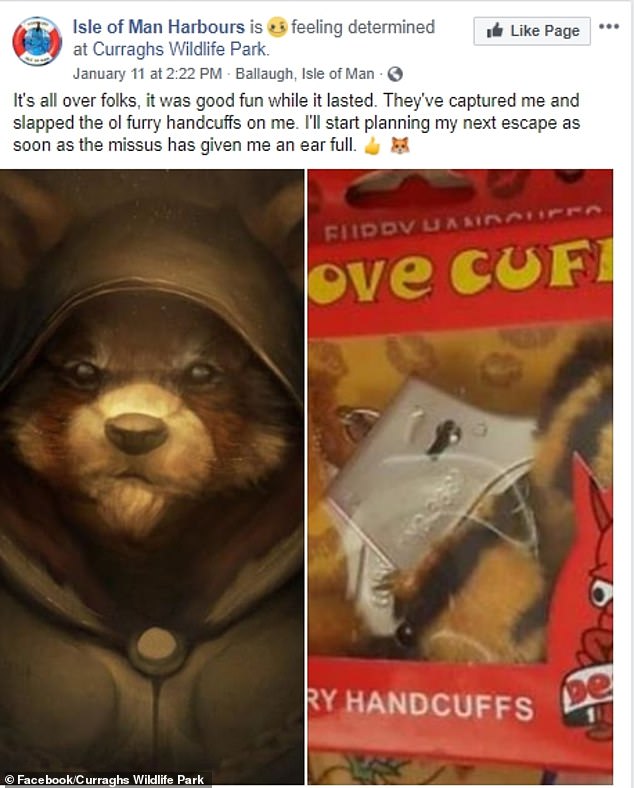 A Facebook page – Kush Red Panda – has been set up in the cheeky mammal’s honour, sharing amusing posts suggesting his contempt at being captured

They live predominantly in Nepal, making homes in high-altitude forests with lots of bamboo plants, as well as northern Myanmar, southern Tibet and central China.

Mischievous Kush was born in the Highland Wildlife Park in Scotland and was given his name there, and the Manx park decided not to change it.

He’s been resident at The Curraghs for around six years and shares an enclosure with Frisco, an old female panda going on 16, and a young panda called Sara who is about to be introduced to Kush.

‘She’s just coming up to breeding age now,’ Kathleen explained. ‘Although he’s been with Frisco for a few years, there’s never been any love there!’

On his return to the park, Kush was treated to some ‘panda cake’ – a special mix made for the species from zoo food – as well as some fruit, sweet potato and fresh bamboo. 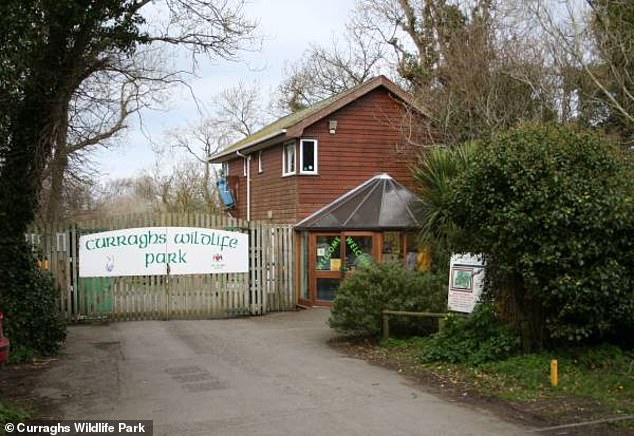 On his return to the park in Ballaugh, Isle of Man, Kush was treated to some ‘panda cake’ – a special mix made for the species from zoo food – as well as some fruit, sweet potato and fresh bamboo

‘The red pandas are all in our stud book, they’re endangered animals and important for the breeding program,’ Kathleen said.

‘Last year we had a red panda day and we gave £1,200 to the Red Panda Network to help with the conservation work out there. That money went specifically to plant a home for a project in Nepal where they’re making a corridor of forest to connect two panda habitats.

‘If Kush can use his celebrity status in any way, it would be good to highlight the plight of his wild pals that aren’t having such a good time!’

The park added that all of its staff would like to thank the people who helped retrieve him – including local residents, the police and off-duty contractors.

Kush is not the first animal to escape from The Curraghs; the north of the Isle of Man has a colony of at least 160 wild wallabies after a group of the marsupials made a bid for freedom around 40 years ago.

The island now has the largest wallaby population in the northern hemisphere. They are often spotted by local residents and are known to have caused at least one car accident, where a driver swerved to avoid one on the road and crashed into a wall, and a sea rescue after a wallaby was spotted struggling in the waves.