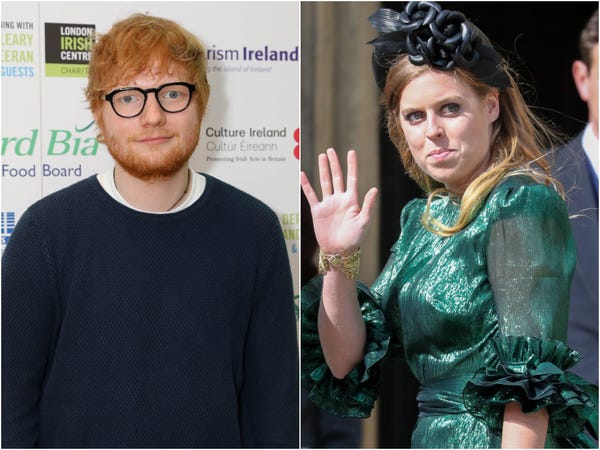 Ed Sheeran's manager Stuart Camp has spoken for the first time about when Princess Beatrice reportedly sliced the singer with a sword by accident at a party in 2016.

The Queen's granddaughter was jokingly attempting to "knight" British musician James Blunt when she swung the blade and accidentally struck Sheeran in the face, according to the Mail Online.

Sheeran was reportedly taken to hospital to receive treatment for the injury underneath his right eye before returning to the party at the Royal Lodge in Windsor, the publication reports.

"I got quite protective over that, because we've never publicly commented on it," Camp told The Telegraph of the incident in a new interview published this week, as cited by the Mail.

"But certain people said, 'Oh, you should lie and say it wasn't her and say it was someone else.' I said, 'Well, we're not telling anyone anything,'" he added.

Camp went on to call the princess a "f—— idiot," adding that he and Sheeran haven't been in touch with her since the incident.

"I'm not lying, just because someone's a f—— idiot. Because they're thinking, yeah, I will get paralytic and take a sword off the wall. You're just asking for trouble. You know, we've not heard hide nor hair from her since," he said.

Last year, the singer bonded with the Duke of Sussex over their red hair during a comedic video for World Mental Health Day.

"People just don't understand what it's like to be us," Sheeran told the prince in the video. "We are ginger, and we're gonna fight."

Buckingham Palace declined to comment when contacted by Insider for this article.