Federal election rules would be overhauled to limit early voting and require Australians to show photo ID before they cast their ballots under a plan that has been labelled an “outrage” that deprives people of their rights.

A key parliamentary committee revealed the proposal on Thursday in a report that also backed the idea of increasing the number of federal politicians because electorates had grown so large. 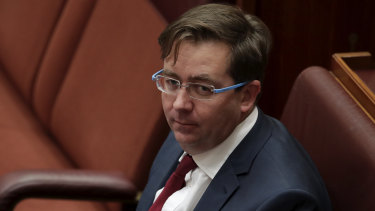 The findings, from a Coalition majority on the committee led by Liberal National Party senator James McGrath, included a divisive suggestion to drop compulsory preferential voting in favour of optional preferential voting.Credit:Alex Ellinghausen

One Labor member of the committee, Queensland MP Milton Dick, said the report should be rejected because it would undermine the country’s compulsory voting system.

"The report that the government members of [the joint standing committee on electoral matters] have produced from the committee’s inquiry into the 2019 federal election is an outrage," he said.

“Instead of proposing considered, sensible electoral reform, the government has used this as just another opportunity to silence its critics, suppress the vote and stop unions and grass-roots campaigners from participating in our democracy."

Labor's spokesman on electoral matters, South Australian senator Don Farrell, said the report was a "window on to a very dark future" under the Morrison government.

"Labor opposes these disgraceful plans to undermine the very principles of our Australian democratic system and has tabled a dissenting report proposing measures designed to continue our commitment to transparency and accountability," he said.

While the report was backed by the Coalition majority on the committee, it is not a statement from the federal government and is likely to be followed by months of debate before any official government response to its recommendations.

Finance Minister Simon Birmingham distanced the government from the proposals on Thursday night.

"Some of the recommendations are novel and have not been considered by the government before," he said.

"We will now take time to consider and respond to the report in due course."

The report has 27 recommendations on voting rules, electronic voting, campaign finance, the size of Parliament and four-year terms.

More than 4 million voters cast their ballots early at the last federal election, taking advantage of Australian Electoral Commission booths that opened three weeks before polling day on May 18.

In their majority report, Senator McGrath and his Coalition colleagues call for the early voting period to be cut to two weeks and for AEC officials to ensure voters meet legislated rules on voting early, rather than doing so merely because they want to.

In a sign of frustration over the time taken to count votes on election day, the report raised the idea of sorting the envelopes from 4pm so the count could begin at 6pm.

It also suggested the AEC prepare a timeline for the introduction of an electronic certified roll before the next federal election, and called for changes to the law so voters would have to show photo ID, such as a driver's licence or passport, to vote.

The report suggested the 151-member House of Representatives should be expanded as the population grew in each electorate, but did not make this as a firm recommendation.

"The committee recommends that the government consider asking the committee to inquire into the size of the House of Representatives, with consideration to the growing average size of electorates and growing demands of the electorate," it says.

In the same way, it asked the government to consider getting the committee to explore the need for non-fixed four-year terms.