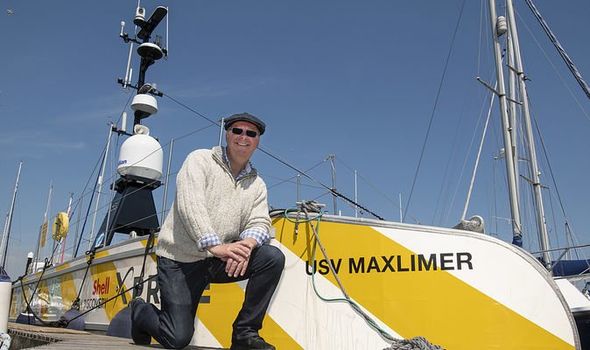 IT IS enough to break a salty seadog’s heart. There will be no shout of “land ahoy” or “aye, aye captain” on this modern-day Mary Celeste. The so-called robo-boat is a vessel controlled entirely by computers and the bridge is actually a small office on dry land. The £2million, 39-foot-long Sea-Kit merrily cruised around Tollesbury marina, near Maldon, Essex, without a soul on board and nobody at the helm – like a giant radio-controlled model boat.

And I joined the real “captain”, Ashley Skett, at the control centre as he skilfully manoeuvred Sea-Kit from the comfort of his office half a mile from her berth.

Neither he nor I could physically see the vessel, but with its eight cameras feeding live images through a satellite system, we knew precisely where she was and what she was doing every second.

“I can’t even smell the sea from here, never mind see it,” says Ashley, 35. “I am the master of the vessel and I have complete control of her movements and her functions.

“To the outsider it might look like I’m playing a video game but the reality is I am responsible for this unmanned vessel on the open seas so I have to pay attention to everything.

“I might be the captain from afar but I am still in control. When she is at sea somebody always has to be at the control centre to comply with maritime regulations.”

Last week Ashley and the team created seafaring history when they took a tray of oysters from Mersea Island, which lies off Tollesbury, loaded them on to Sea-Kit and sailed her to Ostend in Belgium.

Travelling at four knots it took her 18 hours to get there.Within minutes of docking the oysters were unloaded before 10 bottles of Belgian beer were put in the hold for the return trip. When the boat arrived safely back at her home berth, it wasn’t long before the beer was drunk in celebration of a global first.

No one has ever sent an uncrewed vessel loaded with cargo on such a long sea journey through busy shipping lanes. It may not have attracted as much publicity as the launch of the Titanic, but in global seafaring it was an historic moment.

And the fact that a British company has achieved the seemingly impossible has largely gone unnoticed. However, the trip proved that any ocean is Sea-Kit’s oyster now.

Ben Simpson, managing director of Sea-Kit International, says: “Taking the oysters to Belgium was an important trial, and a bit of fun, because it showed what she is capable of and she passed with flying colours.”

Sea-Kit has actually been designed for carrying out ocean surveys. With just seven per cent of the world’s seas properly mapped, there is a massive demand for finding a cheaper way of doing the work rather than relying on ocean survey vessels, which need large crews and are slow and expensive to run. Ben, who grew up in the Norfolk Broads, says: “There’s a huge environmental advantage to using an unmanned vessel for ocean surveys. Sea-Kit would use two tonnes of diesel compared to 300 tonnes for an ocean survey ship.

“She can send all the data back live through the satellite system so it can be assessed instantly by experts sitting in the comfort of an office. You also save a lot of money as you don’t need a crew.” As he shows me around his pride and joy, he speaks like someone who has just been given an Aston Martin for a weekend runabout.

“There is £300,000 worth of kit on that mast,” he says. “At the top is a thermal imaging camera, which is incredibly useful at night.

“There are eight CCTV cameras on board beaming back pictures to the control centre all the time and we are linked into three satellite systems.

“We can send this vessel to any ocean in the world and from our little office in Tollesbury we can work out where she is to the nearest 10 centimetres.

“Sea-Kit has a battery and diesel engine hybrid system which gives her an incredible range.

“To give you an idea, the trip to Belgium and back used up just two per cent of her fuel. She can travel 20,000 miles easily on one trip.” Standing on board it is an eerie experience: there is no wheel, no wood-panelled dashboard with controls and dials – the sort of maritime equipment you would expect to see on a vessel of this size.

All the gizmos and computers are below deck and locked away. Sea-Kit is sleek and rolls very gently, partly because of the 4.5 tonnes of batteries below.

The bow is very narrow, ideal for slicing through the waves, but she does not look like a typical boat, adding to the sense of being on an alien craft.

There are solar panels in the centre of the vessel, which makes the walking room even tighter.

However, you have to keep reminding yourself that she was specifically designed not to have a crew on board, so it is bound to feel awkward. 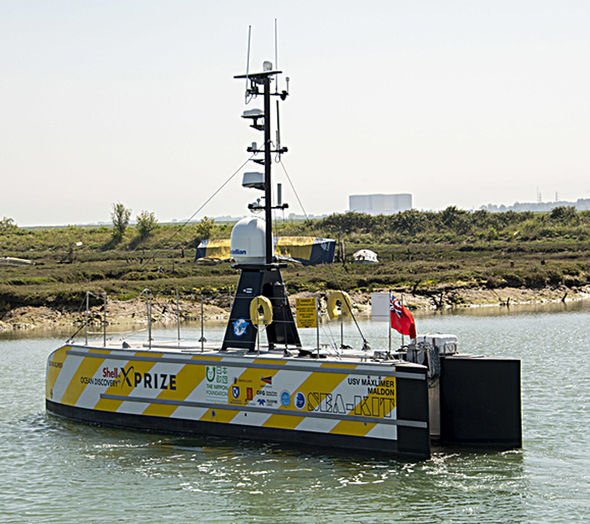 During rigorous tests Ben, a father of two who is in his early 40s, went 50 miles out to sea with a colleague on board but there was a support vessel nearby just in case of any problems.

“She feels very different to a normal boat, much narrower, but she is very stable and I felt very secure and safe on board,” he says.

“She is a bit like a floating buoy in that there is a lot of hull under the waterline which means she is less affected by the waves. Being on board out at sea is strangely tranquil.” Sea-Kit is designed to be able to turn turtle and right herself in huge seas – but with a superb weather monitoring system it is unlikely that will ever happen.

If she breaks communications with the control centre for longer than three minutes she automatically stops and holds her position with an electronic anchor.

The Ostend trip proved she can easily navigate around other shipping while maintaining her pre-ordained course.

Surveying aside, delivering cargo – with loads of up to 2.5 tons – is another role she can perform.

And she’s pretty much pirate-proof, which could make her a huge asset in the troubled waters off the east coast of Africa, for example.

Any illegal attempt to board would be spotted immediately by Sea-Kit’s monitoring system and the cargo locked down. 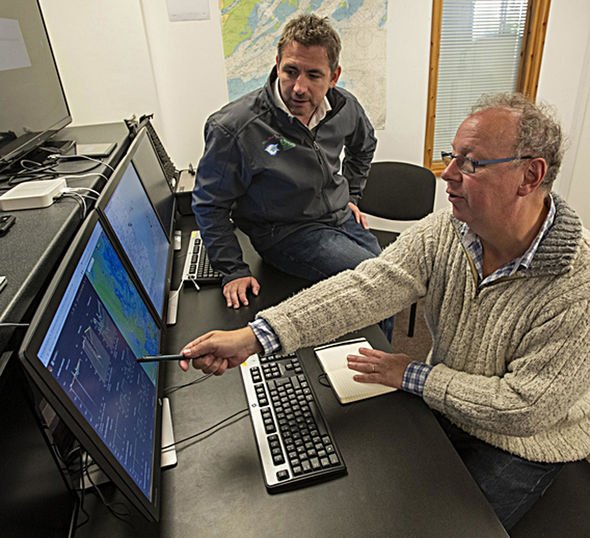 It would even be possible for the controller to deliver the pirates to the coastguard or naval forces, and warn the authorities, through hidden microphones, where the vessel was being taken.

Ben set up his company, Hushcraft, after taking a marine engineering course at Southampton University then working at sea for 10 years.

A Japanese philanthropic organisation, the Nippon Foundation, backed his dream of entering a global competition, called the X Prize, to design a vessel to advance the knowledge of the oceans and improve sea mapping.

The foundation has largely funded the £7million project, but it could get some of the money back if it triumphs in the contest.

The winner will be announced at the end of the month in Monaco and Sea-Kit is widely tipped to scoop the £4.5million prize for first place.

However, the vessel has already proved she has the X factor in trials, so captains across the world might have to get used to the idea of taking up the helm from the comfort of an office.