Dubai: Australian troops have been thanked for putting their lives at risk in evacuating 4000 refugees from Afghanistan during the fall of Kabul, as they told of their experience flying into the chaos as the Taliban took control of the capital.

Prime Minister Scott Morrison praised the Australian Defence Force personnel at their base in the Middle East, where they flew missions into Kabul when thousands of people sought to flee to the airport. 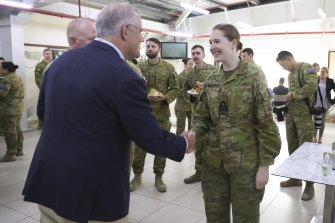 The airlift operations over nine days in late August evacuated 4100 people from Afghanistan, about four times the number the Australians first expected to save. Australian troops also helped US and other allied forces secure Kabul airport while the flights were getting out ahead of the Taliban’s deadline for exiting.

“In that moment, our defence forces, and all of those who served, were not found wanting,” Mr Morrison told the personnel.

“What we found is that you excelled. You exceeded the expectations.

“You continued to ensure that people are brought to safety and are making their way to Australia and their new home.

“There are thousands and thousands of Australians, now, who have been taken from Afghanistan to their new home in Australia, and the people they can thank most for that are the men and women who served in that operation and brought them to safety. And put themselves at great risk in that.”

While many more people were rescued than anticipated, there were hundreds of Australian visa holders remaining in Afghanistan.

Squadron Leader Dene La Pouple said he had never seen the chaos he witnessed when he flew transport aircraft into Kabul at night to evacuate people who fled across the tarmac toward his plane.

“You could see tracer fire coming up, things like that, lasers, flares going off as we were coming in,” he said.

“Once we landed at the airport we were fairly safe as we taxied in. 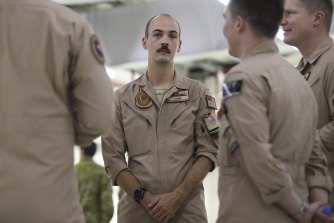 Squadron Leader Dene La Pouple said he had never seen such chaos as that around Kabul airport during the evacuation mission.Credit:Alex Ellinghausen

“I saw a number of families just fleeing for their lives, just carrying one bag, just the size of a backpack.”

But as a pilot, Squadron Leader La Pouple, who is based in Richmond in western Sydney, was separated from the refugees and did not get to speak to them.

“The hardest thing was that we still did not get everyone out and there were still people coming over the border,” he said.

“You can’t save everyone, as sad as that sounds, you can’t get everyone out. But to get the number that we did, we pushed really, really hard, for the timeframe and the window that we had.

“And what we got out was way more – it exceeded my expectations.”

Flight Lieutenant Danielle Tipping, from Adelaide, said the number evacuated ended up being thousands more than planned when the mission began.

“We weren’t even anticipating the amount that we got, and we just went back in and got more and more and more,” she said. 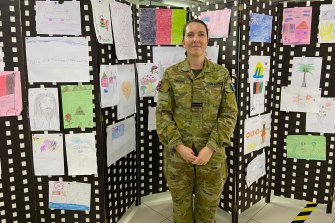 “We just rallied, we did what was required to support these people to make sure they had a safe space to be and a good start.