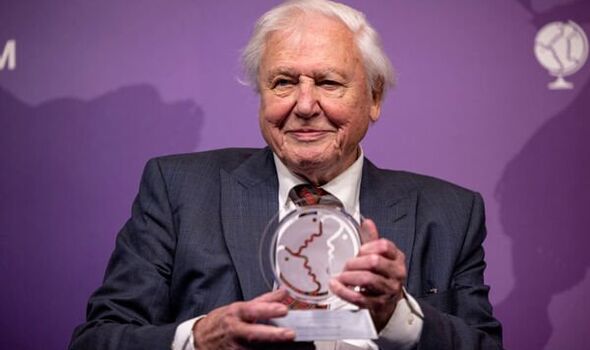 Dr George McGavin said that some species of beetles, bees, butterflies and other bugs are so close to extinction they can only be spotted in certain specific areas of the UK.

The entomologist, explorer and TV presenter, 68, has several species of insects named after him in honour of his discoveries.A remarkable career has seen him explore the tropical rainforests of Papua New Guinea, the caves of Thailand and the jungle in Belize.

He has now recorded an audiobook celebrating Britain’s rarest bugs. In All Creatures Small And Great he is joined by special guests including Sir David Attenborough, and actors Alison Steadman and Jane Horrocks.

Gavin And Stacey star Steadman, 75, is an ambassador for London Wildlife Trust, while Horrocks, 58, who portrayed Bubble in Absolutely Fabulous, is the co-host of a podcast about beekeeping, Queen Bees.

In the book Sir David says: “One of the great human gifts is curiosity, and the pleasure that comes from discovering things that aren’t necessarily obvious.”

Dr McGavin has listed 10 endangered bugs which he describes as “my favourite British sixlegged national treasures”.

Once common across the UK they are now clinging on in small pockets where their habitat has survived.

Dr McGavin says: “There are hundreds of insect species that can sadly no longer be found living in the UK. Many have vanished in the last 100 years.

“The reasons are not hard to find. The huge amounts of pesticides used in intensive agriculture have taken a heavy toll.

“At a time when we are losing biodiversity faster than ever before, I want to inspire love and curiosity about the insect world.

“It’s never been more vital to comprehend the giant impact of nature’s smallest creatures and understand why we depend on them for our very survival.

“Lose insects and you will lose the heart of the natural world.

All Creatures Small And Great, featuring Sir David Attenborough and other guests, is out now, WFH Original, £16.99

GREAT YELLOW BUMBLEBEE North Highlands/ Hebrides/Orkney Once widespread across the UK, this is now one of the rarest bees in the country

SHRILL CARDER BEE South Wales One of the smallest and rarest British bumblebees, its name comes from the high-pitched buzz made by the Queens HORNET ROBBER FLY South Devon This sit-and-wait predator is one of the largest flies in the country. It feeds on dung beetles, but will also eat bees and grasshoppers

NORTHERN DUNE TIGER BEETLE Merseyside One of the fastest predators on earth, three quarters of its population can be found among the Sefton sand dunes

STAG BEETLE Hampshire In decline across all of Europe due to loss of woodland, males use their huge jaws to display to females and fight off other males