A father brought back to life on the roadside when medics cut open his chest and squeezed his heart has relearned how to walk in time to accompany his daughter down the aisle.

Motorcyclist John O’Brien, 48, from Warrington, Cheshire, died on the tarmac when he collided with a car on a 50mph road – forcing emergency services to cut open his chest and massage his heart back to life.

The construction worker suffered a major cardiac arrest while paramedics tried to deal with his injuries including a shattered pelvis, fractured skull, broken back and wrist after the crash last October.

But father-of-one John – who was told by doctors no-one else in the world has ever survived the blunt trauma he suffered – defied all medical expectations, forcing his body to relearn how to walk in time to be able to accompany his daughter, Amy, 26, down the aisle earlier this month. 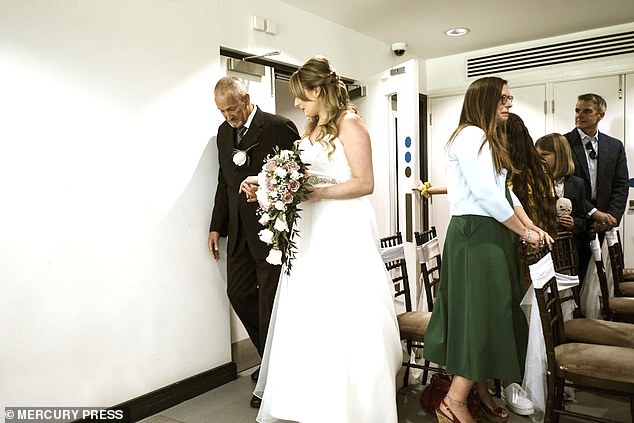 Father-of-one John O’Brien from Cheshire learned how to walk again unaided, in time to accompany his daughter, Amy, 26, down the aisle in May 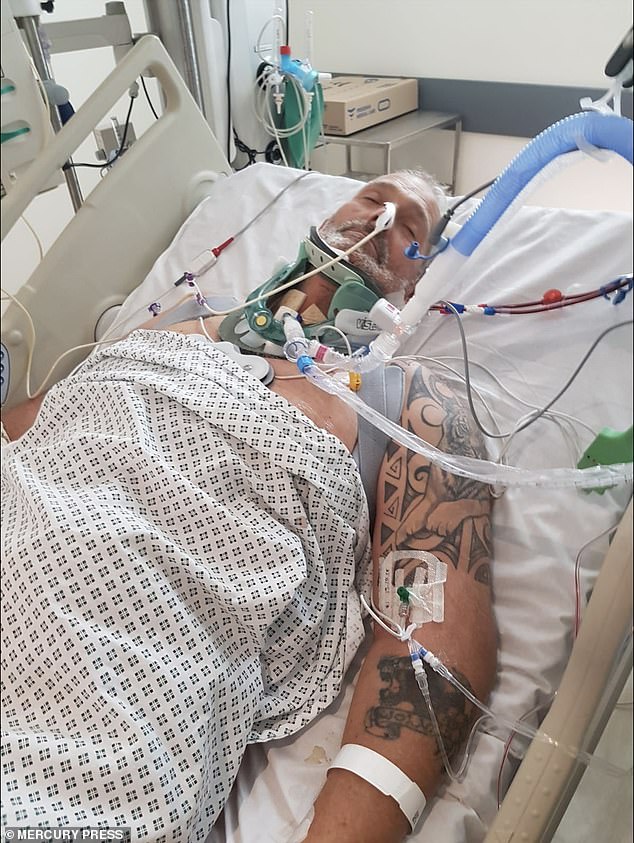 John was told by doctors that no-one else in the world has survived the blunt trauma he suffered, with surgeons forced to open his entire chest to save him

Biker of 20 years John, who will face two more operations in future, said: ‘Throughout my recovery, I just kept thinking about how I wanted to be able to walk with Amy unaided.

‘On the day of her wedding, I did it without my walking sticks and that was my goal all along.

John was delighted to walk his little girl down the aisle to meet future groom Jonny Evans, 26, IT Technician, at the wedding in Mesnes Park, Wigan, on May 11 – meaning there wasn’t a dry eye in the house for more reasons than one.

‘It was really emotional and it was absolutely mind blowing. I had to fight back the tears as soon as I saw her in her dress.’ 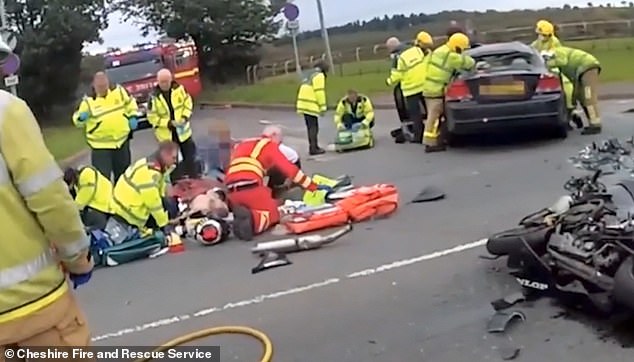 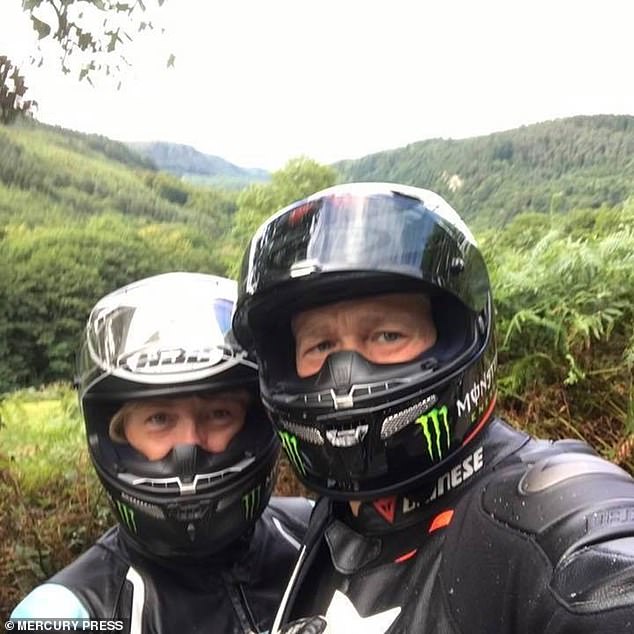 John and his partner Sandra, 52, were huge bike fans before he had his accident. He had to be brought back to life on the side of the road after hitting a car

He went on: ‘I think all my family were shocked that I managed to do it. They are amazed that I’m even here, they call me the walking miracle.

Amy revealed: ‘It was fantastic and highly emotional. He was determined to walk me down the aisle without his stick. He’s worked really hard to get to the point that he’s at now, it’s just been sheer determination and hard work.’

‘I was discharged from the trauma ward after three months and transferred to a rehabilitation unit where they kept telling me I would need to be for another four months.

‘I told them “not a chance” and was out of there in four weeks.’ 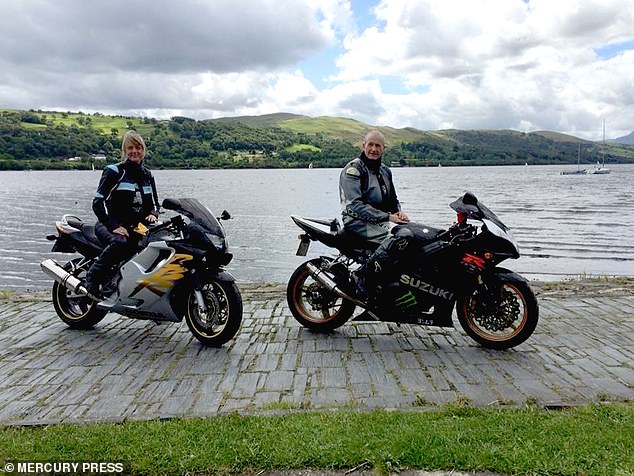 John had been riding motorcycles for twenty years before his accident in Cheshire. He’s now given up his bike 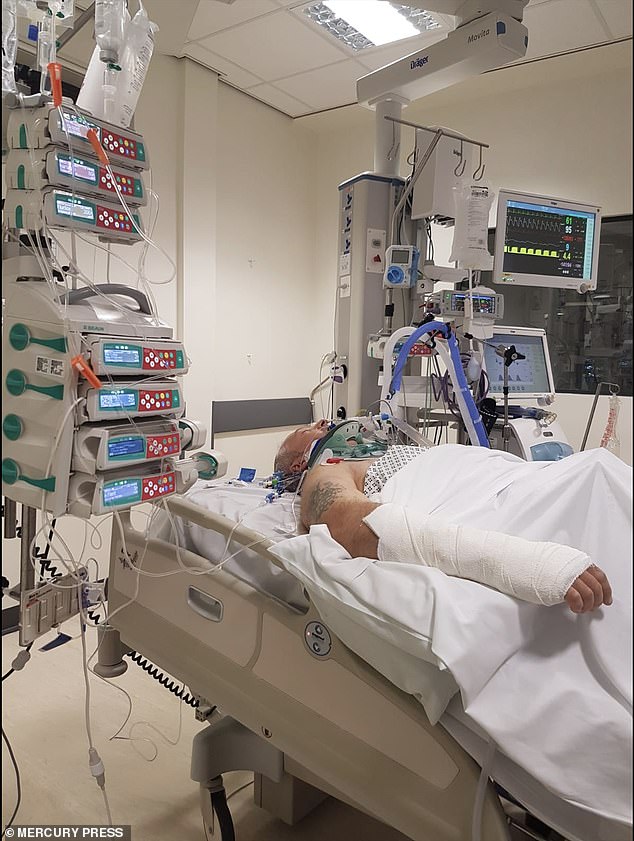 John was in an induced coma for two weeks after the accident at Aintree Hospital in Liverpool, with injuries including a shattered pelvis, fractured skull, broken wrist and back 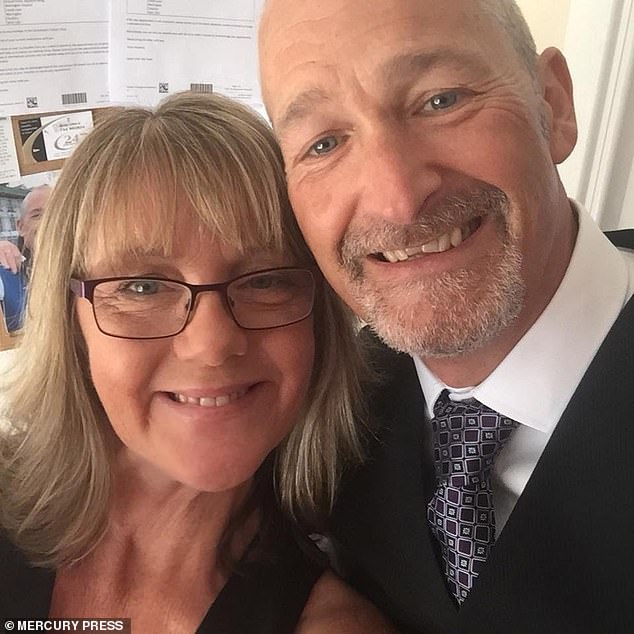 John, pictured here with his partner Sandra, was initially told he would be in rehabilitation for four months. He defied the odds and was discharged in just four weeks

He explained: ‘I’m quite a determined and stubborn person, I was adamant I was getting out of there, and another four months later I was walking Amy down the aisle.’

After the crash, John spent two weeks in an induced coma at Aintree Hospital in Liverpool, where he also fought off a bout of septicemia, before spending a further two and a half months on the hospital’s trauma ward.

Quite literally a medical miracle, John was told by doctors that no-one else in the world has survived the blunt trauma he suffered, with surgeons forced to perform a ‘clamshell thoracotomy’ opening up his entire chest, to save him. 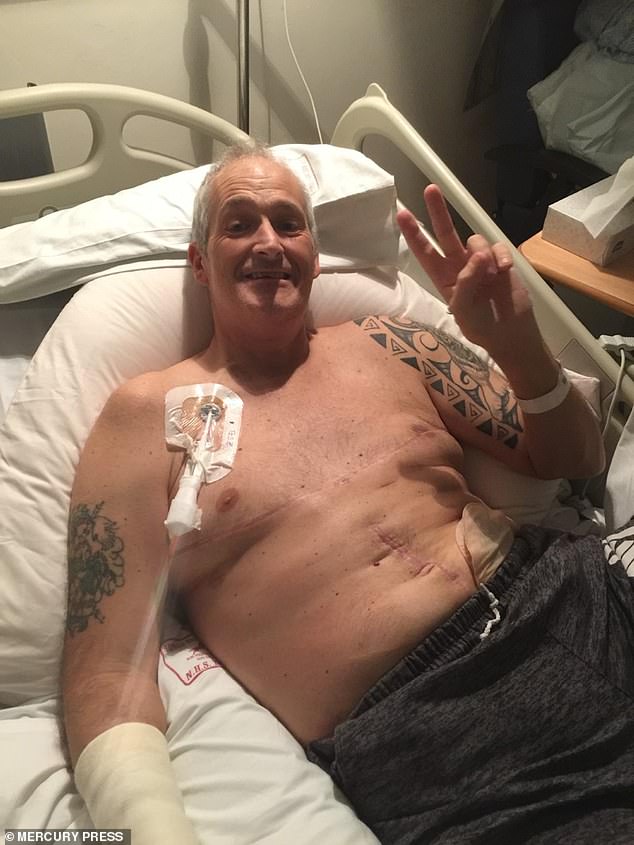 The father of one has been left with a huge 12 inch scar going from his sternum to his groin, and another across his chest 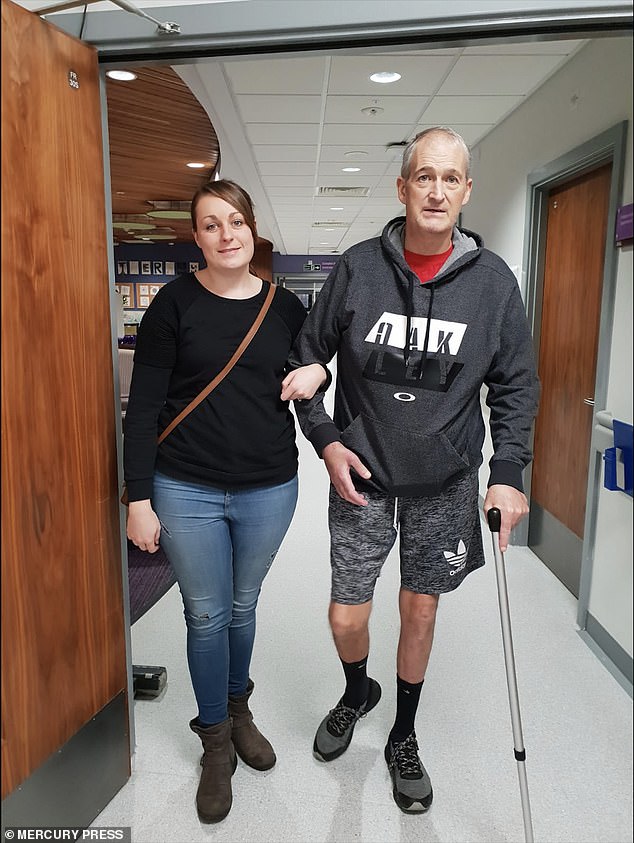 He was determined to walk his daughter down the aisle (pictured here, with Amy during rehabilitation) 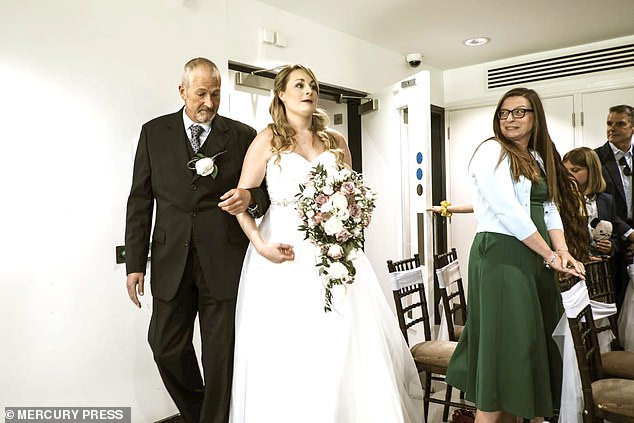 The life-saving operation has left him with two twelve inch scars across his chest and down to his groin, but John, who jokes that he looks like Frankenstein, said he feels amazing to be still be alive.

And incredibly, the surgery began when Dr Mark Forrest, medical lead at Cheshire Fire and Rescue, made the decision to cut John open and pump his heart back into a rhythm with his hands at the scene of the accident.

John, who has left his biking days with partner Sandra, 52, behind for good in the aftermath of the incident, added: ‘I can’t remember anything from the day of the incident, even the day before is hazy. 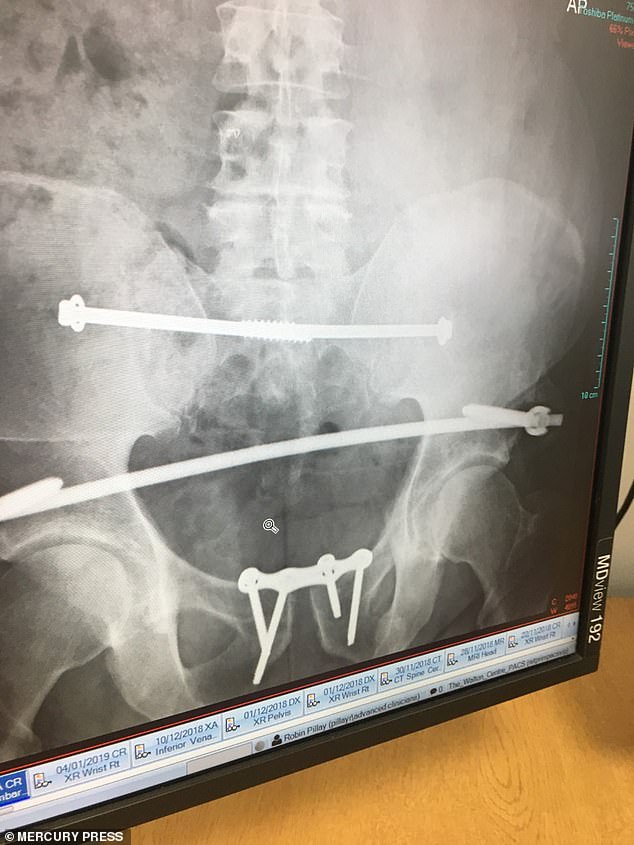 John shattered his pelvis in the crash, which is now being held together by metal pins. He will undergo another major surgery to remove these later this year 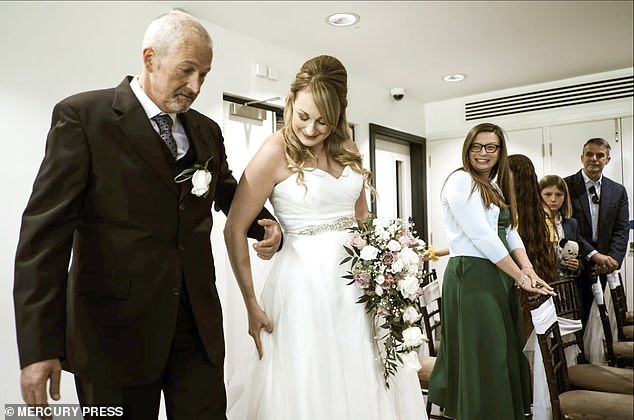 ‘But I understand from the medical reports and speaking to doctors that it was a last resort.

‘I’d had a major cardiac arrest as they were trying to get me into the air ambulance and so they got me back onto the road.’

He went on: ‘I was technically dead at the scene until Mark made the decision to cut me open.

‘I find it incredible. They told me they were rifling through my organs, having to move my lungs out the way to save me. It was astonishing to hear what they did.’ 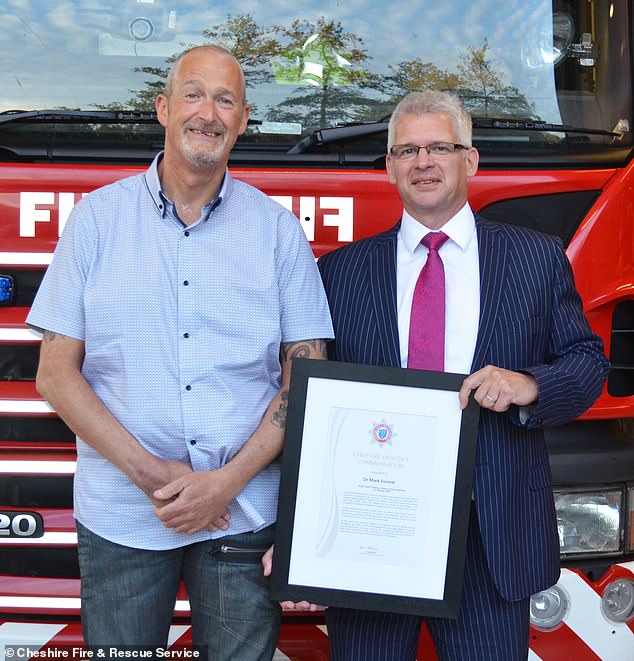 Earlier this month John met with surgeon Dr Mark Forrest, who opened up his chest to perform life-saving surgery after a road traffic accident

At an organised meet up by Cheshire Fire and Rescue earlier this month, John was able to meet Mark and the team who worked to save him on the day of the crash and thank them for giving him the chance to see his daughter get married.

He added: ‘It was absolutely amazing to meet Mark and all the people who helped save me, just to be able to thank them for what they’ve done was incredible.

‘I don’t just want to thank the emergency services though, I want to thank all the nurses and doctors who put up with me through my four months in hospital because I was a stubborn bugger and I didn’t make it easy for them at times!’