Team Alfie! Drew Barrymore interviewed the cast of Emily In Paris about their upcoming third season — and things turned hot and heavy between her and actor Lucien Laviscount.

Everything to Know About ‘Emily in Paris’ Season 3

After Barrymore, 47, asked Laviscount, 30, about how he got his start in acting on the Friday, December 16, episode of The Drew Barrymore Show, the England native quickly took the opportunity to throw a few flirty remarks her way.

“I’ll be your Darth Vader, by the way, whenever you need,” Laviscount said in the middle of his story, referencing Barrymore’s previous comment about the Star Wars villain being her “first crush.” After the Never Been Kissed star’s mouth dropped in surprise at his surprising remark, she joked that the show needed to take “a quick break.”

“Who’s your childhood fantasy, out of curiosity?” Barrymore asked, to which Laviscount quipped, “I’m living the dream right now.”

When Lily Collins suggested that the rest of the Emily In Paris cast should excuse themselves, the E.T. actress declared that this has “never happened” to her while fumbling over her words.

The California native attempted to regain control of the interview by asking how Laviscount was discovered by David Beckham’s agent in a department store, but the conversation quickly turned risqué again when the Snatch alum mentioned the retail company Marks and Spencer.

“Oh, I know Marks and Spencer. I’m actually wearing their underwear right now. I am not kidding,” Barrymore said with her head in her hands, to which Laviscount replied, “Can we really cut to that commercial break?” 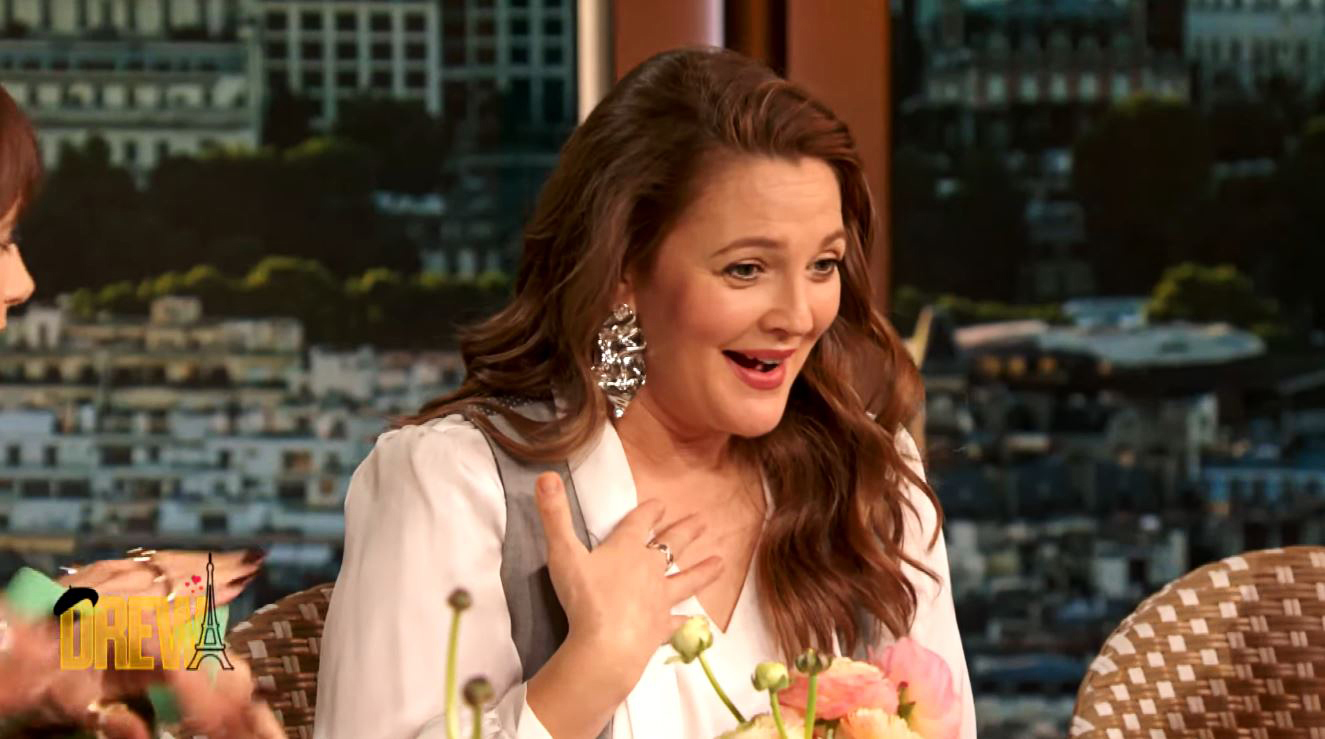 Barrymore’s real-life Josie Grossie moment comes just weeks after she announced that she was back on the dating scene after “so many years.”

During an episode of her talk show earlier this month, the Charlie’s Angels star asked guest Whoopi Goldberg if she was dating before admitting, “I am. Because it had been so many years, I started to get a little worried, like I’m too good at being alone.”

Barrymore has remained single, with the exception of a few “occasional” dates, since she split from ex-husband Will Kopelman in 2016. The pair, who were married for four years before calling it quits, share daughters Olive,10, and Frankie, 8.

“I’m not there yet,” she told Bobby Berk earlier this year. “I have two young girls and, like, I don’t want to bring people home. … I think it would take me a very long time to meet someone and get to know them before I could even ever introduce them to my daughters.”

Everything Drew Barrymore Has Said About Dating After Will Kopelman Split

In October, the Music & Lyrics star revealed that she had gone “years without sex” after her separation “made her cautious” about getting into another intimate relationship.

“I have had the pleasure of shifting my focus when it comes to love for myself and my two daughters,” she wrote in her personal blog. “I know that does not include a man nor has it for a while. I’ve come to realize through working in therapy, he said something and I had to write it down. He said, ‘Sex is not love! It is the expression of love.’ I have searched my whole life to have words like that to help me understand the difference and now, thanks to him, I do.”

Barrymore added that she needed to stay “very celibate” after ending her marriage with Kopelman, 44, to honor the “loss of a nuclear family that I swore I would have for my daughters.” She also shared she was “proud” of herself for how she went about her personal healing journey.

“I have just simply come to laugh about the fact that it is not my personal priority to be with a partner, but that doesn’t mean it won’t become one someday. I need time. And my view on sex has truly changed,” she wrote.