Great British Bake Off fans are left ‘crying with happiness’ as Henry wears a spider web brooch in tribute to former contestant Helena – and joke ‘the spooky lives on!’

Great British Bake Off fans were left ‘crying with happiness’ after Henry paid tribute to former contestant Helena by wearing a spider web brooch in tonight’s episode of the Channel 4 show.

Despite outshining the other bakers during the technical task with her impressive 18 beignets soufflés, ‘goth queen’ Helena, 40, was axed from the tent alongside Welsh mother Michelle, 35, in a shock double elimination last week.

And Durham University student Henry, 20, not only paid perfect homage to Helena,  but also wore a Welsh dragon pin in a nod to former contestant Michelle.

Viewers were quick to take to social media after noticing the adorable accessories in the opening scenes.

‘Love that Henry is repping Helena this week with the spider web brooch #HelenaDeservedBetter,’ wrote one, while another penned: ‘Henry my beautiful angel wearing the spiderweb brooch for Helena. I’m too emotionally drained for this.’ 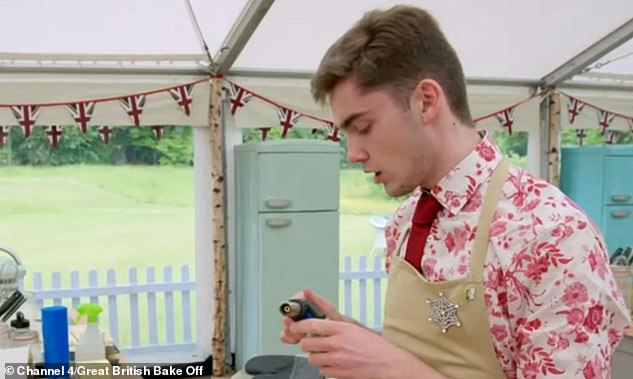 Viewers were left ‘crying with happiness’ after Henry, 20, (pictured) paid tribute to dumped contestant Helena by wearing a spider web brooch in tonight’s episode of Great British Bake Off 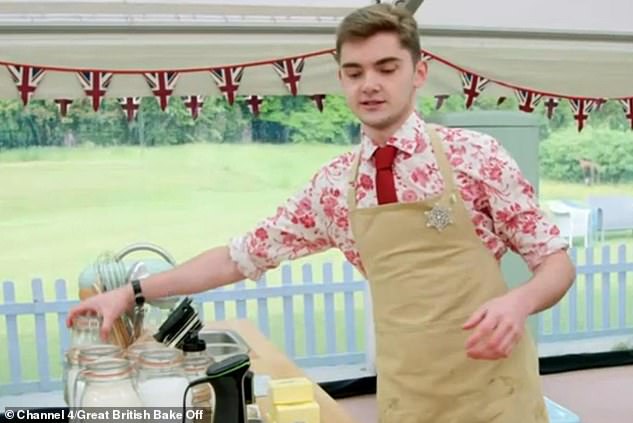 In a touching tribute, the Durham University student (pictured) donned a spider web brooch for Helena and also wore a welsh dragon pin in a nod to Michelle who also left the tent last week

A third added: ‘Oh my god I’ve just spotted Henry’s spider brooch in honour of Helena. She might have left the tent but in spirit she’s still there!’

A further viewer commented: ‘We’ve got a lot of love for Henry’s cobweb tribute to Helena. If she was still here, she would 100% be making a demonic meringue with haunted compote. We miss her. #GBBO’

Elsewhere in the episode, Paul told Steph her chocolate and coffee showstopper dessert was the ‘best thing he’d eaten in a while’ as she was awarded star baker for a record third week in a row.

But those who tuned in were shocked she didn’t get rewarded with the famous ‘Hollywood handshake’ judge Paul gives out for particularly stand-out performances.

Viewers took to Twitter to comment on Henry’s brooch, with one writing: ‘Love that Henry is repping Helena this week with the spider web brooch #HelenaDeservedBetter #GBBO’

‘There are no words for how much I want to eat Steph’s showstopper. Surely that deserved a handshake? #GBBO,’ wrote one viewer,’ while another penned:

‘Paul says Steph’s bombe is one of the best things he’s tasted in a long time… but doesn’t give her a handshake?!’

Even presenter Noel Fielding commented: ‘I thought you were going to give her a handshake,’ to which Paul replied: ‘It was perfection’.

The only person that has won star baker three weeks in a row before is builder Richard Burr, who was the runner up in series five.

However, dessert week saw marketing consultant Priya, 34, leave the tent after she failed to impress judges with wonky jelly and bad timing on her desserts.

In a teary piece to camera and the end of the episode, she said: ‘Of course I’m going to cry! It’s felt like such a privilege, if you just start with things you really enjoy – you can’t go wrong’. 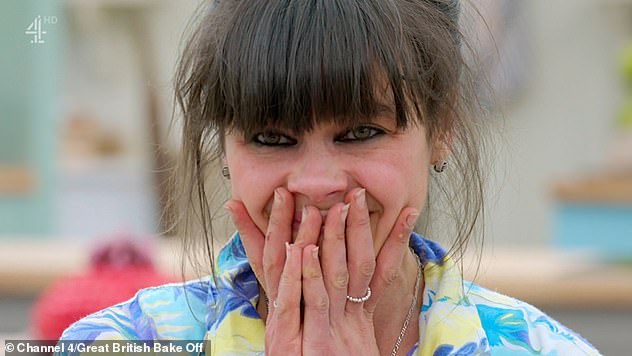 Steph beamed with joy as she won star baker (pictured). The only other person who has won star baker three weeks in a row before is builder Richard Burr, who was the runner up in series five

Elsewhere in the episode, viewers were shocked when Steph didn’t get rewarded with the famous ‘Hollywood handshake’ (pictured)