An overhaul to the way students are taught grammar, punctuation and sentence structure is coming after a decade-long decline in writing standards that has left teenagers without vital literacy skills.

The changes to the NSW English syllabus for years 3 to 10 will be released on Monday, and grammar will become a core focus to help students express complex ideas, write clear sentences and lift academic results. 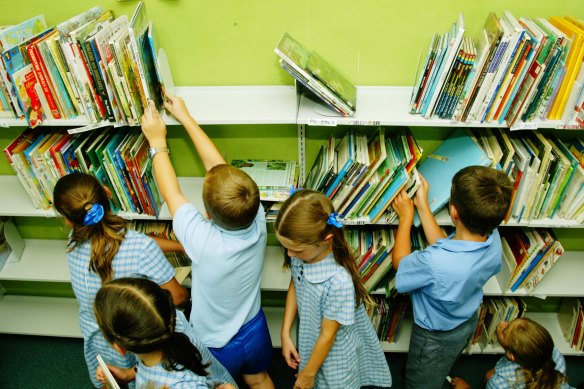 The new English syllabus for primary and high school students builds on the reformed kindergarten to year 2 syllabus.Credit:Lee Besford

NSW Premier Dominic Perrottet said: “If our NAPLAN results have shown us anything, it’s that we need to focus on the explicit teaching of grammar, sentence structure and punctuation in high school. Focusing on those foundational skills is key to success.”

This year’s NAPLAN results revealed teenage boys’ literacy had fallen to record lows: about one in six failed to reach the minimum standard in grammar and punctuation and about 12 per cent struggled to read at a basic level.

A new maths syllabus for years 3 to 10 will also be released, with more sequencing and reasoning skills and a core subjects structure in years 7 to 10 to prepare students for calculus-based courses and mandatory HSC maths.

Perrottet said the new English and maths syllabuses were significant milestones in the state’s curriculum reform.

“It is vital that NSW students are developing strong skills in both literacy and numeracy so they can succeed in school and beyond,” he said.

In 2020, a NSW Education Standards Authority (NESA) review found writing had been widely neglected in the state’s high schools.

Education Minister Sarah Mitchell said the new English syllabus would build on the reforms for kindergarten to year 2 where a focus in “those early years on phonics is a game-changer that is already seeing results”.

It will mean teachers must ensure students in years 3 and 4 can read fluently and decipher new words quickly. “For students in years 7 to 10, they will be taught ways to interpret unfamiliar words and use grammar to express complex ideas,” Mitchell said.

Peter Knapp, an education consultant who has a doctorate in the teaching of writing, said the changes represented a major departure from the existing English syllabus.

“If you look at the current year 7 to 10 syllabuses, the teaching of grammar is assumed to have happened in primary,” he said. “These changes mean there is greater continuity between primary and secondary years and grammar is now a study in its own right.”

Knapp said that while simple sentences and basic syntax were taught systematically in kindergarten to year 2, that approach did not flow through to the upper primary years, leaving students starting high school unable to deal with the more complex literacy requirements of the curriculum.

“You would have to go back to the 1960s to find syllabus documents where grammar was taught in a prescriptive way,” he said. “But there was a reaction against the prescriptiveness of the old syllabus, so that grammar was seen to be almost anti-English. This new syllabus strikes a good middle ground, giving teachers direction and structure.

”NAPLAN data show students can’t write effective sentences. Teachers are also not being trained to teach the complexities of high school writing,” Knapp said, adding that universities would need to address their teacher training courses to produce graduates who are competent in teaching writing.

NAPLAN results show girls outperform boys in writing and reading. The gender gap is especially stark in writing: 81.6 per cent of boys reach the minimum standard, compared with 90.8 per cent of girls.

A 2020 survey commissioned by NESA found two in five high school English teachers said they were poorly trained to teach writing and many were not prepared at all to teach grammar, punctuation, spelling and how to use paragraphs.

An English teacher at Cumberland High School, Kari Isachsen, said one major shift in the syllabus was having four key types of text instead of five across the school year. 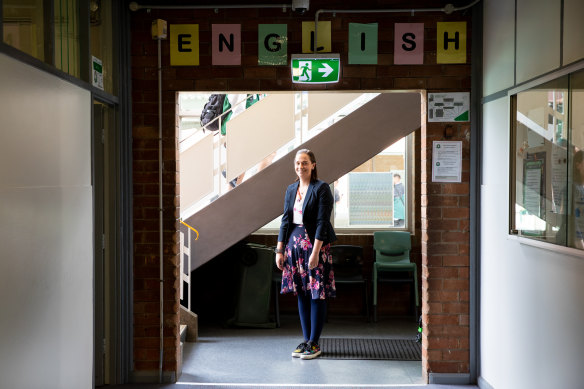 “When we had five, teachers often couldn’t go into as much depth as they might like. The new syllabus has extended prose, poetry, film, and drama. Shakespeare will be mandatory in years 9 and 10, and more texts by Aboriginal and Torres Strait Islander authors have been prioritised,” she said.

“There is also an emphasis on reading for enjoyment. At parent-teacher night, the main question I get is, ‘How do I improve my child’s writing?’. To improve writing, we need to get students reading more and widely.”

For maths, changes include stronger foundations in sequencing and reasoning, and primary students will develop a deeper understanding of maths concepts to master important skills before moving on to another concept.

Mitchell said: “In other words, students will need to not only know Pythagoras’ theorem; they will need to be able to explain how it works in practice and why.”

The new syllabuses will be available for teachers to plan and prepare during 2023 and will be taught in all NSW schools from 2024.

HSC maths will be compulsory from 2025 and examined from 2026. A new flexible core-paths structure will replace the three-tiered approach to maths in years 9 and 10 to better prepare students for years 11 and 12.