Embattled senior Liberal MP Tim Smith will consider his political future over the next 24 hours amid growing internal pressure for him to resign from state Parliament after he was caught driving while more than two times over the legal alcohol limit.

Opposition Leader Matthew Guy said he was “extremely angry and disappointed” with his most loyal ally, but that he would wait to speak with Mr Smith face-to-face before commenting on whether the Kew MP should step down from politics. 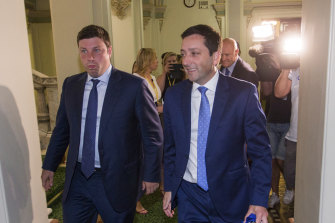 “I am bitterly disappointed that any member of Parliament, let alone one of my colleagues, would get behind the wheel after drinking, let alone recording blood alcohol content that he did,” Mr Guy said on Monday afternoon.

“I will, as I have in other circumstances of members of Parliament and people in my team where there are issues like this to discuss, I will speak to him face-to-face within the next 24 hours or so to discuss his future with him.”

Mr Smith crashed his car into a parked vehicle before ploughing into the wall of a Hawthorn home on Saturday night following a dinner with friends. He recorded a blood-alcohol reading of 0.131 – more than two times the legal limit.

The plaster on the inside wall of the home – the bedroom of an 8-year-old child – had cracked where the car made impact. Mr Smith had his licence automatically suspended for 12 months.

Federal Treasurer Josh Frydenberg, a close confidant of Mr Smith, told ABC News Breakfast on Monday morning the former shadow attorney general had made the right decision in resigning from the frontbench, and “no doubt he will consider his own future”.

“Tim has still got a lot of work to do to represent his own community, even though he’s not in shadow cabinet. But those deliberations and those decisions are matters for him,” Mr Frydenberg said.

“Actions like this, do have consequences. And in his own political career, it’s seen him resign his position straight away from the shadow cabinet. And that was the right thing to do.

“No-one is condoning that conduct. It’s completely unacceptable and it’s dangerous, and he’s made a strong statement to that effect. But as for his future, no doubt he will take some time to reflect on that.”

Mr Smith is not in Melbourne, but is expected to front the public “within days”.

In a statement on Sunday afternoon, in which he made no mention of the car crash, Mr Smith said: “After dinner with friends, I believed I was under the legal limit to drive home. This was not the case.

“I apologise to my constituents, my colleagues, my family and the people of Victoria who expect their elected representatives to uphold the highest standards of behaviour.”