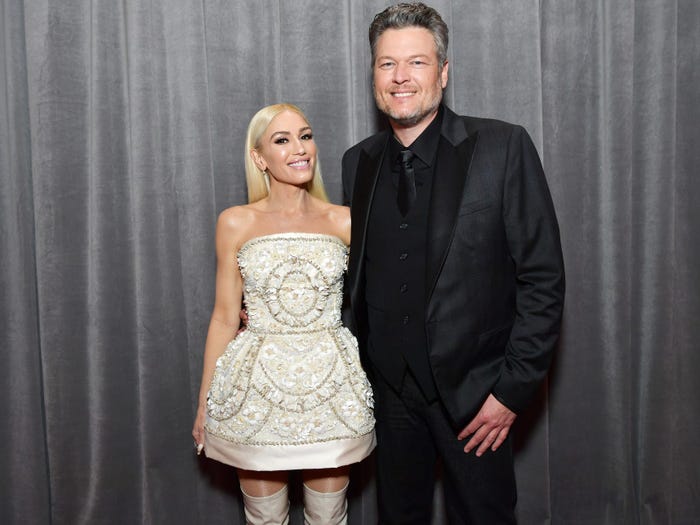 Blake Shelton proposed to Gwen Stefani in late October — and the latter musician is finally showing off her engagement ring that could have cost $500,000.

On Sunday, the couple attended the People's Choice Awards at The Barker Hangar in Santa Monica, California. Because the event was filmed with social-distancing measures in place, Stefani had to wait in the car while Shelton accepted the award for country artist of 2020.

Stefani posted numerous videos to her Instagram story to pass the time, and she showed off her massive ring in one where she talked to Shelton about the Arizona Cardinals winning a game.

Speaking to Insider over email, Ajay Anand, the founder and CEO of the diamond search engine Rare Carat, said Stefani's diamonds make for "a 'Rich Girl' ring" — a play on her 2004 hit single.

"We're looking at a gorgeous eight-carat, radiant-shape diamond with trapezoid sides — an Art Deco look," he said. "We're talking $500,000 in all, as the center stone is an icy white D-to-F color diamond."

Diamonds that land between D and F on the color scale, according to Rare Carat, are colorless and more expensive than stones that rank lower.

Stefani previously showed off her ring with an Instagram post, in which she announced that she and Shelton are engaged by writing: "@blakeshelton yes please! 💍🙏🏻 gx." She also included a photo of herself and Shelton kissing as she held up her left hand.

Shelton posted the same photo on his Instagram page and wrote: "Hey @gwenstefani thanks for saving my 2020… And the rest of my life.. I love you. I heard a YES!"

The couple first met on the NBC competition show "The Voice," and began dating one year later in 2015 shortly after they both went through divorces.