Australians stranded overseas face a tougher battle to get home as governments try to get ahead of a highly infectious strain of COVID-19, but authorities have held back from a total ban on international flights.

Brisbane has gone into a three-day lockdown and made masks mandatory as the Queensland government moves quickly to stop community spread of a virulent strain contracted by a cleaner in on of the city's quarantine hotels. The mutant strain is 70 per cent more transmissible than previous strains of the coronavirus and has taken hold in the UK. 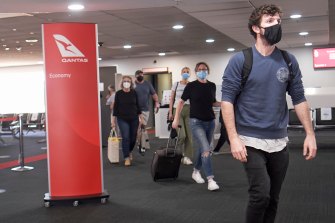 Masks are now mandatory on all international and domestic flights as governments battle to stop a highly infectious strain of coronavirus from taking hold in Australia.Credit:Luis Enrique Ascui

The other states and the Commonwealth have declared Brisbane a hotspot and restricted travel from the city. People who were in Brisbane any time after January 2 have been urged to get tested and isolate themselves.

National cabinet has also agreed to require anyone flying to Australia to return a negative COVID-19 test before they board their plane, and mandated mask wearing on domestic and international flights and in all airports. All flight crew will be tested on arrival to Australia and quarantine workers, including drivers, cleaners and medical staff, will have to be tested daily.

It has also halved the cap on international arrivals in NSW, Western Australia and Queensland until February 15 to reduce the risk and load on quarantine. Repatriation flights taking people to Howard Springs near Darwin will continue as planned.

Health officials considered banning all flights into Australia but rejected the plan on the basis the country needed air freight and to bring in critical supplies and skilled workers to keep functioning. The new virus strains are in several countries besides the UK, including South Africa and, experts believe, the United States.

"The idea that it somehow can be contained just out of the United Kingdom is a false hope," Prime Minister Scott Morrison said. "It would mean not just [closing to] one country – it'd mean the whole world. And that would have very profound economic implications for Australia."

Chief Medical Officer Paul Kelly said moving "hard and fast and strong" was the best way to prevent the more infectious strain from becoming the dominant one circulating in Australia, because it would be much more difficult to control.

"All of the things we've done in the past, all of those controls we've talked about in terms of test, trace, isolate … will become less effective if this [strain of the] virus was to establish itself in Australia," he said.

There are about 38,000 Australians overseas registered as wanting to return home, with the largest cohorts in India and the UK. These are now predominantly people who have been living and working overseas, rather than tourists, according to a government source involved with repatriation efforts.

More than 400,000 Australians have returned since the pandemic started, including 63,100 who arrived since September when Mr Morrison said every effort would be made to return people by Christmas.

"It was all there in black and white in October last year – test passengers before they get on flights, open federally-run quarantine centres, improve quarantine safety – but Scott Morrison ignored all that advice, and now it is his fault that more Australians cannot get home," she said.

Hardship grants will continue to be available to Australians overseas who are in financially precarious situations, including if they need to pay for pre-flight coronavirus tests.

Professor Kelly said he had argued against requiring the tests previously out of equity concerns but now believed that although "it's not foolproof", it added another useful ring of containment.

Besides Queensland, travellers in quarantine in Sydney, Melbourne, South Australia and WA have tested positive to either the UK or South African variants.

Mr Morrison urged everyone currently in Brisbane to stay there, even if they were from another state. However, major motorways out of the city were gridlocked on Friday as people fled ahead of the lockdown.

Airlines and airports have welcomed the move to require masks for people flying into and around the country. Virgin Australia and Qantas have been providing customers with masks and hygiene kits, although the Australian Airports Association has urged people to come prepared with their own mask.

"Wearing a mask for the traveller’s own safety and the safety of others, should become second nature," AAA chief executive James Goodwin said. "It is also important that aviation workers are prioritised in the initial rollout of Australia’s vaccination program given their exposure to potentially infected international travellers."