Grants Pass, Oregon — Oregon health workers who got stuck in a snowstorm on their way back from a COVID-19 vaccination event went car to car injecting stranded drivers before several of the doses expired. Josephine County Public Health said on Facebook that the “impromptu vaccine clinic” took place after about 20 employees were stopped in traffic on a highway after a vaccination clinic Tuesday.

CBS Medford, Oregon affiliate KTVL-TV reported that they were stuck near Hayes Hill while en route to Grants Pass after staffing a vaccine clinic at Illinois Valley High School.

Six of the doses were earmarked for people in Grants Pass but “the snow meant those doses wouldn’t make it to them before they expired,” the health department said in a Facebook Post. 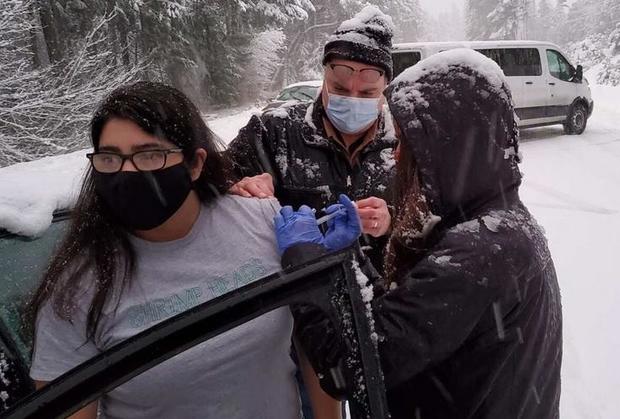 KTVL explained that the doses would have expired six hours after they were opened.

Not wanting to waste them, staff walked from vehicle to vehicle, offering people a chance to receive the vaccine. A county ambulance was on hand for safety.

All the doses were administered, including one to a Josephine County Sheriff’s Office employee who had arrived too late for the vaccination clinic but ended up stopped with the others, officials said.

Josephine County Public Health Director Mike Weber said it was one of the “coolest operations he’d been a part of.”