He's only appeared in two films so far, but already Baykali Ganambarr has shown enough to suggest he could become the David Gulpilil of his generation.

"He has a tremendous presence, both on screen and in person, but at the same time he's a very relaxed and fun-loving bloke," says Roderick MacKay, the writer-director of The Furnace, a colonial-era Western set in the outback of Western Australia in which Ganambarr makes the most of his limited screen time.

Like Gulpilil, Ganambarr was a dancer before he became an actor. He has spent the best part of eight years as a member of Djuki Mala – aka the Chookie Dancers – and an easy, loose-limbed physicality is central to his screen persona. 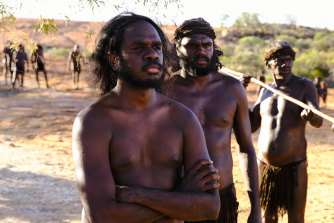 Baykali is a Yolngu man, born in Alice Springs but raised from the age of six on Elcho Island. "My father's a saltwater man, and I love being by the ocean," he says from Darwin, where he's in the process of relocating. "But I still definitely feel I'm a desert man too."

He owes his start, though, to the uncle who tagged him in a Facebook post inviting Aboriginal actors, "with or without experience", to audition for a role in Jennifer Kent's historical drama The Nightingale. He gave it a shot, and got the call back for a second audition (via video) while he was on a month-long season at the Edinburgh Fringe Festival with Djuki Mala. "As soon as I landed in Sydney I got a message on my phone saying 'you've got the role'. I was so stoked."

It was the beginning of an incredible journey that took him to Venice for the film's 2018 premiere. Even better, he won the festival's best young actor award.

"Getting all this attention, the media saying I was really good – not to be a big head or anything – it made me realise I might as well pursue an acting career," he says.

As with The Nightingale, The Furnace is a fictional tale that draws heavily upon a little-acknowledged aspect of our history – in this case, the role of Afghani Muslims, and Sikhs and Hindus from India, in opening up the trade routes for colonists in the Outback, and of their interactions with the Indigenous population.

"These films are eye-openers, definitely not sugar-coating, they're telling the truth, the hidden history, for all Australians," Ganambarr says. "It is our story and we have to tell it as it is for the rest of the world. I'm just so glad to be able to do films like this, and to speak languages that haven't been spoken on the big screen. For me to be able to do that is such an amazing privilege." 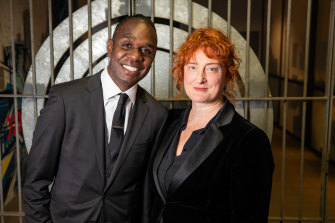 Baykali Ganambarr with director Jennifer Kent at the Australian premiere of The Nightingale in October 2018.Credit:James Elsby

The language in The Furnace is Badimaya, the native tongue of the Mount Magnet region where the story is set, and there was at the time the movie was being made just one native speaker left.

"He was so excited to be able to see this film but he passed on before it was finished," says Ganambarr, who learnt to speak it specifically for the film. "When I was watching the movie, and me speaking Badimaya, I thought of that old fella. It was for him, more or less."

With three roles lined up for next year, including one in which he will portray Warumpi Band frontman George Rrurrambu, Ganambarr is on his way to emulating Gulpilil, a man he has "always looked up to".

He's aware too that if his career does take flight it will come with a responsibility that few white actors would ever have to shoulder. 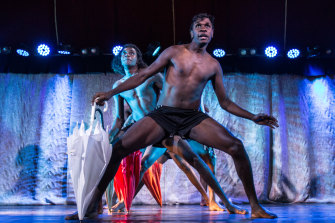 At front, with Djuki Mala in 2016.Credit:Cole Bennetts

"I know I'm representing all blackfella around Australia, their language, their culture," he says. "It makes me feel I'm carrying a lot of weight – but it's very much a good thing because not many blackfellas have that opportunity to take their stories overseas.

"When I was in LA and New York promoting The Nightingale people were saying, 'we didn't know Australia had native people'. Films like these definitely show there are still people here, blackfellas here, that belong. For me to be able to go out and show the rest of the world that we still exist, we're not gone, we're alive and we're strong is amazing. It makes me feel really proud."

The Furnace is in cinemas now.