Twitter users are cheering on an Illinois high school graduate’s next step.

Kurt Kinley, 20, recently learned of his acceptance into the Heartland Academy for Learning Opportunities (HALO) at Heartland Community College, and his priceless reaction was captured on camera.

More than 210,900 people have seen Kurt not only celebrate but also become overcome with emotion while he read his letter next to his father, sister and mother – courtesy of the video shared by his brother Glenn Kinley.

“Got a call from my little brother recently. I could tell he was fighting back tears when I answered. ‘Glenn, I’m going to college,’” Glenn’s viral Twitter post reads, which has received thousands of likes and retweets. “He just found out he got accepted into a community college program for students with special needs. Here’s the moment he found out.”

Kurt, who has Down syndrome, graduated from Normal West High School located in Normal, Illinois, in May 2020 but had to postpone his schooling due to the coronavirus pandemic, his mother Michele Kinley told FOX News in a phone interview.

Rather than diving into remote learning, which would offer fewer social and work opportunities, Kurt has been able to develop his skills at a local bakery and trampoline park in the last seven months.

Kurt never gave up on his dream of going to college like his older siblings and went through an application and interview process for Heartland’s HALO program, a higher education curriculum for students between the ages of 18 and 28.

“I felt like Kurt was a very true representation of himself during the interview,” Michele said while noting that she wasn’t sure what the letter was going to say when she grabbed her phone to record Kurt’s reaction.

“You could see he was obviously emotional, but he was certainly excited,” Michele continued. “He wears his heart on his sleeve, but our hope in this going viral is that people realize that there are so many opportunities out there for adults with special needs. And that we had so much help along the way, you know, [from] family and friends and teachers and paraprofessionals and classmates.”

With the HALO program, Kurt will take two classes per semester for two years. The classes can range between reading, money management, cooking, math and other important life skills that help develop students’ independence. 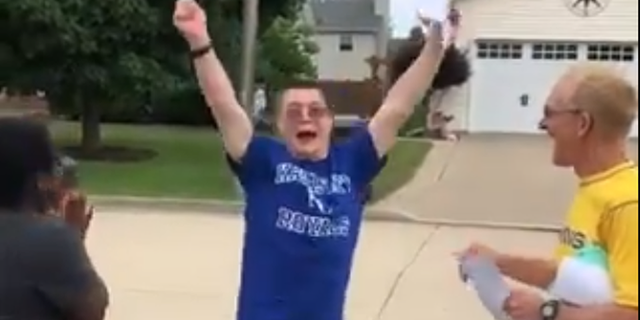 Hundreds of thousands of Twitter users are cheering on Kurt Kinley, an Illinois high school graduate who has recently been accepted into the Heartland Academy for Learning Opportunities (HALO) at Heartland Community College. Kinley’s reaction to his acceptance letter was captured on video and has gone viral online.
(Michele Kinley)

From the viral Twitter post, Kurt’s brother Glenn has seen firsthand that the video has touched hearts.

“It’s been just really cool to see the joy that it brought,” Glenn told FOX News. “I think for a lot of people too, it reminded them of some things that they take for granted.”

Since sharing the snippet, Glenn has received messages from parents who say they feel inspired that their children “would be able to go to college someday” after seeing Kurt’s video.

Michele said she credits Kurt’s success to the “inclusive environment” he experienced through the Gen Ed program he was enrolled in.

“We kind of fought hard for that,” Michele said. “Being social is just so important to him. This is going to be great for him, to be able to be with his peers, especially after COVID, there was so much time where, we were just home as a family, which was great …but he misses his friends a lot so this will be a nice way for him to get back into that.”