Enough to leave you in tiers! Hilarious snaps reveal failed wedding cakes that were not the icing on the big day

Cutting the cake is an integral part of any wedding celebrations, with most couples eager to showcase their chosen confection – whether it’s a classic iced affair or something a little more quirky.

However, some brides and grooms may well have been eager to throw tradition out the window and skip the big moment altogether after being presented with rather disastrous bakes.

Bored Panda has gathered a selection of hilarious wedding cake fails shared online by people from around the world that were certainly not a much-admired feature of the big day.

One couple who asked for a seaside castle for their cake ended up with a wobbly structure with phallic overtones, while the icing on another bake read: ‘Congratulations on your weeding.’

A bride was no doubt disappointed when the cake toppers aged both her and the groom by several decades, while

Enough to leave you in tiers! The baker got things very wrong when putting the elements of this iced confection together 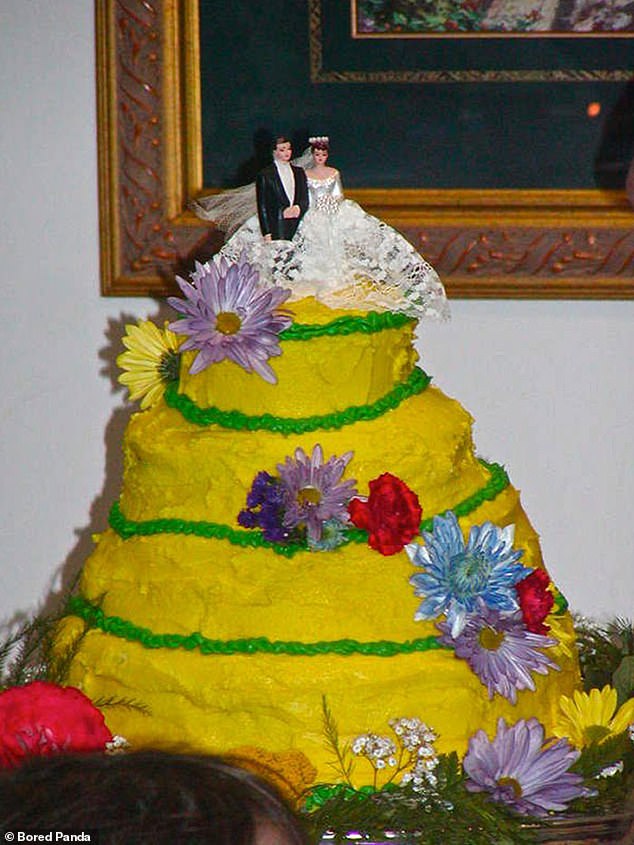 Cutting the mustard! The bride and groom appeared to be standing on a mound of yellow sludge in this unappetising creation 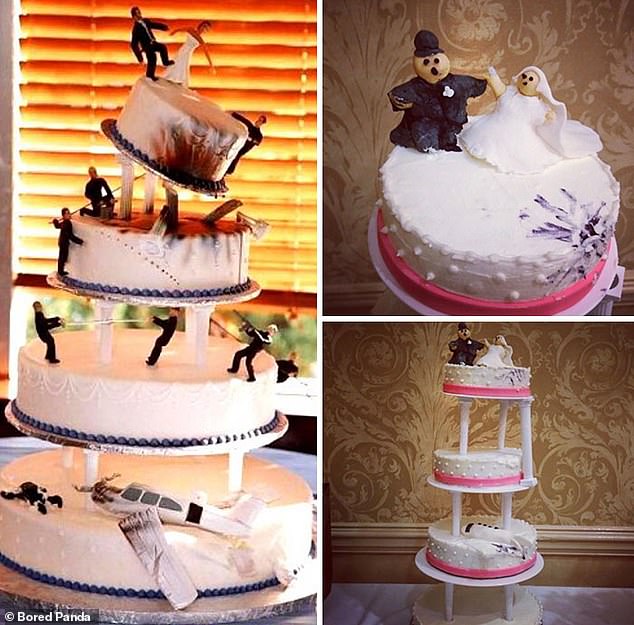 Who says romance is dead? These wedding cakes depicting shootings, peril and plane crashes were not the most moving choice for a celebration of love 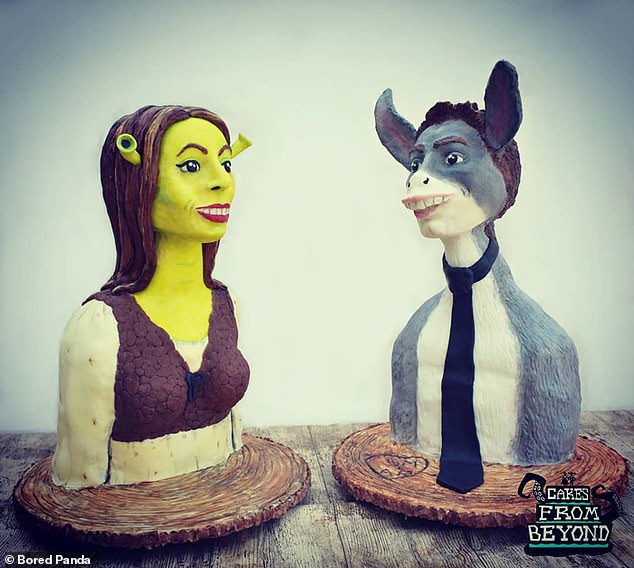 Uglier than Shrek! These sponge interpretations of Princess Fiona and The Donkey from the much-loved film left a lot to be desired 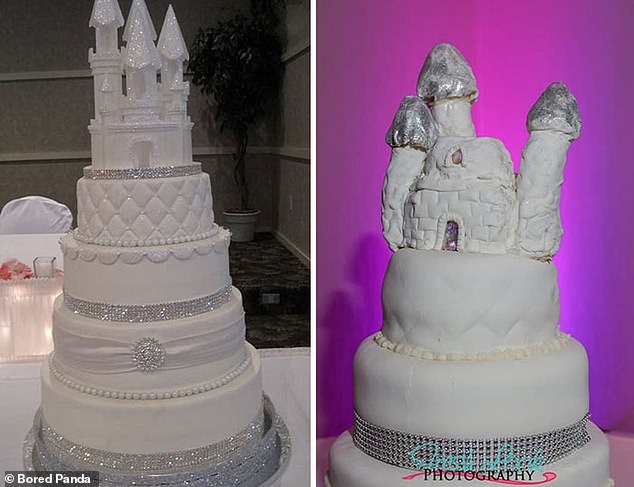 A royal fail! A bride who wanted a glittering princess casyle on top of iced tiers got an abominable grotto with three silvery mushrooms poking out 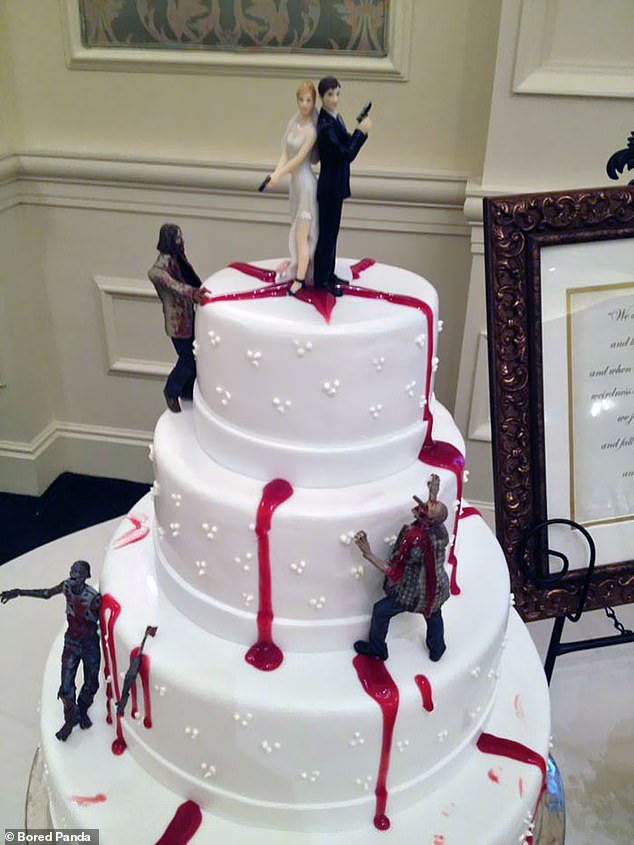 Off to a bloody start! This traditional iced cake would have been perfectly acceptable if it weren’t for the bride and croom shooting zombies from the top 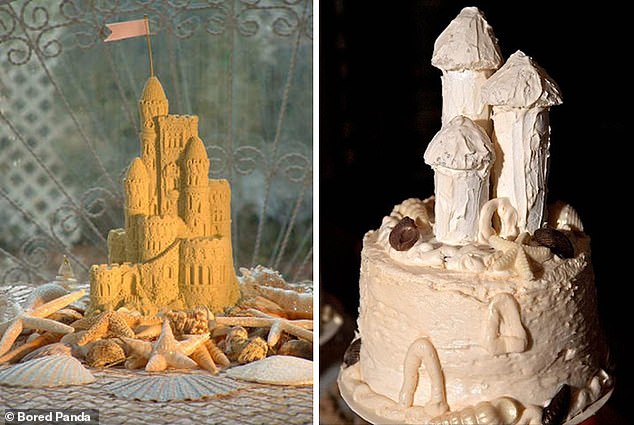 Not a fairytale! A couple who wanted their wedding cake to resemble a castle by the sea ended up with somethign rather phallic looking instead 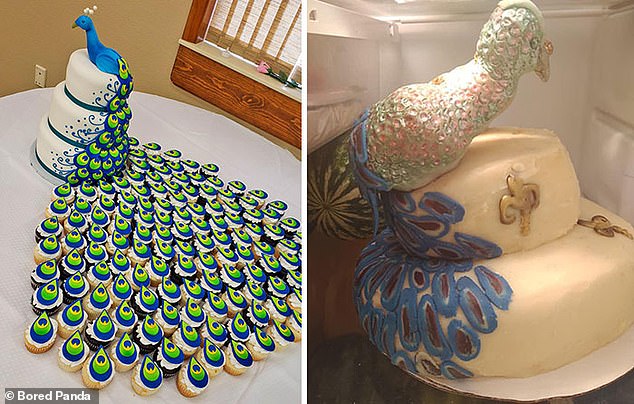 Not proud as a peackock! The silvery bird perched on two wobbly tiers looked nothing like the fancy creations surrounded by tail feather cupcakes that was requested 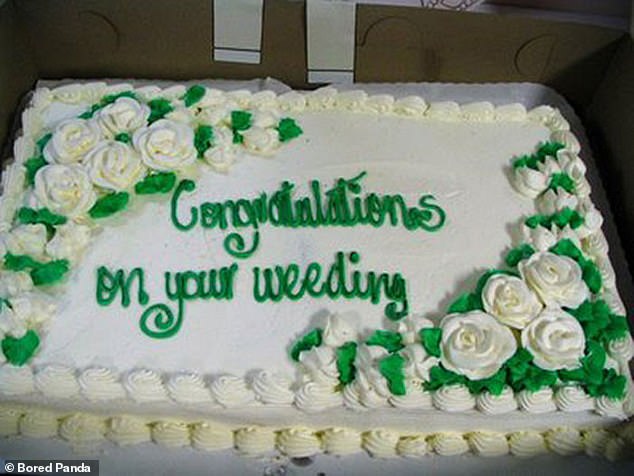 Perhaps they mixed it up with a gift for a gardener! This cake ended up with a very different message thanks to the addition of a rogue letter 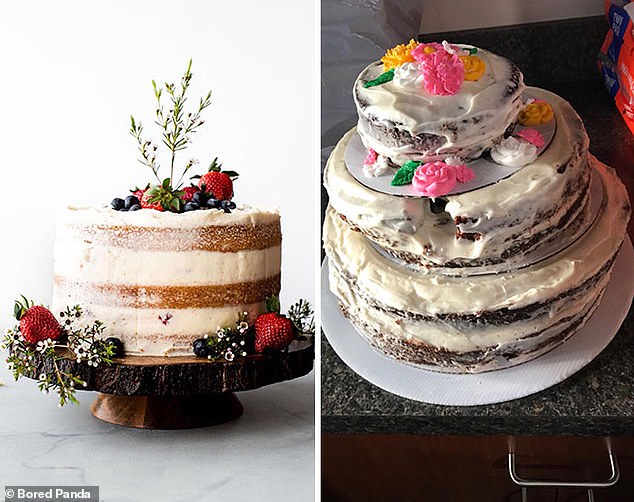 Expectation vs reality: A couple who requested an elegant naked cake ended up with a confection that looked as if it had been dropped 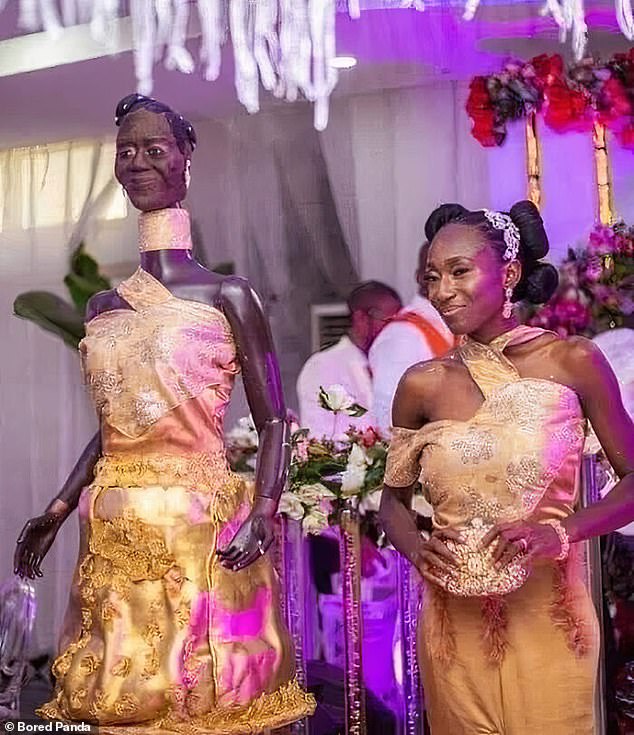 Grin and bear it! This bride can not have been flattered by a cake made in her likeness 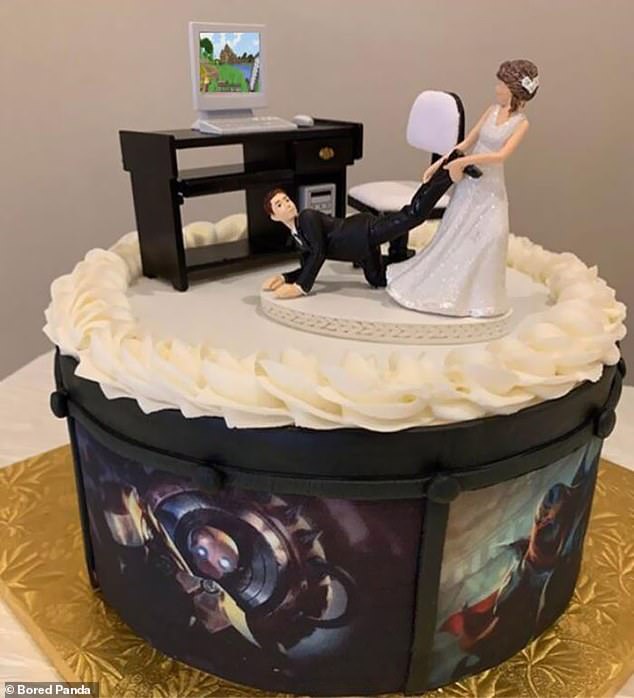 Sending a message! This bake seemed to indicate the not very romantic sentiment that the groom needs to be dragged away from his computer games 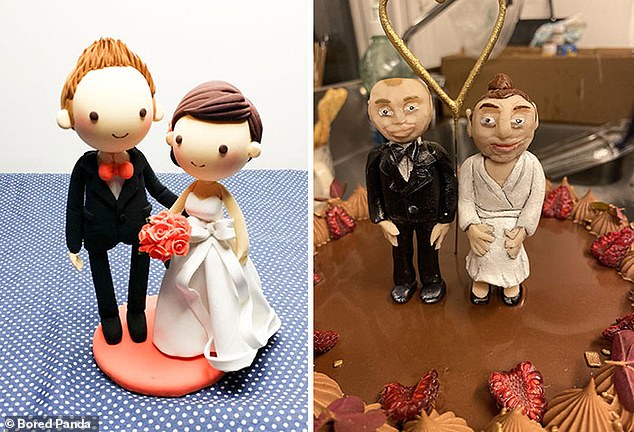 Til death do us part! The bride and groom seemed to have aged multiple decades in these bizarre cake toppers 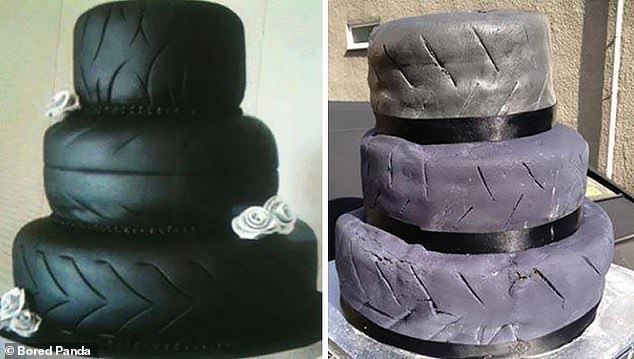 Not what I ordered! A couple who wanted something a little different in the form of a black tyre-style cake were no doubt left disappointed by the silvery mess 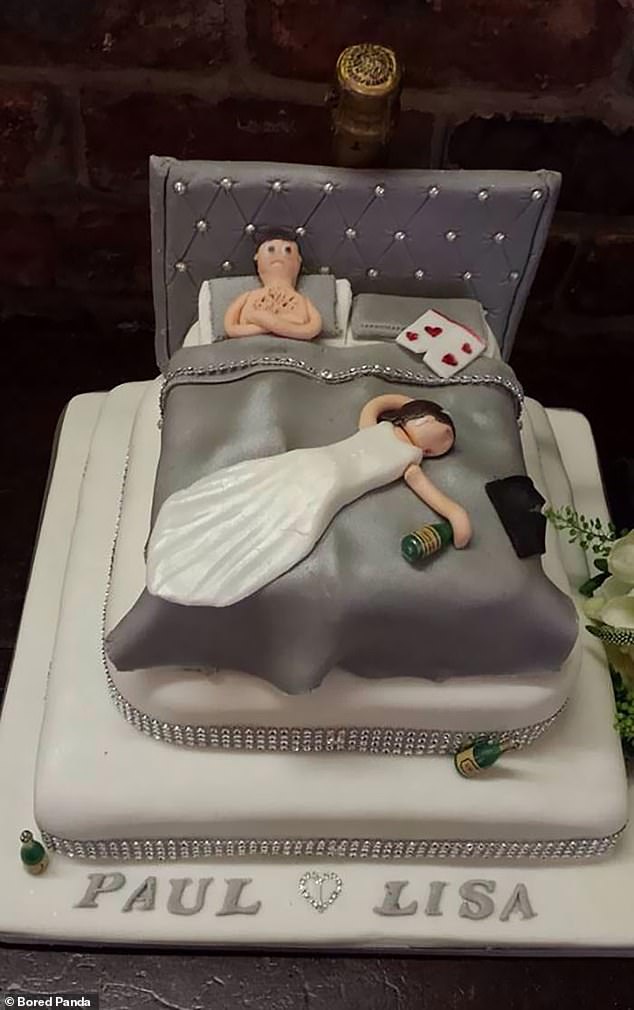 Let’s hope the wedding night doesn’t look like this! One cake predicted the bride would be rather worse for wear by the end of the evening 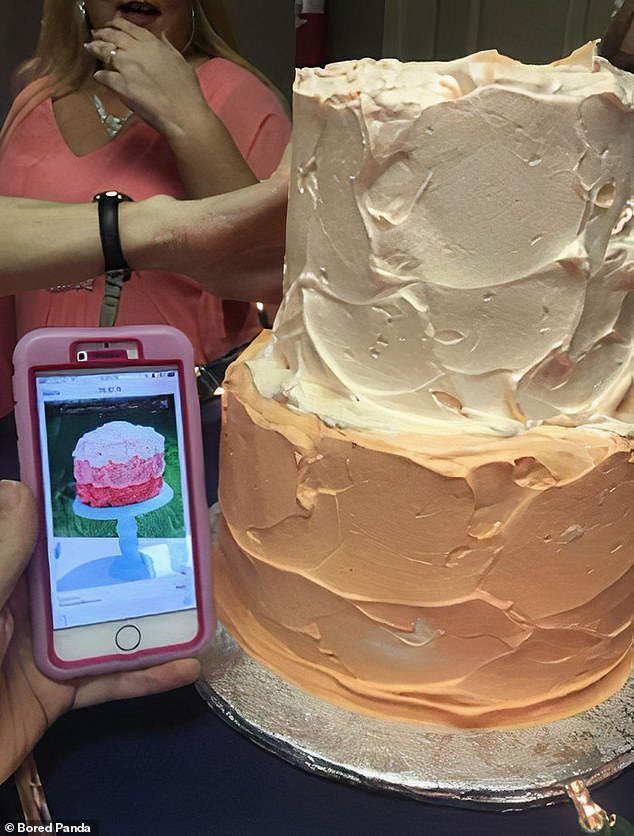 Sometimes it’s best to keep it simple, but this mulitcoloured cake that doesn’t look too difficult to recreate was still too much of a challenge 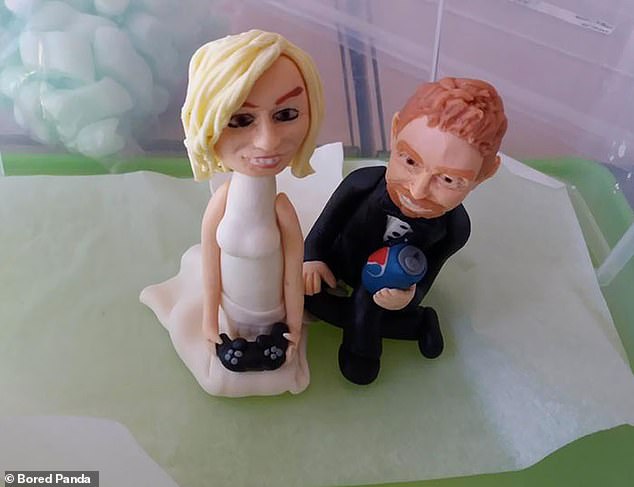 Not the most flattering likeness! A bride was not impressed to see herself represented with a gaming controller and a somewhat sinister smile