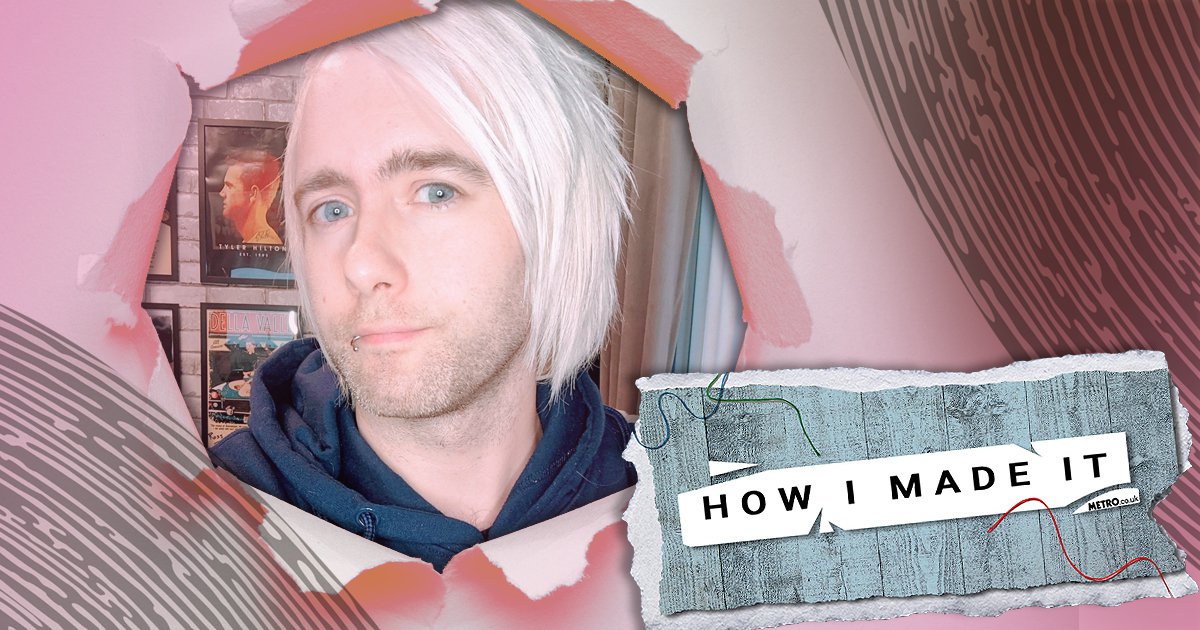 Welcome back to How I Made It, Metro.co.uk’s weekly career journey series.

This week we’re looking at web design with Ross Barber-Smith, a freelancer based in Glasgow who now focuses solely on building websites for musicians.

A music fan himself, he wanted to build a career in that industry but wasn’t sure how to do it from ‘behind the scenes’ – before realising he could use his software skills to marry two passions together.

Aged 35 now, he started building websites for fun from 12, not knowing he’d later make a living out of that skill.

Although, at the age of 16 he was told by a teacher to ‘stop dreaming’ after he admitted his ambition to be working somewhere in music.

‘It hit me pretty hard, as I was already a bit shy and unsure of how I was going to make it happen,’ he tell Metro.co.uk.

‘However, I think I did take those comments as fuel to try and prove that teacher (and other naysayers) wrong.’

His career goes to show you can work in a creative field without being centre stage.

Here’s how he did just that.

Hey Ross. What made you want to get into web design?

I got into web design almost by accident. A friend of mine and I were both really into a game called Petz back in the late 90s, and there was a pretty active community of fan sites in that space.

My friend had built a website about that, and I wanted to see if I could do the same.

It almost became a bit of a friendly competition when it came to redesigning the site to see if we could out-design each other!

As I grew out of the Petz space, I decided to start a personal blog (this was before the days of Myspace or Facebook) and was always redesigning the site, trying to learn new skills throughout the process.

Did you ever do formal training?

When I was 12, I was reading as many articles and books about HTML and CSS as I could, and teaching myself to use Photoshop through online guides.

When I decided this was what I wanted to do as a career, a lot had changed, so I was reading more up-to-date guides, took on an internship at a local design agency, started doing a bit of work for free so I could learn how to work with clients.

Eventually I started a job at a digital marketing agency – this taught me a lot about working to deadlines.

Tech jobs can be quite lucrative, but you now focus on music, a typically less lucrative area – if say you’re working with a smaller act, do you make less than your competitors?

It definitely can affect things, especially if you’re working with newer independent artists who are in the very early stages of their career.

There’s a lot of money in the music business, but it can sometimes feel out of reach.

But it’s more about striking the balance between being creatively satisfied and earning enough that you’re comfortable.

Some projects provide more of one than the other, but I’ve learned to be grateful for every opportunity that comes along – and sometimes the smaller projects can lead to much bigger ones, even if it’s months or years in the making.

Have you always loved music? Why did you marry these two areas together?

I fell in love with music at some point in the mid 90s, and just had a gut feeling that it was the industry I wanted to work in.

While I think everyone expected me to work with computers, music was my real love, so probably to everyone’s surprise, I went on to study music performance at university.

However, in my final year I had a bit of a confidence crisis when it came to the performance side of things, and had to decide how else I could be involved in music in a more behind-the-scenes kind of role.

Since I’d been doing web design on and off since I was 12, it seemed like a logical decision to combine my love of music with those skills I’d been developing.

The first time I had a go at this, it all clicked into place: I could design websites for musicians, which would tick all of the boxes for me.

An average day in the working life of Ross Barber-Smith

10am: The day begins, as Ross will start with his emails.

1pm: He’ll have calls with new and existing clients about possible projects and this will go on for most of the day.

5pm: He prepares for the next day so lots of the admin is done.

You’re based out near Glasgow, away from the central music hub. Do you find this has impacted your growth at all?

There are definitely days and weeks where I feel like living somewhere like London, New York, LA, or Nashville would be incredibly beneficial – but I think the world is so much more connected now than we ever have been, so location probably matters less than it did five or 10 years ago.

The biggest challenge is probably getting in front of people (especially at larger labels or management agencies), as they are inundated with emails on a daily basis, so getting their attention is harder than it might be if you were to meet them in person.

Thanks to Twitter though, I actually have clients in the US.

I use social media a lot to meet new clients, but ultimately I think the referrals and word of mouth is by far the best way of meeting new clients.

What do you love most about your job?

I get to help artists represent themselves visually online, and create websites that look as good as they sound.

I also get the opportunity to speak with and collaborate with artists on various levels, some I’m already a fan of, and others I grow to become a fan of as I get to know them better.

I’d say this probably goes for most freelancers and self employed people, but sometimes the admin side of things can be draining.

Chasing invoices and sending follow up emails are not fun.

How I Made It

Do you have an interesting job or career journey?

Email [email protected] to share your story for How I Made It.