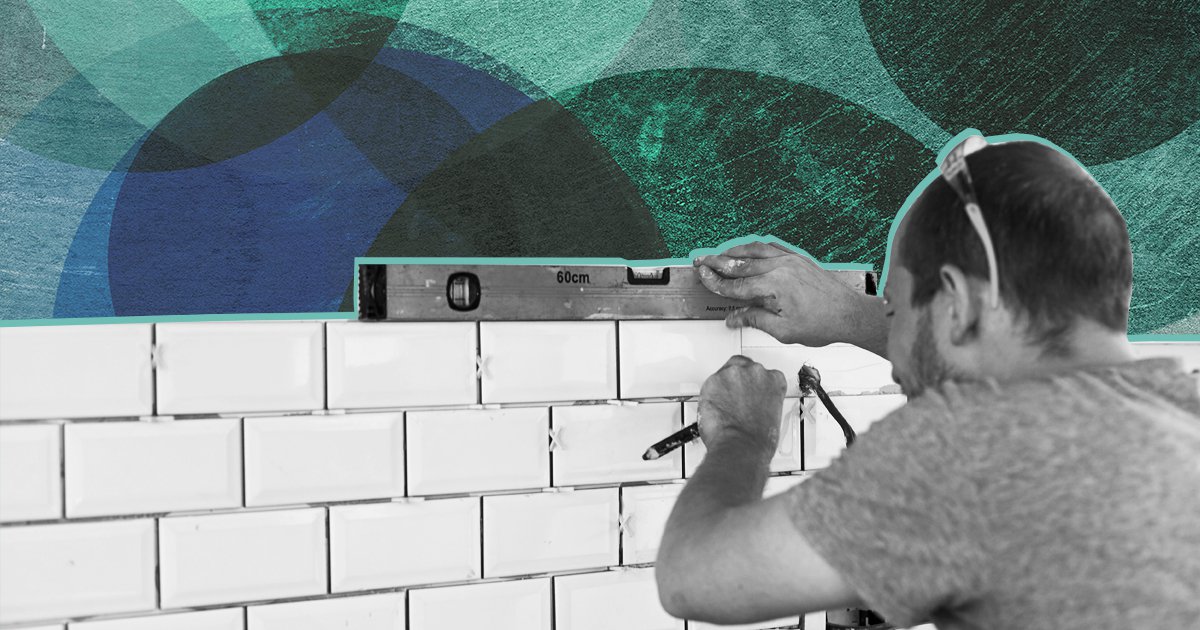 Tiling a wall yourself can be extremely rewarding.

But, it requires precision and patience – and there are plenty of steps to getting it right.

Mike Head, director at Atlas Ceramics, shares his top tips with Metro.co.uk to see you through the process, start to finish.

Ready to tile your own wall? Our guide will make it that bit easier.

Working out the tile layout

First, you have to sort out the layout. This ensures you get as many of the full tiles on the wall as possible, while avoiding any small little cuts, which can look unsightly.

Mike says: ‘Inevitably in some rooms, you will have to have a small cut – but by working out the layout before you start tiling, you can minimise that chance.

‘Then, using a vertical spirit level, line it up with the mark, and draw a line down the centre of the wall. This is your centreline – the line you will tile from.

‘Now you can work out the best layout of tiles. Hold a tile in your hand, place it on the centreline, and then, taking another tile in your other hand, place this next to the first tile, with a small gap to allow for a grout line.

‘Then move the first tile to the other side of the second tile, and so on – counting as you go.

‘This will tell you how many tiles will fit in. Because you started from the centre line, whatever cut the piece you’ll end up with at the end will be exactly the same at the other edge.’

It’s important to wear protective gloves, to help protect your hands from the adhesive which can be an irritant.

It’s advisable to wear goggles, to stop any adhesive from splashing into your eyes.

Now it’s time to apply some tile adhesive and start putting tiles on the wall.

Mike: ‘Use a bucket trowel to give the adhesive a slight mix – just to loosen it up, so that it’s more workable when you’re putting it on the wall.

‘Get a small amount on your bucket trowel and apply it to your notched tiling trowel. Then you ease it gently onto the wall.

‘It doesn’t matter how thick it is at the moment, or how consistent it is, you just need to get some onto the wall.

‘Repeat this once or twice, but keep in mind the rule of not covering too much of an area at once – as you don’t want parts of the adhesive to start to dry before you’ve had a chance to tile up to them.

‘As a general rule of thumb, you’d cover inwards of a square metre or enough adhesive as you could suitably work within twenty minutes.

Get the angle right for this bit.

‘Now it’s time to form the ribs – a process which will make your adhesive even, and adequate for applying your tiles to,’ Mike says.

‘Holding your trowel at a 45-degree angle, push the notched edge of your trowel into the wall, and drag it across the surface – pressing the defined prongs against the wall.

‘This will create a stretch of little troughs, called ribs.

‘It doesn’t matter which direction the ribs go in – vertically or horizontally – as long as they’re all going in the same direction.

‘Get rid of any excess adhesive from your trowels by scraping it off and putting it back in your bucket.’

At this point, you want them as clean as possible when you put them down to start tiling so that any excess adhesive doesn’t set on them.

It’s much harder to get off once dry – so always keep a bucket of water and a sponge handy when tiling.

Time for the final step.

Mike says: ‘Put your newly cleaned trowels to one side and pick up your first tile. Push it into the adhesive.

‘Use firm pressure and a slight side-to-side jigging motion to ensure a good, tight grip.

‘Take your next tile and put it directly next to the first tile initially, with no gap.

‘Again, use firm pressure and a slight jigging motion – then, with a finger, slide it slightly apart from the first tile. Just enough to fit your tile spacer in.

‘Open your bag of tile spacers, take one out, and place it between the two tiles you’ve just applied. Carry on with the process of adding tiles, and using the spacers as pegs, to keep the gap.’