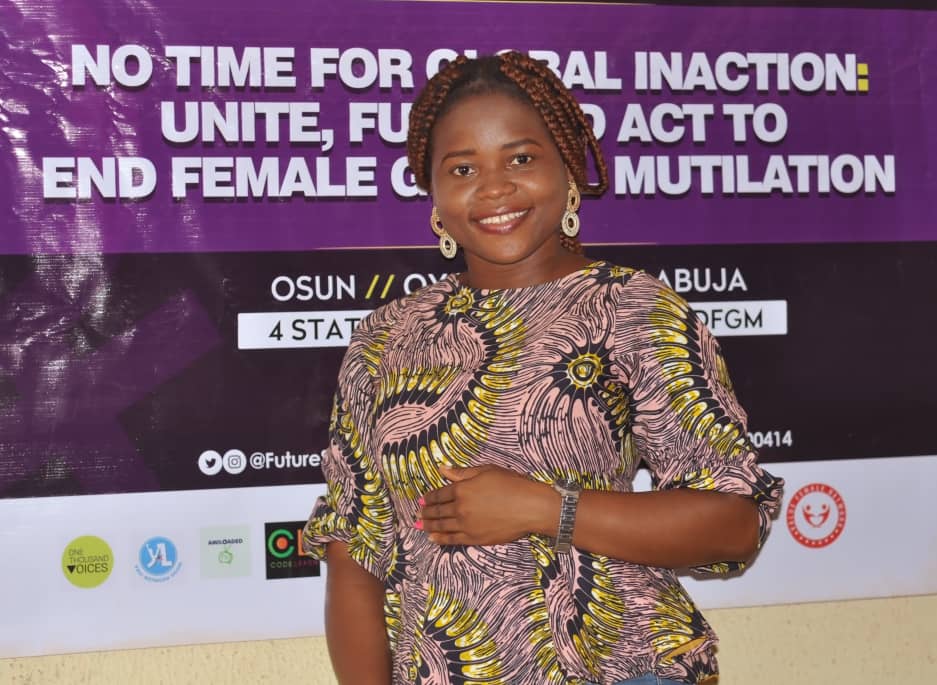 Reeling after listening to a lecture about the gross reality of female genital mutilation (FGM), I turned to my friends to vent.

I had just learned about how women’s genitals are cut by – often medically untrained – people with rudimentary, unsterile tools, causing horrendous physical and psychological damage.

That’s when two of my friends confided that they had been cut as children.

‘Are you serious?’ I asked, shocked to hear it was still happening.

I was appalled that the practice was taking place worldwide, but particularly in both rural and urban areas of my country, Nigeria.

In 2018, it was estimated that 200million females around the world underwent genital mutilation, with 20million women and girls being mutilated in Nigeria – 10% of the worldwide total.

At that moment in time, I would never have imagined that I was one of those statistics.

Ever since I was a little girl, watching people in films die from a lack of care has really moved me. This led me to study to become a nurse and, three years ago, I found my interest growing in women’s healthcare, particularly childbearing and reproductive health.

But after that lecture, my focus turned to FGM.

There are many false beliefs about why FGM is needed. One is that a woman will not be promiscuous if her sexual satisfaction decreases after circumcision. Others think that if left uncut after childbirth, the clitoris will grow as large as a penis. Some even believe that the pubic area smells bad if it is uncircumcised.

These are all myths. Thankfully, I did not hear them growing up, but my eyes were opened during my medical training.

Researching further, I found out that the current punishments for people practicing FGM in Nigeria are often too light. For instance, the penalty for first-time offenders in Osun State, where I’m from, is the payment of 50,000 naira (equivalent to £85) and/or a year’s jail term. But even these punishments are not usually enforced as the practice goes mostly unreported – a major part of the problem we advocates face.

I knew that something had to be done, so I joined the Future Shakers Initiative in the early days of its launch. It’s is a non-governmental organisation (NGO) and our mission is to provide solutions for social ills that threaten youth and community development.

FGM law in Osun hasn’t been reviewed since 2004, so last year Future Shakers met with the Speaker of the state’s House of Assembly calling for the law to be changed. It was during one of our conversations that he asked me why I was so passionate about FGM and whether I was a survivor.

Instantly, I replied that I was not, and that I was simply determined to campaign against the practice and educate as many people on the topic as possible. But returning home, I couldn’t help but wonder about it.

Although it was something I’d never asked my mother, I decided to tackle it head on. ‘Was I cut?’ I asked her.

To which she replied, ‘You were very little when it happened.’.

I was told that my paternal grandmother had wanted it done and that my mum had nobody to help her stop it. In those days it was seen as normal: my grandmother thought it was the right thing to do. But as she has died, I am unable to confront her about it.

Discovering, at the age of 22, that I was a victim of FGM made me sad, but I didn’t ask my mum any further questions because she clearly felt uncomfortable discussing it. Knowing more wouldn’t change anything; it doesn’t make me less of who I am. And thankfully, I don’t have any medical complications.

Although I have a partner, I’m not sexually active for religious reasons. But I’m not worried about it affecting my relationship – when we get to that bridge, we will cross it.

My concern isn’t for myself, but to stop FGM. However, this realisation helps me to connect with other victims when I’m trying to encourage and give them strength, and speaking to people who have gone through the same thing helps me get over it too.

In fact, it’s possible that many others the same age as me are also survivors, but do not know.

We have visited schools to tell boys and girls the truth about this practice because everyone, both male and female, needs to know it. We also visit people’s houses and it was on one of these occasions that I met a father who was planning on taking his daughter to be circumcised the following Monday.

‘I don’t want her to be promiscuous,’ he insisted.

Sitting with him, I explained that it would not have that effect, but that it would be very harmful to her, both physically and mentally. After I’d explained the medical issues that could arise, he changed his mind. Although I didn’t get to meet his daughter, I was delighted to have saved her.

Meeting people face-to-face has also made me realise that we need to intensify our efforts to stop FGM. We have to be able to reach various locations and we have to understand that the money the circumcisers get is their livelihood.

This makes it harder to deter them from continuing the practice, but we need to empower these people financially and train them so they can bring in money in other ways.

Due to the pandemic, we are even more concerned that FGM is happening unchecked: the cutters are not busy with other things and the children are not going to school. It is believed that at least 90% of girls born during this period are at risk of being cut.

The Future Shakers Initiative will host another virtual global conference this summer with speakers from all over the world and we are currently planning to do more community outreach. But logistics and a lack of funding makes it extremely difficult.

Last year’s meeting with the Speaker was a major breakthrough. He was impressed that young people like me were working passionately to end FGM and we are hopeful there will be a review of the law here within the next few months.

Until then, I’ll keep pushing until there are firmer punishments against people carrying out the practice and for those who are willing to listen to be educated on its barbarity. Although I want freedom from circumcision for women beyond Nigeria, my current focus has to be at home, in my state.

And while I don’t watch British TV shows like Eastenders, I’m glad a spotlight is being shone on the issue so awareness spreads and we can seek to end FGM everywhere, including the UK.

My family is proud of all I have achieved – I love both my nursing and advocacy work, and I’m still trying to find the right balance between them and shape my future career.

But I know I’ll never give up talking about FGM until it is eradicated.