The first dating app I ever hit “download” on was Plenty of Fish. I was 18, in my best friend’s basement, slightly buzzed off cheap wine when I made her a profile as a joke. POF began probing her with intimate questions. I laughed, but she stiffened and moved the phone closer to her eyes.

“This is kind of fun,” she admitted. When I left her place, the phone was still glued to her thumbs.

I started to sign up for Tinder on nights out, only to regret my matches in the morning and delete my profile, promising myself I wouldn’t go back. Like most addicts, I didn’t keep my promise for long.

When new dating apps began cropping up, I left Tinder to the hands of hookup artists. I met a stable environmentalist on Bumble. We dated for a year.

Post-breakup, I mourned our relationship before downloading a new app: one with no swiping involved. On Hinge, I met a serious paramedic, and then an erratic businessman. I dated each for two months.

After each breakup, I told myself I’d take some time. I wanted to concentrate on myself. I’d reflect on who I was and what I wanted. I wouldn’t download any dating apps.

Like clockwork, two weeks later, lying in bed alone, I’d crawl back to the app store and search “dating” in the blank white bar.

Drugs I don’t need; even alcohol I abstained from for an entire year. Dating apps? I craved them.

I’m sure there’s a psychological reason we get so addicted. A surge of endorphins or adrenaline when someone we consider attractive considers us attractive, too. All they do is flick their thumb one way, and we feel complimented, confident, validated.

Scrolling became the last thing I’d do before I fell asleep, the first thing when I woke up. At 7 a.m., I peered through sleep-crusted eyelashes at a glaring light just to see if I’d gotten a response that would make me feel fleetingly better about myself.

A 24-year-old probed me to consider giving up my unhealthy habit. In the upstairs of a hipster club, I caught the eye of a tall blond. When he started speaking to me, I realized I hadn’t been approached and hit on in person since … college? Feeling his body next to mine was euphoric ― an entirely different experience than stretching my fingers to zoom in on pixels lit up behind plastic. When I disclosed my age, he leaned in and said, “It’s OK, I like older women.”

“I’m not old!” I burst, shocked at his reaction to our three-year age gap.

Back in my bed, alone, I opened my dating app. Emoticons and pickup lines abounded, with no substance behind them.

Flirting in person showed me I want so much more than a 7 a.m. self-confidence boost from a guy who will never tell me his last name and takes several days to set up an actual date ― if he does at all.

I want more than cold fingertips on a touch-screen keyboard. I want eyes catching across the room, lips moving in vociferous sentences, hands grazing the nape of my neck, knees touching thighs to foreshadow a pressure point of intimacy.

I want the real stuff. In person.

Maybe I am old.

I teetered with the idea of deletion. Even if I did erase my account, how long would it last? Would I relapse? Would I become too content being on my own? Would I end up alone forever, with seven cats and a self-published novel?

Five days later, a guy I’d matched with told me he’d moved to the city with his ex, but broken up with her because he wanted to be free.

“And so, you downloaded a dating app?” I typed back.

“Yeah, not really looking to date here, but I’m open to whatever happens.”

His answer made me contemplate my own reasons for flicking through profiles of chest hair, beer bottles and dogs belonging to someone else. As good as it felt to have someone call me beautiful online, it felt a million times better to experience attraction in person.

And, if I was as honest with myself as this random guy was being with me, I’d admit I didn’t really want to go through the effort of meeting someone new. I hadn’t for a while.

Not the guy from London who sang an Ed Sheeran cover on his Instagram. Not the chef who wrote me strings of ornate words and admitted he just wanted to impress me. Not even the Australian who’d given me his number before backtracking, saying he should concentrate on his career.

There was nothing “wrong” with these guys I messaged, but it felt exhausting to even contemplate meeting them in real life. Confirming they matched their profile was so much more effort than simply twisting my finger a certain degree, and I guess that’s the point. Reality hit me like the “ping” of a new match: All I’m doing on a dating app is wasting time.

Time I could read good books, laugh with friends, sweat in hot yoga, cook new creations. Take classes, write articles, soak in bubble baths, preserving my eyesight and sleep and thumbs for someone, something, meaningful.

Without warning to any of my matches, I pulled the plug. Hopefully, this time, for good.

It wasn’t too long after that that I was sitting across from a cute guy, fresh wet sushi smothered in peanut sauce filling the table between us.

I didn’t give in to the rush of Hinge. I didn’t redownload Bumble or even fall prey to shirtless selfies on Tinder. I didn’t meet the man in front of me on a dating app. He was an old friend, an acquaintance, the smallest spark four years ago that he remembered and decided to give a shot.

If I’m honest, my memory of him was fuzzy. I remembered talking to him at parties, both of us tied into happy-enough relationships. I recalled him as slightly unattractive and shorter than me. Over slushie rosé drinks, I told two of my girlfriends there was no way I’d be into him. Besides, I was happy on my own.

I walked to the restaurant in my fitness clothes, too apathetic to change. Tavis squeezed me into a hug against his definitely-taller-than-me body. Our chemistry flared at the same time our mutual friend texted me, “Everything happens for a reason.”

I didn’t kiss him when he walked me to my car, but it didn’t take long. He planted one on me in his kitchen while frying up vegan burritos a few days later. The next night, he brought me a sunflower. A week in, he brought my mom flowers. He wrote me a song, then a poem. He was real and tactile and more than I could’ve imagined in my flurried daydreams as I swept right and left and, sure, I guess, right. 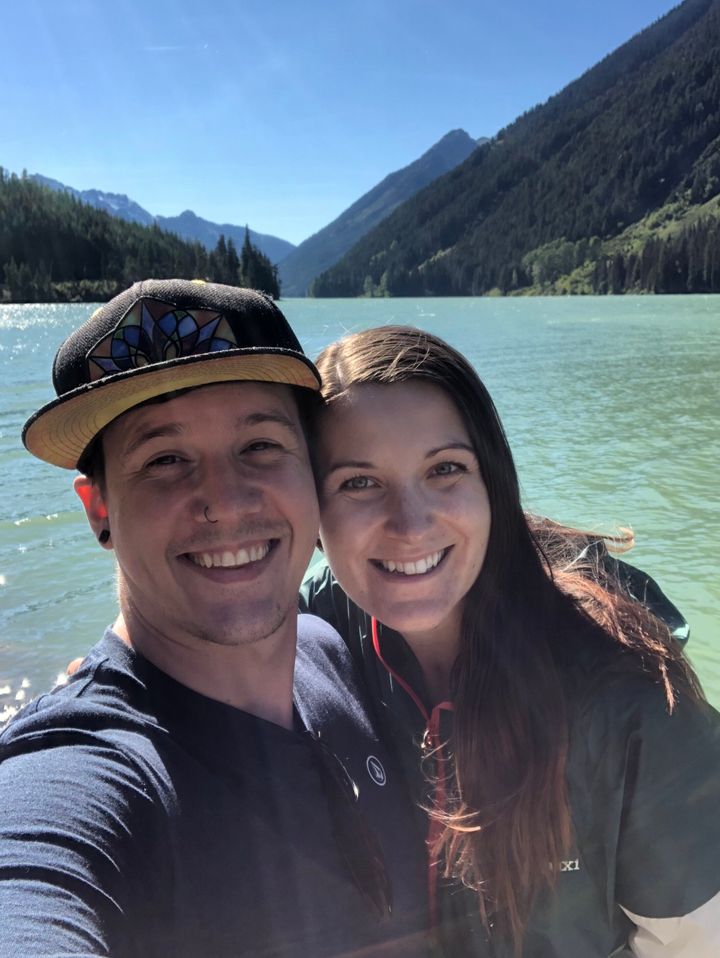 Tavis didn’t help me get over my fixation on finding the next best swipe. I was already over it, all on my own. Even if I didn’t know it, I was open to him because I was closed to finding an elusive something better on my iPhone screen.

Tavis wasn’t a reward for beating my dating app addiction. But it was only after I decided to stop looking that I found myself connecting with someone who craved getting to know the real me, beyond whatever 50-character bio, prompting question-and-answer or bikini-clad photo could ever tell a stranger on the internet.

For the first time, I’m not worried about it not working out. I’m not worried about being alone. I’m reassured on my own. I don’t want to look to the digital world for compliments or love. I don’t even miss it. I’d like to think that even if I didn’t have Tavis, I would no longer be searching, swiping, waiting.

On Sept. 15, Tavis and I celebrated our one-year anniversary. What started as a friendship blossomed into a genuine connection and evolved into the most mature relationship I’ve ever experienced, no swiping required.

Do you have a compelling personal story you’d like to see published on HuffPost? Find out what we’re looking for here and send us a pitch!