I was once in a painfully one-sided relationship. To make matters worse, my partner at the time put his ex-girlfriend on an unreachable pedestal. He raved about her achievements, while I practically had to do backflips to win his approval.

One day I happened to stumble upon his ex's Facebook page (by entering her full name in the search field). I'll just take a glimpse, I thought. Just a little reconnaissance to scope out the enemy. Two hours later, I was knee deep in the mid-noughts, knew intimate details about her pet rabbit's glaucoma and was far too invested in her brother's messy divorce. I found myself visiting her social pages more and more frequently – what we now call "online stalking". 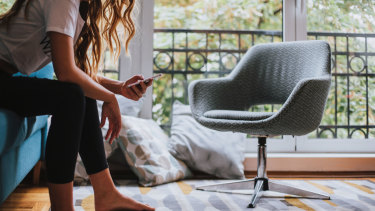 A new tenant had moved into my head: a troll who could rival the best of them.Credit:Stocksy

I'm not alone. In a recent survey, 88 per cent of participants admitted to stalking their ex and 80 per cent stalked their partner's ex. I reached out to random friends for corroboration: five out of eight confessed they'd stalked a woman who was sexually connected to a partner or ex.

Their stories confirmed that the practice can cause the seemingly sanest person to appear unhinged. These days, online stalking is so common a range of apps have been created to purge you of your stalkee by "disappearing" them online.

I needed to purge. My online stalking was taking on an addictive quality and I felt like a creep. At the time, I was seeing a therapist, but my shame was so acute it took me months to come clean to her. Eventually, I did – and together we unpacked the reasons for my behaviour.

I knew my partner saw a woman's beauty as paramount. I came to see that I'd also internalised this value. The more he distanced himself from the relationship, the more useless and insecure I felt, until my self-esteem was so low I believed the only currency I had left to haggle with was my looks.

According to various studies, the internet is causing more women than ever to self-objectify – to see themselves primarily as sexual objects whose worth is measured by their physical attributes. In her popular TED Talk, gender-justice activist Dr Caroline Heldman says that self-objectification fortifies the belief held by women that male attention is a "cherished finite resource".

This threat of scarcity generates a "loot mentality", compelling women to denigrate others in order to gain a competitive advantage – to hijack one another's power, in other words.

It makes sense. In hindsight, my stalking was clearly an attempt to siphon the worth of another in order to fill my own empty confidence tank.

I like to think I'm a nice person. But a new tenant had moved into my head: a troll to rival the best of them. I visited my stalkee's social pages, searched for her worst photos and conjured up all sorts of nasty thoughts about her.

And it actually made me feel better – temporarily. I received an instant dopamine hit, followed some time later by an avalanche of self-hatred that forced me to return for another hit. Stuck in a vicious cycle, my behaviour reinforced the notion that I was trapped in a sort of permanent, inescapable beauty pageant, with male attention as the prize.

Through therapy, I was able to admit that my partner's ex was a target because she had achieved success in all the areas in which I felt like a failure. I didn't hate her, as I had suspected. I admired her. I wanted to be like her.

Once I tackled my jealousy, I discovered that all of the flaws of hers that I'd spent time zooming in on were fabricated – distorted projections of my own insecurities. She was an attractive, accomplished, likeable girl and – over time – I could appreciate why my partner admired her.

It's easy to hate someone. It can even feel good, in the same way it feels good to remove excruciatingly tight shoes after a night of dancing. What isn't easy is zooming in on the ugliness inside yourself. It's hell, actually.

A great deal of the mainstream messages today encourage women to view each other as enemies. My therapist showed me how to rewire that conditioning by adopting a feminist slant. Last year, a US study of 500 women demonstrated a direct link between Instagram use and self-objectification. Interestingly, subjects with strong feminist beliefs proved immune. Whereas, for subjects with weak feminist beliefs, the effects were intensified.

So, it turns out there are many women out there who, like me, are clumsily grappling with low self-worth. And feminism is the cure.

Maybe somebody is on Facebook right now, zooming in on my unusually large forehead. If that's true, I hope they stalk me long enough to read this article, so they can see that they're not alone and I'm not the enemy. And if that fails, they can always "disappear" me.

This article appears in Sunday Life magazine within the Sun-Herald and the Sunday Age on sale May 26.