The past two weeks of debate in the federal parliament provided a glimpse of the spirit of co-operation that will be needed to deliver fundamental progress on climate change. The ALP, the Greens and teal independents joined together on Thursday to pass a bill through the House of Representatives that enshrines in law the ALP’s campaign pledge to reduce greenhouse gas emissions by 2030 to 43 per cent below 2005 levels.

Prime Minister Anthony Albanese said there was an “opportunity to end the climate wars”, the bitter battles between the Coalition and other parties – and within the Coalition – that have stymied effective action for a decade. 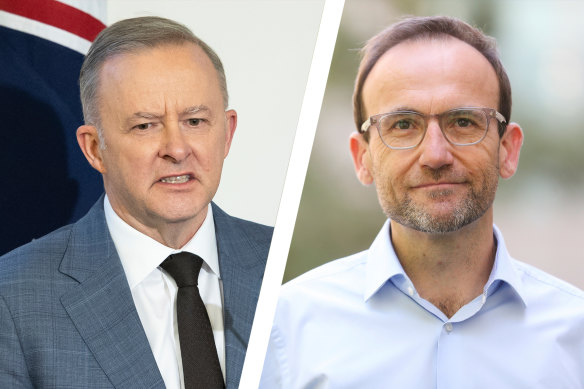 The bill’s target is clearly inadequate if Australia is to play its part in stopping the dangerous rise in global temperatures, already evident in events such as the unprecedented heatwaves and droughts in Europe this summer. But it is encouraging that the non-Coalition parties were willing to put aside their political interests and take a strategic approach.

Until a week ago, it was unclear if the Greens and the seven teal independents who all campaigned for faster action would endorse the bill. But they wisely chose to pass it rather than repeat the mistake in 2009 when fighting between the Greens and the ALP killed the first attempt at a carbon tax.

Passing the legislation with only minor amendments has allowed the Albanese government to shrug off attacks from the recalcitrant Coalition that Greens and climate extremists are pulling the strings.

Deputy Prime Minister Richard Marles said provocatively that the government had given the Greens nothing. Former prime minister Paul Keating took a swipe at the Greens’ claim to the moral high ground this week, calling party leader Adam Bandt a “bounder”.

This public theatre of hostility between the Greens and the government helps both sides politically, as each differentiates itself and speaks to its base. Nevertheless, there is some hope they can work together.

The government made some minor concessions to the teals in the lower house by adopting their amendments, making it clear that the 43 per cent target was a floor and not a ceiling and requiring timely publication of emissions data. And in the Senate where it will need the support of 12 Greens and an independent such as ACT senator David Pocock or Tasmanian senator Jacqui Lambie, the government may have to adopt a much more flexible approach.

The ALP might try to play hardball in the knowledge it can implement most of its climate agenda without this bill.

But some of the crossbench’s proposals are sensible and need not clash with the ALP’s election promises. Lambie has called for compulsory assessment of the impact on the greenhouse gas emissions of a range of policies such as the diesel fuel rebate. Pocock says he wants tighter rules on the use of credits that companies can use to meet carbon reduction obligations.

The most difficult issue is the Greens’ demand for a ban on new coal and gas mines, in light of predictions that the fuel from existing mines is already enough to exceed the world’s carbon budget.

Yet the Greens must ask whether the Australian electorate would be frightened by a total ban, which the ALP specifically rejected during the election.

This will be a hard debate, but the US has provided a surprising example in the past few days of the scope for co-operation between progressives and centrists on climate action.

Two centrist Democrat senators, Joe Manchin and Kyrsten Sinema, who have for the past year blocked President Joe Biden’s plans for climate action, agreed to a compromise bill which includes about $370 billion of climate energy measures.

Supporters of climate action in Australia’s parliament will need to continue finding ways to achieve a practical compromise.