How glorious that the £75m Willy Wonka of teacakes has been handed a gong. Superfan JAN MOIR bows down before the Prince of the pleasure dome

There is only one question to ask about Sir Boyd Tunnock’s recent knighthood in the Queen’s Birthday Honours List. In the name of all that is legendary in Scottish confectionery, why did it take so long?

Never mind all the 86-year-old’s charitable works, his splendidly raffish moustache or the fact that he drives around in his Rolls-Royce with the boot packed with choccy treats to give away.

For this is the man who invented the Tunnock’s Teacake, the most delicious teatime treat of all time. Shush! Arguments will not be tolerated. 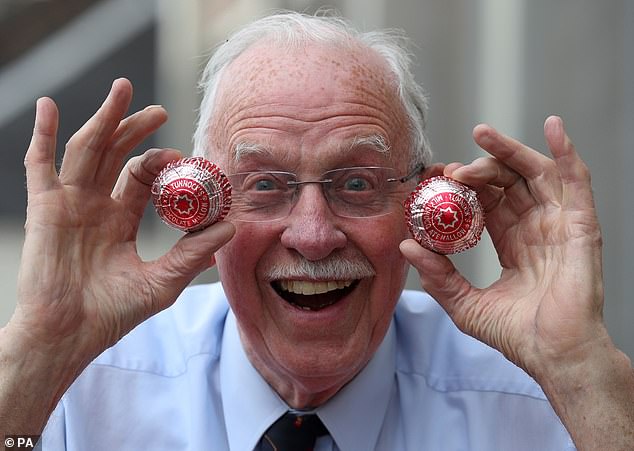 In the name of all that is legendary in Scottish confectionery, why did it take so long for Sir Boyd Tunnock to be knighted?

The Scottish-based family firm of Tunnock’s also make Caramel Wafers, Caramel Logs and Snowballs, but since its launch in 1960, it is the teacake that has reigned supreme.

At the factory in Tannochside, Uddingston this ball of fluffy scrumptiousness has no peer when it comes to rivals on the teatime table. It beats the Battenberg, knocks the upstart Walnut Whip out of the park, while the Wagon Wheel should do itself a favour and roll away into a ditch.

Sir Boyd, who is known as the Willy Wonka of Tannochside, loves them so much that he always pays £20 for his Tunnock’s Teacake if he comes across a café or kiosk selling them. ‘It’s my way of saying thank you,’ he says. Keep the change!

You have to admit that the Tunnock’s Teacake has it all; an air of mystery, a political hinterland, even a hint of glamour.

Boyd’s exact marshmallow recipe is still a closely guarded secret after all these years, while ardent Scottish Nationalists staged a protest at the factory a few years ago when they mistakenly believed that Tunnock’s were removing the Scottish lion rampant motif from their packaging. 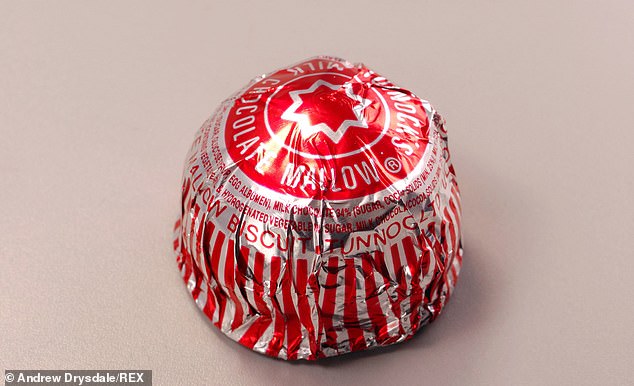 The Tunnock’s Teacake is the most delicious teatime treat of all time. Shush! Arguments will not be tolerated

‘It was a storm in a teacake. Only three of them turned up,’ said Boyd. ‘And there were 12 reporters. It was the best bit of advertising we never did.’

Coldplay singer Chris Martin claimed that choosing between a teacake and a caramel wafer was like picking between John Lennon and Paul McCartney, while cookbook author Nigel Slater once wrote that ‘one of the downsides of a distinctly middle-class childhood was that we got Cadbury’s Mini Rolls instead of Tunnock’s Teacakes’.

Until Nigel mentioned it, I had no idea there was a class element to the Teacake. Can that really be true? I bet the pantries in Balmoral are stocked to the rafters with the little beauties.

Of course, the whole concept is an enigma wrapped in foil, because the world’s favourite teacake isn’t a teacake at all, as it contains neither fruit nor yeast.

It has a biscuit base, a marshmallow centre — Italian meringue, to be precise — and is covered in a coating of real chocolate that cracks appealingly when first breached. 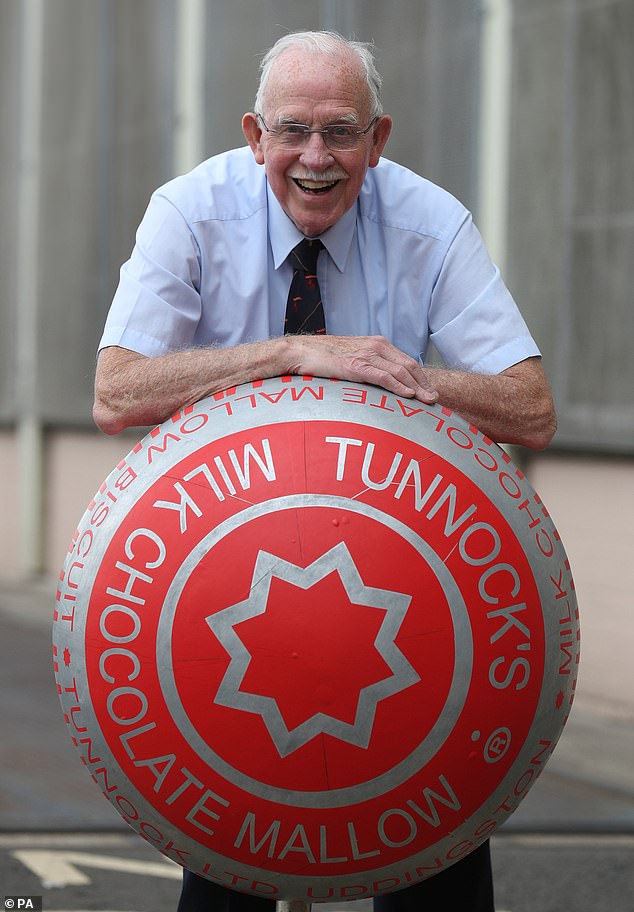 At the factory in Tannochside, Uddingston this ball of fluffy scrumptiousness has no peer when it comes to rivals on the teatime table

Welcome to the pleasure dome, it seems to sigh as you sink your teeth into one.

How did they come about? In interviews over the years, Sir Boyd always errs on the prosaic side when describing this golden moment in teatime antiquity.

‘I got some biscuits made by hand, piped the cream by hand, put on the chocolate and we put them in cases. We didn’t wrap them at that time. An agent took a box and they sold very well,’ is how he puts it.

Perhaps their greatest moment came at the 2014 Commonwealth Games in Glasgow, which were sponsored by Tunnock’s. At the opening ceremony, dancers wearing giant teacake costumes capered around Celtic Park to wild cheers — and sales went up by 60 per cent the next day.

Boyd Tunnock was supposed to retire 21 years ago but is often in his office at the factory at 6.30am. (After serving his baker’s apprenticeship here, he has never been able to shake off the habit of early hours.)

On the walls behind his desk hang two family portraits — his grandfather Thomas Tunnock, who started the family business in 1890, and his father Archie, who later took it over.

There is no laptop on his desk, but he does have a joystick to control the factory cameras and a bank of screens so he can keep an eye on production, with over ten million biscuits and cakes produced every week. How things have changed. 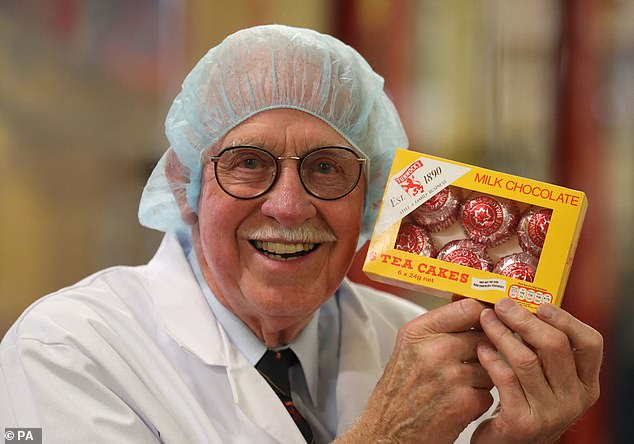 Boyd Tunnock was supposed to retire 21 years ago but is often in his office at the factory at 6.30am

For the first 50 or so years of its life, Tunnock’s was a bakery and tea room, with a catering operation attached which supplied weddings and events.

That changed in 1950, when rationing was still in force and Archie decided he needed to make a product for the bakery that had a longer shelf life than a cake.

He bought some wafers and began experimenting with caramel and chocolate ‘Everybody loves caramel,’ he reasoned.

The Caramel Wafer went into production in 1952 and was an immediate success.

Other signature products followed — the Snowball, the Caramel Log and then the Teacake. These are the core products, whose packaging and appeal have barely changed for over half a century.

‘We haven’t changed the products,’ Sir Boyd has explained. ‘We don’t need to.’

Not everything at Tunnock’s has been a roaring success. 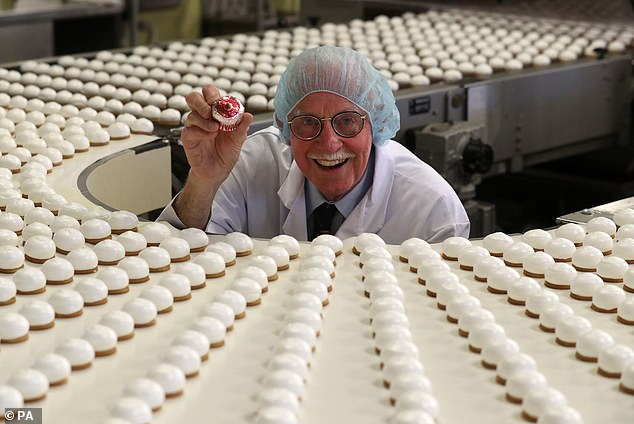 Archie Tunnock once launched a nationwide competition — on the then new Scottish Television channel — to find a new name for a product. The winning entry was called Jocklate — geddit — but sadly it never caught on.

The Tunnock family’s wealth is estimated at £75 million, while their products are exported around the world and are particularly popular in the Middle East where the locals’ sweet tooth is a match for Scotland’s.

Saudi Arabia is Tunnock’s biggest export destination outside the UK, reputedly because a Saudi king once decreed that a Tunnock’s caramel wafer should be included in all the free lunch boxes given to children in the kingdom.

Tunnock’s now employs nearly 600 people, but it is still very much a family business. Sir Boyd’s children and grandchildren work for the company, which has never borrowed any money and is not for sale at any price. ‘I’m disappointed if I don’t get three offers for the business a year,’ he says.

Sir Boyd had a small heart attack in 2013 and a recent small operation on an ankle. After the heart episode, he stopped wearing his Rolex watch because ‘you’re always looking at it, worrying that you might be late’.

He can still walk, but often whizzes around the factory on an electric scooter. Archie worked until he was 86, and his son sees no reason not to do the same.

A passionate sailor, he has a yacht called Lemarac (caramel spelt backwards) and recently donated £260,000 to pay for a new lifeboat in the Borders village of St Abbs, following the closure of the local RNLI station.

On the day his first cheque of £10,000 was received, the appeal’s organiser Euan Gibson rang Sir Boyd to thank him personally. Tunnock was so touched by this charming civility that he decided to donate the full amount required to buy a lifeboat outright.

‘That’s a lot of caramel wafers — but he took the initiative, that is what it’s all about,’ said Sir Boyd.

Good manners cost nothing, as he would be the first to say himself. Let’s hope he remembers to say thank you nicely to the Queen.