Look who’s back! Snooki is making her triumphant return to ‘Jersey Shore’ when the show comes back in June, and of course, she’s bringing the party!

Jersey Shore: Family Vacation is coming back on June 3! This time, the cast is traveling to the Poconos for a winter trip, and there’s a surprise in store during the getaway — Nicole “Snooki” Polizzi is back to “shake things up,” according to a new press release. In a trailer for the upcoming episodes, Snooki pops out of a cardboard cake with two bottles of champagne. There’s also footage of her falling down some stairs after a night of partying. It’s like nothing’s changed, right?!

Snooki decided to quit Jersey Shore after Angelina Pivarnick’s wedding at the end of 2019. She announced her decision that December. The wedding took a toll on the female cast members of the show, as Angelina got angry at Snooki, Jenni “JWoww” Farley and Deena Cortese for a speech that they made at her wedding. After the incident, Snooki realized she was no longer happy starring on the show. 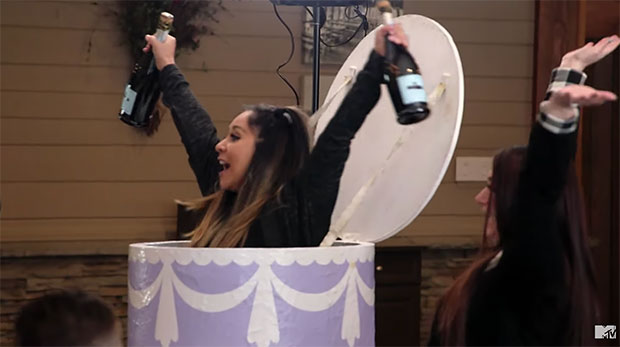 “I was forcing myself to be happy, and, and I’m like, ‘That’s not me,’” Snooki previously explained. She also has three kids at home now, and leaving her family to film began to take a toll on her. “I just hate being away from the kids,” she admitted. “I don’t like partying three days in a row. It’s not my life anymore. I want to be home with the kids.” She also admitted that the show “getting so dramatic” wasn’t enjoyable for her anymore. “I want it to be fun and lighthearted and lately it’s not that,” she explained. 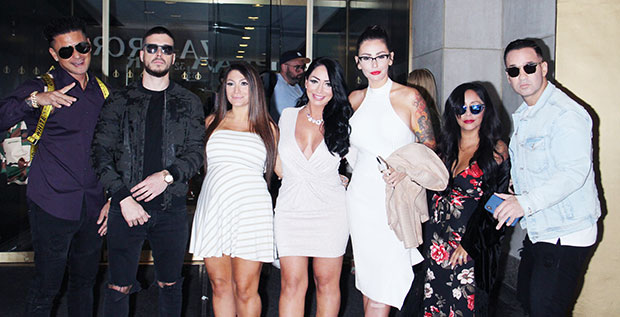 When the rest of the cast returned to film a new season at the end of summer 2020, Snooki was not present, and she did not appear in any of the episodes, which aired earlier this year. The episodes focused on the aftermath of Angelina’s wedding, as the boys’ tried to mend the girls’ relationship so that they could all move forward. By the finale in February, both Deena and JWoww were on amicable terms with Angelina. It’s still unclear whether or not Angelina and Snooki were able to work out their differences off-camera, as well, but photos surfaced that showed the ladies filming a scene for the show together in early March.

We’ll have to wait and see whether the upcoming episodes address that drama, but either way, there are still plenty of exciting things to look forward to! The new episodes will feature JWoww’s engagement, as well as Mike “The Situation” Sorrentino and his wife, Lauren Sorrentino’s, journey to welcoming their first child. Meanwhile, Deena is pregnant with baby number two, and Pauly D is going strong with his girlfriend, Nikki Hall. Jersey Shore returns on June 3 at 8:00 p.m. on MTV.