Taylor Swift brought to light an important issue in the music industry this weekend. On Sunday, June 30, it was announced that Scooter Braun acquired Swift’s entire catalogue of six studio albums. Swift claimed in a Tumblr post reacting to the acquisition that Braun owning her past work is her "worst case scenario," saying that he’s been bullying her for years and that she had no say in his purchase of her music. That included an old Instagram of Justin Bieber’s (whom Braun manages), and Justin Bieber’s reaction to Taylor Swift accusing him of bullying has divided public opinion.

Swift posted to her Instagram story on June 30 reacting to the acquisition news. The post was a screenshot of one of Justin Bieber’s old Instagrams from back when Swift’s beef with Kanye West and Kim Kardashian was at its peak. Bieber had posted a screenshot of a FaceTime call he had with West and Braun and said, "Taylor Swift what up" in the caption. Swift’s post had a caption on it, as well as a link to her much longer Tumblr post.

"This is Scooter Braun bullying me on social media when I was at my lowest point. He’s about to own all the music I’ve ever made," she said in her caption. 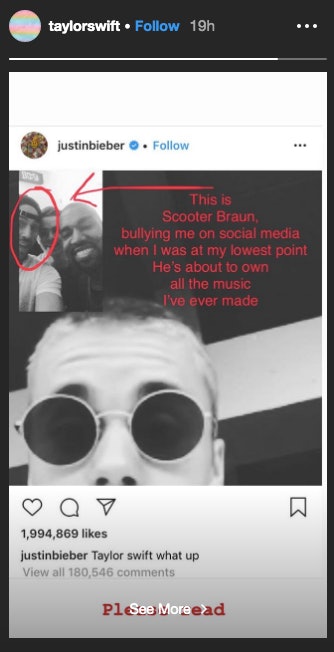 Bieber responded on his own account, posting an old photo of him and Swift from back when she still made country music. But before we can dive into his response, though, there are some things from Swift’s Tumblr post we have to check out first.

Swift’s post outlined why this acquisition hurt her so much. It wasn’t only because she’s trying to own her own music for years (which makes sense… she has written/co-written all of her own work since day one), but also because of the person who now owns it all. (Braun, for the record, also manages Ariana Grande and most recently, Demi Lovato.) It was part of the record deal she signed when she was 15 years old that she couldn’t own her work, which unfortunately is a contract scenario a lot of kid/teen artists get roped into.

"For years I asked, pleaded for a chance to own my work. Instead I was given an opportunity to sign back up to Big Machine Records and ‘earn’ one album back at a time, one for every new one I turned in," Swift said in her post.

"I walked away because I knew once I signed that contract, Scott Borchetta would sell the label, thereby selling me and my future," she continued. "I had to make the excruciating choice to leave behind my past. Music I wrote on my bedroom floor and videos I dreamed up and paid for from the money I earned playing in bars, then clubs, then arenas, then stadiums."

That’s when her comments about Braun came in. She said,

"This is my worst case scenario," she added. "This is what happens when you sign a deal at fifteen to someone for whom the term ‘loyalty’ is clearly just a contractual concept. And when that man says ‘Music has value’, he means its value is beholden to men who had no part in creating it."

I feel for Swift on this one. Not owning the music you’ve created must be a horrible feeling, and whether or not Swift’s bullying claims are true, she clearly doesn’t trust the person who now owns her life’s work. That sucks, plain and simple.

Bieber felt the need to step in.

“First of all i would like to apologize for posting that hurtful instagram post, at the time i thought it was funny but looking back it was distasteful and insensitive,” Bieber said in his caption. That’s mature of him to admit that the post was in poor taste.

“I have to be honest though it was my caption and post that I screenshoted of scooter and Kanye that said ‘taylor swift what up.’ he didnt have anything to do with it and it wasnt even a part of the conversation," he continued. "In all actuality he was the person who told me not to joke like that. So for you to take it to social media and get people to hate on scooter isn’t fair."

Then Bieber went on to talk about how he felt that Swift only posted her Tumblr post to send her army of fans against Braun. He said,

Oof, the drama. While it seems as if Bieber’s intentions were good, it feels to me like he’s inserting his commentary into something that’s a much bigger issue than he’s making it out to be. Regardless of what Swift and Bieber find to be true about Braun, Swift does not trust her music in his hands. That’s a deeply personal business conversation that shouldn’t be resolved over open communication between a couple of people. Feeling for Swift here.