The wind didn’t cooperate when Below Deck guest Steve Bradley wanted a foam party. The fun-loving charter guest ultimately received the moniker of “foam man” because he stood almost alone in a sea of flying foam on deck as some of the crew jumped in to party with him. 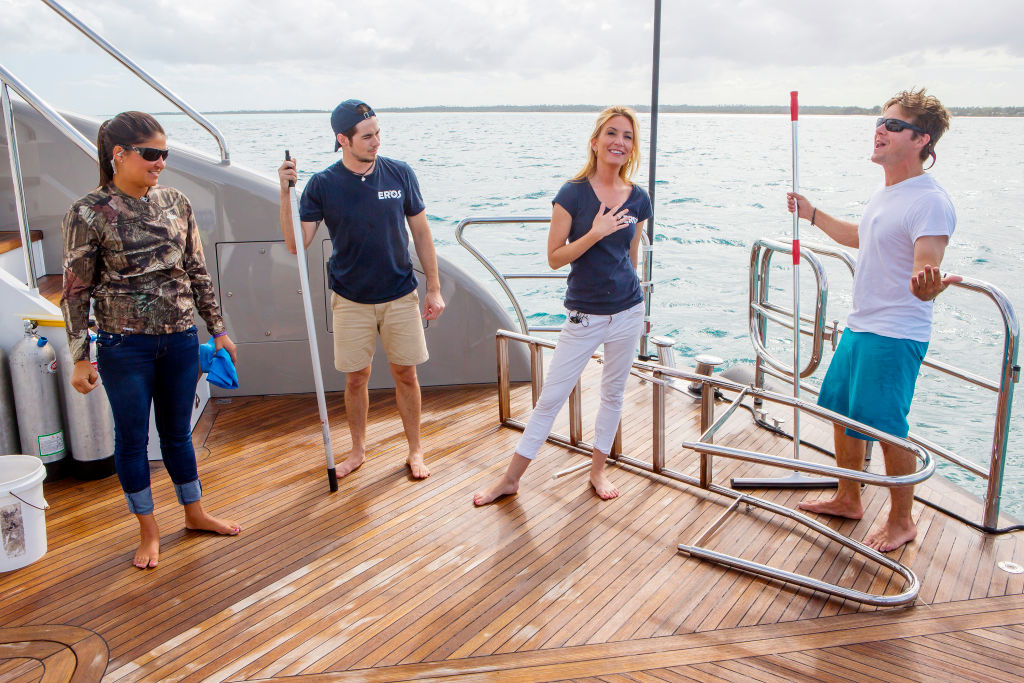 Although Bradley’s foam party didn’t go as planned, chief stew Kate Chastain reveals some crew members ended up having the ultimate “foam” party, which could have seriously damaged the boat. She dished about what she considered to be her favorite moment on the show when she, deckhand Connie Arias and stew Amy Johnson overloaded a cabin bathtub with soap and the situation got completely out of hand.

Johnson, Arias, and Chastain talked about the evening when they assembled for the Below Deck 100th episode celebration. Although the fun was captured on camera, the trio offered additional insight.

The crew usually blows off steam in between charters. While this typically means getting blackout drunk at the bar, the trio thought instead they’d treat themselves to a bubble bath on the boat. “Bubble bath party!” Johnson exclaimed.

“It was Amy Johnson, Connie, it was season 3, we went to take a jacuzzi bath in the master, we were drinking a lot of champagne,” Chastain recalled. While Chastain and Johnson changed, Arias took it upon herself to get the bubble bath ready.

before we were born, God said to himself, "January 2 is a pretty shitty time of year to have a birthday. It's after the holidays, everyone is exhausted and ready to commit to their resolutions of being healthier. I better make sure to give this birthday to two extra fun people to share." Amen. #BelowDeck #AfterDeck

“Yes, I’m an adult, and I’ve made a bubble bath before, but I don’t know what all these products that the stews have inside that the stews ask me to put together,” Arias hilariously shared as cameras captured her engulfed in pillows of fluffy soap.

But the bubbles got out of control

Chastain thinks Arias overloaded the tub with soap on purpose, but Arias insists she was just dumping liquids into the tub. “I don’t even know what I put in, but I was like, ‘That doesn’t look good.’ I put in another thing. It was coming out the door, which means I flooded the entire bathroom.”

Arias recalled hearing someone from production yelling for help because the foam was out of control. She heard the sound engineer saying that Arias was flooding the boat.  “And then I just remember Kate turning the corner, and she dropped to her knees, couldn’t even talk,” Arias added.

Chastain said bubbles were invading the master stateroom as Johnson finally arrived. “And then Amy was coming around and she was screaming so loud,” Arias said. Arias also shared that she did something to make her experience extra fun. “I had the charter guest’s extensions in my thong because she left them in a drawer, so a bubble bath with a woman’s extensions in my thong,” she revealed. “Proud.”

The damage could have been extensive, especially if the water overwhelmed the bathroom and master stateroom. Thankfully for these yachties, it was a mess they could clean up before the guests arrived the next day. “Once I realized the boat wasn’t gonna be supremely damaged, it was super fun,” Chastain remarked. “It was so wild. Best foam party in Below Deck history.”