The Duchess of Cambridge arrived soon after Meghan Markle to celebrate the Queen’s birthday at Trooping the Colour this afternoon, cutting an elegant figure as she paraded a formal yellow dress.

Kate donned the zesty pale coat dress with matching petalled fascinator by Philip Treacy as she was driven by chauffeur to Horse Guards Parade this morning.

She arrived with the Duke of Cambridge and reunited with the Duchess of Sussex – who made her first appearance since the birth of her son Archie last month. 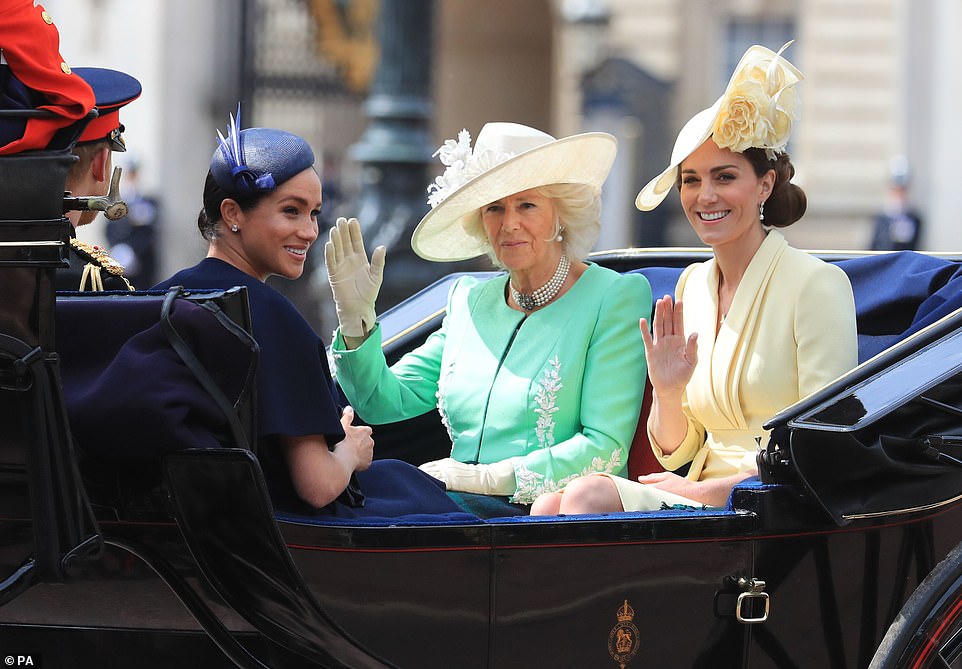 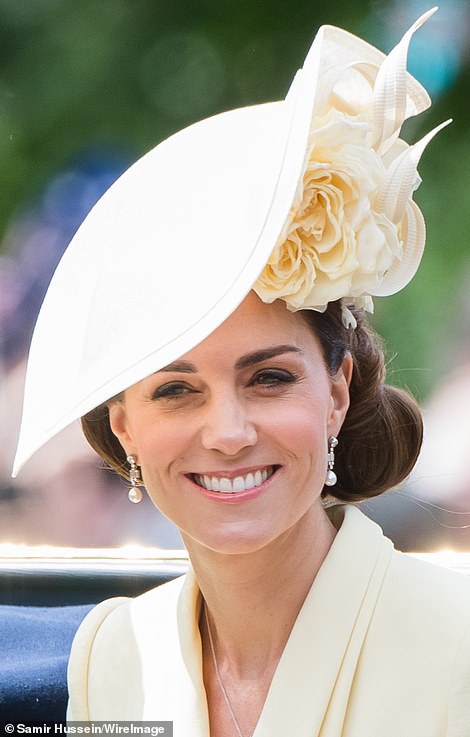 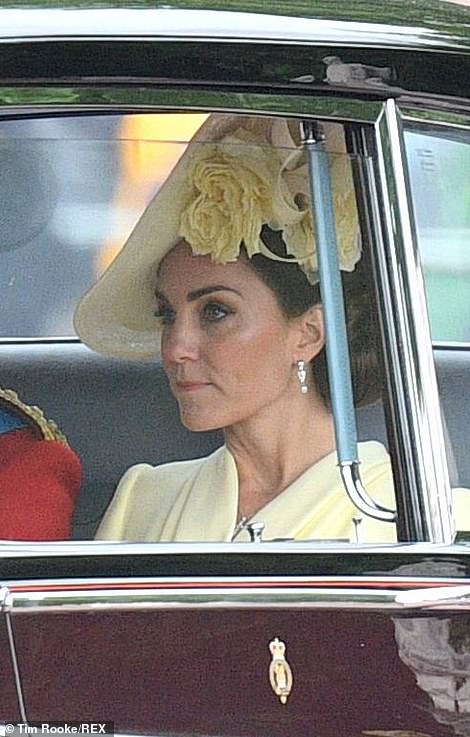 The Duchess of Cambridge, 37, looked tense (right) as she was pictured in the rear car seat, but also effortlessly radiant in a pair of Bahrein pearl drop earrings, which she has worn for the third time. But sitting next to the Duchess of Cornwall, Kate, at her eight Trooping, look relaxed as she smiled to the crowd (left)

The Duchess of Cambridge, 37, looked tense as she was pictured in the rear car seat, but also effortlessly radiant in a pair of Bahrein pearl drop earrings, which she has worn for the third time.

Kate is reportedly allergic to horses, so the hundreds surrounding her in Horse Guards Parade today may not be to her liking.

She was seen during Trooping the Colour in 2011 with her hand over her mouth on a Buckingham Palace balcony as if she was sneezing.

But sitting next to the Duchess of Cornwall, Kate, at her eight Trooping, look relaxed as she smiled to the crowd.

Prince Harry, Meghan, Kate and the other royals – including the Earl and Countess of Wessex and their children the Viscount Severn and Lady Louise Windsor – watched events from Wellington’s office overlooking Horse Guards. 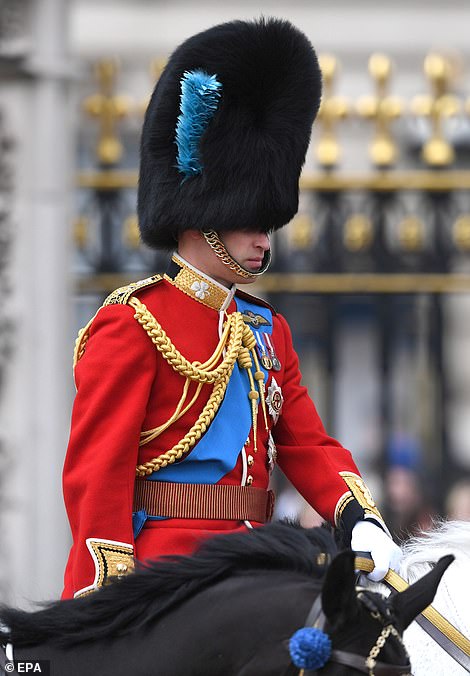 Among the guests was Theresa May who formally stepped down as Prime Minister on Friday, but will remain in office until an successor has been appointed.

After a week commemorating the sacrifices of Britain’s military 75 years ago on D-Day, the roles will be reversed and the Queen will be honoured by officers and soldiers from prestigious regiments at the event today.

The Trooping the Colour ceremony is the monarch’s official birthday parade and among the royals to attend today was Meghan, at her first official royal engagement since giving birth to son Archie just over four weeks ago.

The Duchess has been on maternity leave caring for her baby born at a private London hospital on May 6, and Harry has already spoken about how parenthood has changed their lives, saying he cannot imagine life without his son.

Meghan joined Harry, the Duchess of Cornwall and Duchess of Cambridge in a coach that was greeted by cheers from crowds in the Mall as it made its way to Horse Guards Parade in London’s Whitehall for the Trooping ceremony.

In another horse-drawn carriage was Princess Eugenie and husband Jack Brooksbank, Princess Beatrice and the Duke of Kent.

The Queen arrived in a procession full of pomp and pageantry featuring a Sovereign’s Escort from the Household Cavalry, made up of Life Guards and Blues and Royals, in their silver and gold breastplates and plumed helmets.

Trooping the Colour is social as well as a ceremonial occasion and in the stands overlooking the parade ground were the wives, girlfriends and parents of the guardsmen and officers on parade. 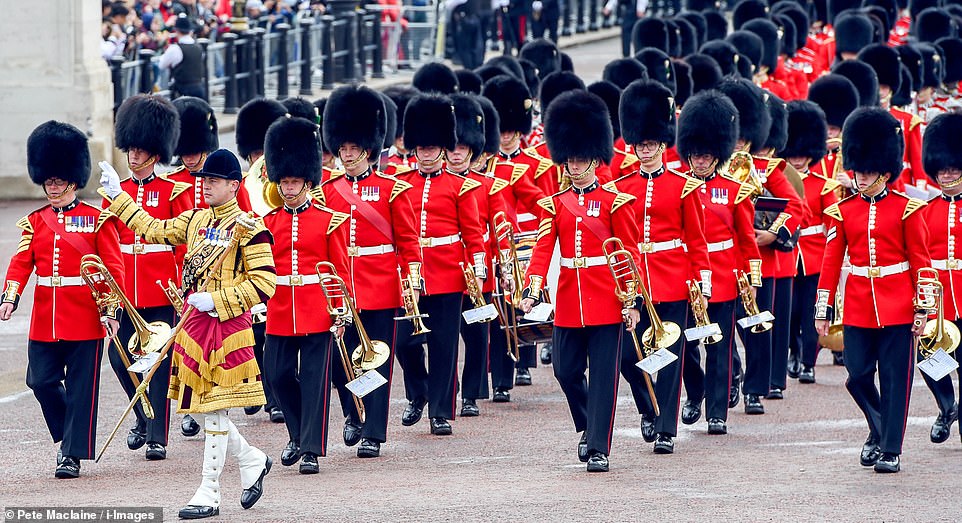 Despite the dreary weather, thousands of spectators have lined the streets to watch 1,400 troops, 400 musicians and 200 horses march in the parade 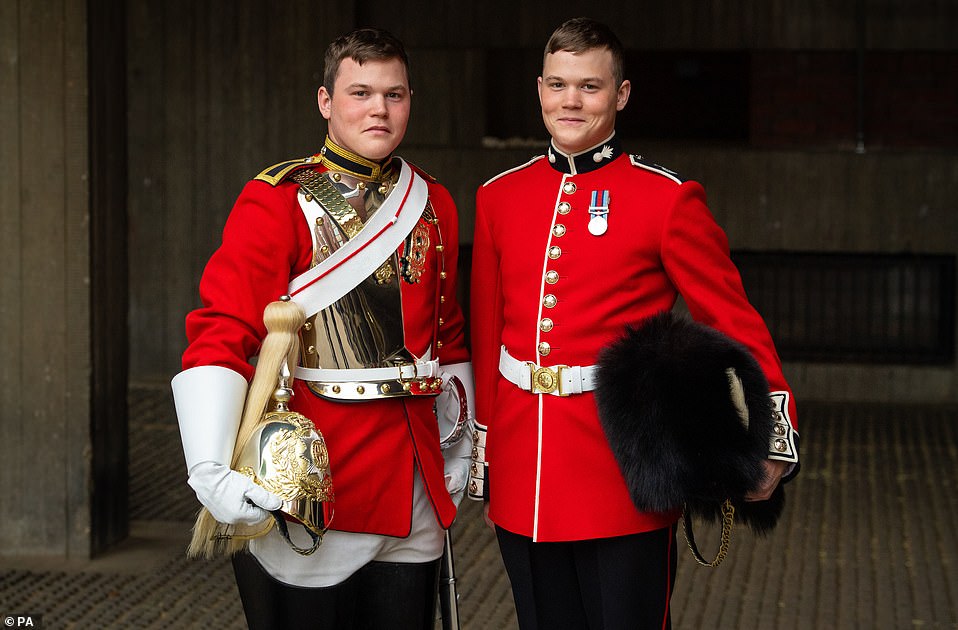 Among soldiers expected to attend are identical twins Ben and Thomas Dell, both 21, from Bath in Somerset. Thomas is in the Grenadier Guards while Ben will be with the Household Cavalry

The event featured around 1,400 servicemen in total and hundreds of Guardsmen were lined up on the parade ground waiting to be inspected by the Queen.

The colour, or ceremonial regimental flag, being paraded this year was from the 1st Battalion Grenadier Guards, a frontline infantry regiment of the British Army when not performing ceremonial duties.

Their lineage can be traced back to 1656 when the military unit was raised as the sovereign’s bodyguards by King Charles II while in exile in Bruges.