When Kathy Griffin did a 2017 photo shoot that featured her holding a graphic severed head that resembled Donald Trump, she had no idea her life was about to change. She lost jobs, had to cancel a tour and slowly, her life began spiraling. First, she turned to pills.

“I thought, ‘Well, I don’t even drink. Big deal, I take a couple pills now and again, who doesn’t?’” the comedian, 60, told Nightline in a new interview, airing on Monday, August 2. “Also, my age was a big part of it. I mean, who bottoms out and tries to take their life at 59? It’s almost a joke, right, and by the way, someday, this will all be comedy. Trust me … I was laughing to stay alive. And what I found is I felt like if I can’t make others laugh, then there’s no purpose for me to live. There’s no reason for me to live.”

The two-time Emmy winner also revealed during the interview that she was recently diagnosed with lung cancer, despite never having smoked, and is about to undergo surgery to have half of her lung removed. “The irony is not lost on me that, a little over a year ago, all I wanted to do was die,” she added. “And now, all I wanna do is live.” 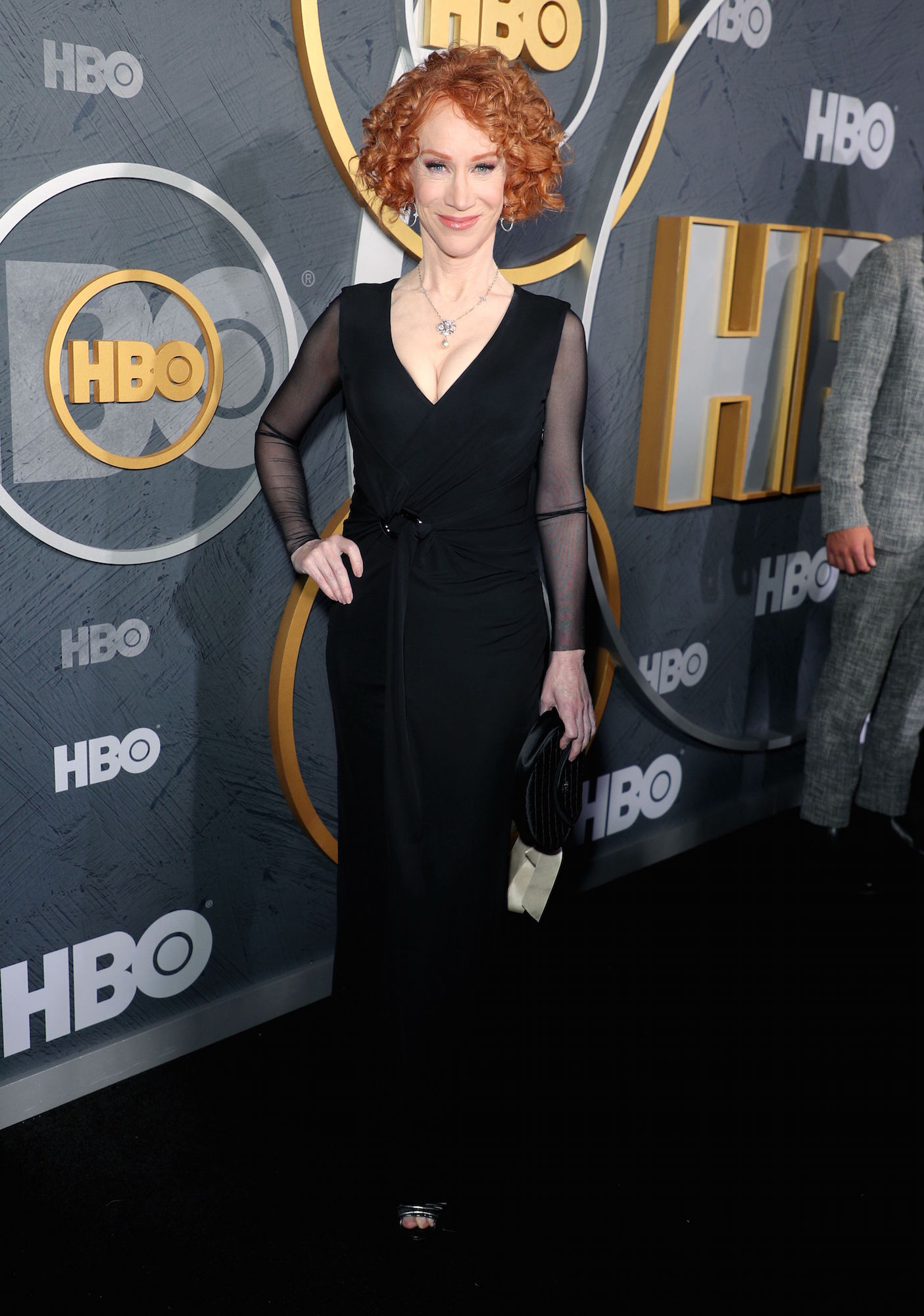 The Grammy winner’s pill addiction began when she was prescribed Provigil, an amphetamine similar to Adderall, and later, given Ambien to help her sleep. Down the line, she was also prescribed painkillers. During her “Laugh Your Head Off” tour, Griffin wasn’t able to keep down food down and wasn’t aware that she was quickly losing weight.

“I had such a drive to get back on stage and show that I couldn’t be taken down,” she explained at the time. “It was a really tough time. It was one of those times where I was on a mission and I was gonna get through it. And it was a very, very gratifying, but very difficult tour.”

Johnny Depp and More Stars Who Were Fired From Jobs

Following the controversial photo shoot, she was fired from CNN, and her close friend Anderson Cooper publicly slammed her, tweeting that he was “appalled by the photo shoot,” calling it “clearly disgusting and completely inappropriate.”

The situation with Cooper, 54, was extremely difficult for the Kathy Griffin: My Life on the D-List alum.

“I just loved him. I just adored him. So that one hurt,” she told Nightline. “I think that emotionally, that was the most painful, to have so many friends that, to this day, haven’t called.”

Then came the death threats — to her, her family and her husband’s family.

“I started thinking about suicide more and more as I got into the pill addiction, and it became almost an obsessive thought. I started really convincing myself it was a good decision,” the Official Book Club Selection: A Memoir According to Kathy Griffin author said. “I got my living revocable trust in order. I had all my ducks in a row. I wrote the note — the whole thing.”

Luckily, her husband, Randy Bick, helped her get help. She was placed on a psychiatric hold and upon her release, began working with doctors and went through a challenging detox. She explained, “I was so unsteady. Like, when I would brush my teeth, my husband had to hold my hips so I wouldn’t fall over.”

Now, the Suddenly Susan alum has been sober for just over a year. “I am so thrilled and grateful. I feel like, at 60, I’m gonna get a next chapter,” the actress added. “That’s the thing everyone said wasn’t gonna happen. I believed [it] wasn’t gonna happen.”

If you or someone you know is in emotional distress or considering suicide, call the National Suicide Prevention Lifeline at 1-800-273-TALK (8255).