All those years ago, as Treasurer dreaming of replacing Bob Hawke as prime minister, he came to the National Press Club in late 1990 and painted himself as the Placido Domingo of politics.

It was an irresistible self-portrait: the operatic tenor, singing his own praises, demanding the lead role. 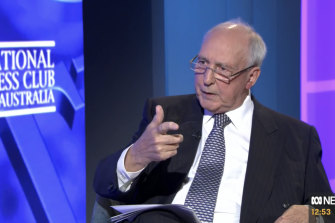 And here was Keating back at the press club on Wednesday, his canvas now the entire world, his word-picture landscape the globe as he sees it, complete with wicked illustrations of the places and events that do not meet his approval.

Australia, he declared, had lost its way by failing to understand – as he had done years ago – that its great gift was its geographical position as a part of the Asian region, and to be happy about it.

“But, no, we are not happy to be in the region. We are still trying to find our security from Asia rather than in Asia,” said Keating.

The new obsession, the Indo-Pacific region, was a sort of fiction, “this thing called the Indo-Pacific, like a big rectangular box”, with India on one side and Japan on the other, and neither with common purpose.

Australia no longer focused on the middle – Indonesia and the Association of South East Asian Nations.

As a result, Australia was “like a see-saw at the park – we are not on the pivot in the middle, but on the wobbly ends”.

“So here we have the Prime Minister going back to Cornwall, where James Cook had left 245 years earlier and where Arthur Phillip and the first fleet had left 233 years earlier. The ignominy of it speaks volumes.”

Cook actually left Plymouth, in Devon, and Phillip’s First Fleet departed Portsmouth, Hampshire, but when you’re deep in the big picture, trivial detail is no business of an artist like Keating.

Cornwall was Keating’s focus, for this was where the current Prime Minister, Scott Morrison, attended the June G7 meeting, which in Keating’s view, was nothing but “a backslapping operation”.

“All the good guys meet in common, the bad guys (like the leaders of China and Russia) left out,” he said. It was no surprise, thus, that the bad guys decided not to attend the recent Glasgow climate summit.

“So, you know, here we are, running to Cornwall, to find our security in Asia. I mean, really.”

And of the host of the said backslapping operation, Boris Johnson: “Waxing lyrical down there in Cornwall – Britain is like an old theme park sliding into the Atlantic compared to modern China”.

The binding theme of Keating’s performance was China’s place in the world, and the failure of Western strategists and leaders to understand it and to reach an accommodation with it.

The China he drew was not the aggressive power seeking military domination of the oceans painted by Australian and US leaders, but a giant seeking respect for having dragged its people out of poverty to the point that its real economy was now 20 per cent larger than that of the US, and soon enough would be twice and more.

China’s chief interest, he declared, was in linking itself via the “Stan” nations to Europe, and in keeping the US from its shores.

Meanwhile, Australia had chosen to buy American nuclear attack submarines to hunt and kill Chinese submarines, rather than to defend Australia.

“Eight submarines against China in 20 years’ time,” he mocked.

“A handful of toothpicks at the mountain.”