Labor has set up a clash with the Greens on climate change in a bid to assure voters it will not change its 43 per cent target to cut greenhouse gas emissions if it wins the election, insisting the Parliament would have to pass the goal or vote it down.

Anxious to quash a scare campaign about a higher target, Labor climate spokesman Chris Bowen ruled out a negotiation with the Greens on the figure in the event of a hung Parliament despite Coalition claims he would have to overhaul his policy. 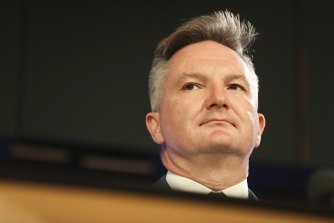 Chris Bowen says there will be no deals with the Greens on climate change.Credit:Alex Ellinghausen

Mr Bowen also rebuffed calls from the Greens to close coal-fired power stations and phase out coal exports by arguing nothing in the Labor policy would bring forward closures or hurt exporters who were exposed to competition from overseas.

The Labor pledge is to introduce a bill to Parliament that specifies the 43 per cent cut in emissions by 2030 on the levels of 2005 and to refuse to accept changes by the Greens, with the lower house rejecting amendments to the target in the Senate.

The Labor stance seeks to avoid repeating the party’s deal with the Greens in 2010, when the Gillard government legislated a price on carbon after ruling out a carbon tax before the election, and challenges the Greens to avoid a repeat of a pivotal vote in 2009 when the minor party vetoed an emissions trading scheme because it wanted a more ambitious policy.

Asked if Labor would negotiate on the target to secure support from the Greens, Mr Bowen said: “No.”

Labor is promising to make its target a formal commitment to the United Nations if it wins power, saying it is willing to legislate the goal while the Coalition could not do the same because conservatives would block a bill that cemented increasing the government’s 26 to 28 per cent target to its forecast 35 per cent emissions reduction by 2030.

But with Greens leader Adam Bandt calling for a 75 per cent cut in emissions by that year, Prime Minister Scott Morrison claimed a Labor government would have to give in to the Greens on climate.

“For Labor to legislate if they were to form government they would have to do that with the support of the Greens,” he said, while campaigning in the seat of Wentworth in eastern Sydney.

“So 43 per cent is just the opening bid for Labor. And you know what the Greens’ target is, it’s 75 per cent. So vote Labor, you vote Greens and you vote for the Greens targets.”

Mr Morrison was reminded of the disagreements within his backbench, however, when a journalist asked if he backed a call from Dave Sharma, the Liberal member for Wentworth, to cut emissions by 40 to 45 per cent by 2035.

“That’s not the government’s policy. I respect Dave’s commitment to this area,” Mr Morrison said.

In the first lengthy explanation of the Labor plan since it was unveiled last Friday, Mr Bowen said the modelling for the policy assumed the government could only achieve a 30 per cent reduction by 2030 and the additional Labor measures would take the figure to 43 per cent and no further.

Mr Bowen rejected speculation the Labor target would rise to 48 per cent in the event the government was able to reach the upper range of its stated 30 to 35 per cent forecast.

While Greenpeace and the Greens have dismissed the goal as too low, Australian National University professor Mark Howden said the number was in line with the agreement at the United Nations climate summit in Glasgow last month to cut emissions by 45 per cent by 2030 on the levels of 2010.

“So the amount of reduction in emissions in absolute terms that these two policies/goals require is almost identical, and so it is fair to say that the Labor Party emission reduction policy is in accord with the Glasgow Pact of 45 per cent reductions against 2010 emissions by 2030,” he said.

The modelling for the Labor policy, conducted by economics firm RepuTex, says the policy would create 64,000 direct and 540,000 indirect jobs by 2030 and triggered a claim from former ACTU president Jennie George in The Australian that the figure was “so high as to make it unbelievable” because the multiplier effect was too great.

Mr Bowen rejected that complaint and said the modelling applied a multiplier in each sector of the economy rather than across the board.

“But that modelling stands up to scrutiny from anyone.”

Asked how many jobs would be lost, Mr Bowen said the modelling showed a total gain.

Energy Minister Angus Taylor said the difference in the two goals, from the government’s 35 per cent forecast to Labor’s 43 per cent target, required “very significant” policies including a carbon tax on industry. Labor has ruled out a carbon tax.