A political storm over the treatment of women has forced Prime Minister Scott Morrison to sideline Education Minister Alan Tudge in the final day of Parliament for the year, as the government struggled to gain ground on key bills ahead of the next election.

Mr Morrison ordered an inquiry into Mr Tudge and asked him to stand aside after the minister’s former press secretary, Rachelle Miller, went public with new claims that he was abusive when they had an affair that led her to leave his office. 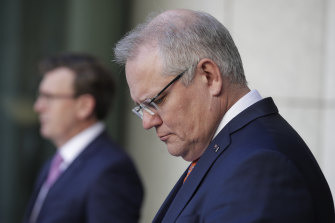 Scott Morrison was forced to sideline Alan Tudge in a turbulent last fortnight of Parliament.Credit:Alex Ellinghausen

While Mr Tudge said he “completely and utterly” rejected the claims, the dispute heightened the political danger to the government over the treatment of women after Sex Discrimination Commissioner Kate Jenkins called on Tuesday for an overhaul of the culture in Parliament.

An election in March remains an option for the government after it ended Parliament for the year with Health Minister Greg Hunt announcing he would leave politics, one day after former cabinet minister Christian Porter said he would quit.

Mr Morrison has asked Employment Minister and close friend Stuart Robert to take on Mr Tudge’s duties while the inquiry proceeds, but there is no deadline for the review and the government may need to name new ministers before it seeks a fourth term in power.

While Parliament is scheduled to return on February 8 for several weeks of sittings before a March 29 federal budget and an election in early May, the Prime Minister has the option of going to the polls in March.

Labor leader Anthony Albanese will prepare for the election by unveiling a climate policy on Friday that sets a new target between 35 and 45 per cent to reduce greenhouse gas emissions by 2030, defining the policy differences with the Coalition and the Greens.

Mr Albanese will convene a shadow cabinet meeting and caucus discussion on Friday morning to sign off on the new policy, which will include new measures to claim Labor has a more detailed plan than the Coalition.

The policy will abandon a previous election pledge on fuel standards out of concern over a possible Coalition scare campaign on petrol prices.

With both sides preparing new attack lines for the campaign, Labor used question time to blame the government for higher costs for working families with a claim household petrol costs had risen by up to $900 in a year while real wages had fallen by $700.

Mr Morrison hit back with a list of products and services where prices had fallen over the past three years or risen at lower rates than they did in a similar period when Labor was in power, claiming this included electricity, fuel, clothing, communications and housing.

“Our strong economic management will always ensure Australians will be better off than they would be under the Labor Party, and they’ll be able to keep more of what they earn,” Mr Morrison said.

The claim signalled an election pitch based on tax cuts but Mr Albanese pointed to a series of upsets in Parliament over the past fortnight, including Liberals and Nationals crossing the floor against the government, to claim Mr Morrison had lost the ability to govern.

With another rebellion in sight, the government dropped plans to bring its religious freedom proposal to a vote in the House of Representatives on Thursday because Liberal MPs including Bridget Archer, Warren Entsch and Trent Zimmerman wanted more time.

The delay means the Religious Discrimination Act is unlikely to pass before the election, with Liberals at odds over the impact on gay and lesbian Australians and Labor holding out until it sees the results of an inquiry due to report on February 4, leaving few sitting weeks to decide on the bill even if the election is in May.

Seeking to win over more Liberals to the plan, the Prime Minister added a provision to remove Section 38 (3) of the Sex Discrimination Act, scrapping an exemption that allows religious schools to suspend or expel LGBTQI students.

The offer was a win for four Liberals who pushed for the changes – Katie Allen, Angie Bell, Fiona Martin and Dave Sharma – and will be kept as part of the package when debate resumes next year.

A separate exemption will remain, however, so religious schools can hire or fire teachers and other workers on the basis of their sex, sexual orientation, gender identity, marital or relationship status.

Christian Schools Australia rejected the plan to change the rules on students in order to pass the Religious Discrimination Act, saying the “shady back room deals” should not wipe out the ability to teach in accordance with a religious faith.

The association said there were “reasonable expectations on student behaviour” and the government should continue with its earlier plan for a review into exemptions over the next year.

Equality Australia said the exemptions around LGBTQI students should be scrapped as soon as possible but the Religious Discrimination Act should to be opposed or delayed.

“If MPs care about preserving protections for marginalised communities, they must oppose this Religious Discrimination Bill or at least send it to an inquiry to consider before debating it,” Equality Australia chief Anna Brown said.

The government did not introduce its bill to set up a Commonwealth Integrity Commission and dropped its bill to require identification from voters at elections, in a deal with Labor that passed new rules for political campaigners including some charities to disclose their spending.

The government claimed progress on the Crimes Amendment (Remissions of Sentences) Bill, which was passed by the Senate and will prevent authorities reducing the sentences of terrorist offenders and anyone else subject to a sentence under federal law.