EXCLUSIVE: You’ll be familiar with All3Media as a global production empire, spanning 40 companies and international hits including Fleabag and Undercover Boss. What you might not be so familiar with is the empire within the empire. Meet Objective Media Group (or OMG as it is affectionately known internally), which in the space of five years has gone from one company, famed for series like Peep Show, to a mini-group with 10 production units under its wing and a slate of notable transatlantic series. Highlights from the past 12 months alone include getting entertainment format The Cube away in the UK and the U.S. almost simultaneously, sprouting Netflix scripted hit Feel Good, helping Gordon Ramsay become a re-energized TV force, and successfully launching and clinching a second season renewal for HBO Max reality series 12 Dates Of Christmas. 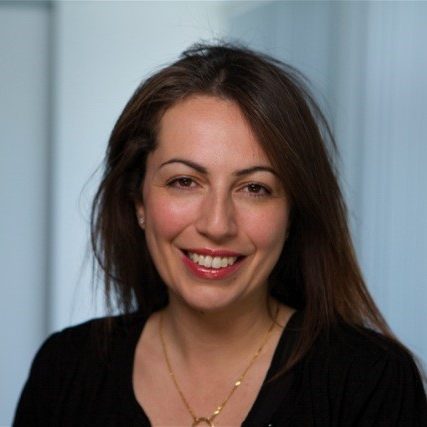 OMG’s Russian doll strategy is the brainchild of Layla Smith, a former ITV commissioner and Hell’s Kitchen producer, who joined the company as CEO in August 2015. She knew early on that she did not want to attract talent through traditional recruitment and instead had ambitions to build a group within a group. Her vision was quickly endorsed by All3Media CEO Jane Turton, and the idea was to create a “halfway house” for producers: Somewhere between becoming a head of a department, and spearheading a singular production company in the glare of the wider All3Media group, where there are limited opportunities for startups. Smith says OMG provides “a lot of help” for inexperienced company leaders, from laying on the nasty back-office chores that many creatives loath, to providing oven-ready team camaraderie.

The structure is a product of Smith’s own experience after she stepped out of a 15-year executive role at ITV in 2013 and, with no record of running a company, plunged herself into leading John Stanley Productions alongside The Great British Bake Off host Matt Lucas. “If you don’t have support surrounding you, that can feel really shocking at first… I came out of ITV network, where I was quite used to business and commercial conversations, but it’s different from running your own business. You think: ‘Good God, I’m going to have to get my head around this. It’s going to take quite a bit of time, and in that time, I could be devising a show and selling it.’”

Since setting out her stall, OMG has proved an attractive partner for talent including Emmy-winning producer Jimmy Fox, who set up Punky Brewster producer Main Event Media in 2017; Ramsay’s follow-up to One Potato Two Potato, Studio Ramsay; and Ben Shephard, a British television presenter best-know for hosting shows including Good Morning Britain and the UK version of Ninja Warrior. Scripted has been a major focus, with Objective Fiction building a comedy and drama slate and branching out via a deal with Guilt writer Neil Forsyth, while factual-drama specialist Story Films joined the OMG fold in 2017. And the federal structure seems to be working: OMG’s latest earnings show revenue grew by a third to £13.2 million ($18M) in 2019, while it also reduced its losses. 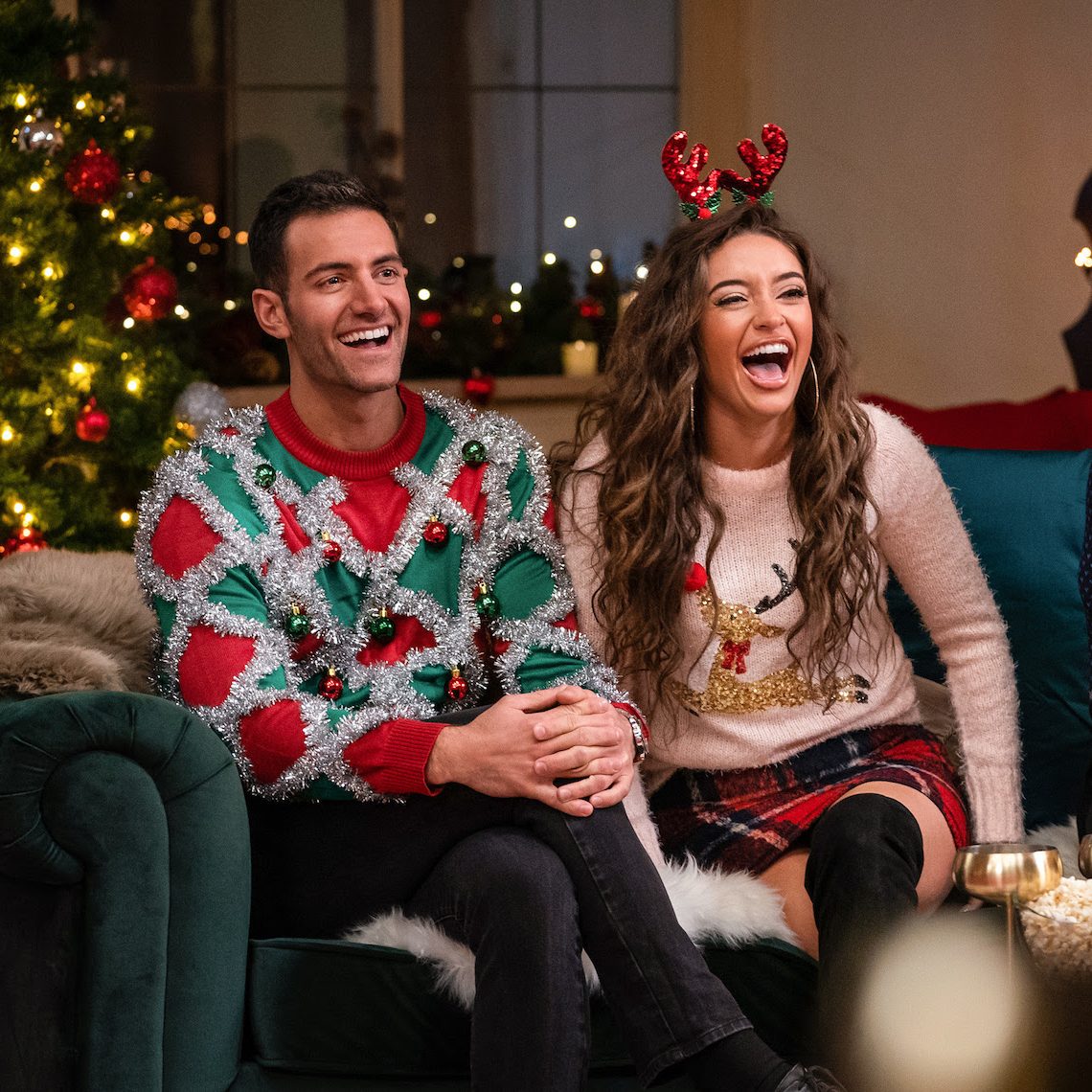 Smith says her cluster of companies got “lucky” with the timing of the coronavirus pandemic. As the disease wiped out production around the world last March, many of OMG’s biggest shows were on the verge of wrapping or were in post-production. For example, HBO Max’s 12 Dates Of Christmas had completed its big Austria shoot, leaving only home filming left to complete. By the time HBO Max ordered a reunion show, in which the singletons came together after their holiday romance adventure, OMG had its safety protocols in place. It meant the participants went through up to three coronavirus tests before the studio shoot. There was one positive, which “ricocheted” through a bubble, meaning some contestants joined the show via Zoom. It was manageable, but not ideal, acknowledges Smith. “You spend the best part of three days, when you should be in rehearsals worrying about content, [instead] worrying about who’s on Zoom and talking to Covid officers about keeping people safe. You multiply the things you have to worry about at the same time as staying creative,” she sighs, reflecting on a reality facing all producers.

Over in scripted, the second season of Feel Good and Story Films’ new Channel 4 true-crime series, My Name Is Lizzie, wrapped last year once protocols were in place and before a nasty Covid-19 resurgence in the UK. Meanwhile, OMG’s next big drama series The Larkins, a reboot of ITV’s iconic 1990s series The Darling Buds Of May (the show that gave Catherine Zeta-Jones her big break), was in preparation before the pandemic hit, so was able to down tools without halting filming. The plan is to remount in the spring, but OMG is tightening safety rules and production bubbles on the 12-week shoot as new strains of Covid run wild in the UK. OMG is co-producing The Larkins alongside Genial Productions, with Bradley Walsh and Joanna Scanlan set as the leads in a story about a golden-hearted 1950s working-class family with six children.

“I wouldn’t say we’ve overcome the worst [of coronavirus],” Smith says. “What’s easier now is that we know how to pull off production with Covid protocols. What happens with the new strains is we’ll just have to keep tweaking something and making something more robust, which is easier than starting from scratch.” 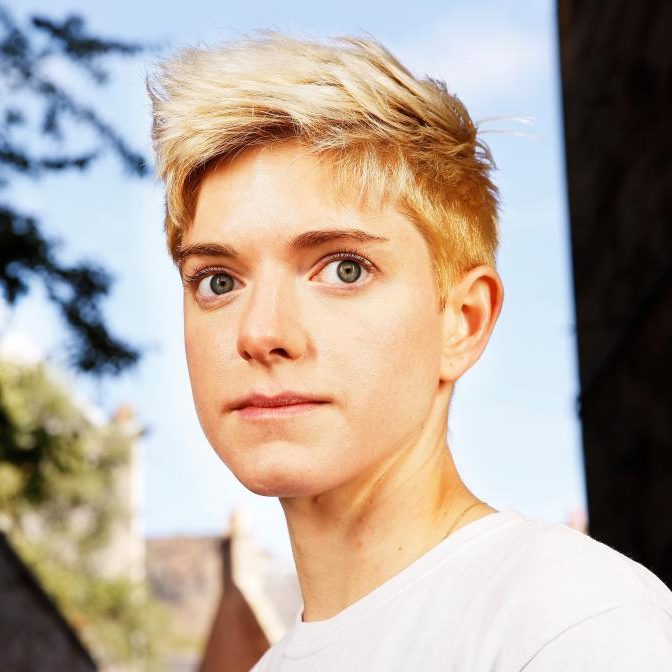 Smith adds that Feel Good has become a “real calling card” for the progress of Objective Fiction under the leadership of Ben Farrell​. Mae Martin’s story about the whirlwind romance of a stand-up comedian recovering from drug addiction won Best Comedy at the Edinburgh TV Awards last year and was renewed by Netflix for a second and final season. As part of its commitment to Season 2, Netflix announced that it is working on another project with Martin, which Smith reveals is titled Programmed and will be closer to a drama than a comedy. She adds that the “character development and proper storytelling” in Martin’s work shows the “line that Objective Fiction is treading,” having previously been famed for comedies like Peep Show and Toast Of London. And there’s more to come, with Smith hinting at other drama script commissions.

Lisa Kudrow-starrer Feel Good was originally a co-production with Channel 4, but the British broadcaster had to back out of Season 2 due to Covid-related content cuts. It’s not the only Objective Fiction show that has suffered as a result of Channel 4’s axe-wielding, with Smith telling Deadline that the broadcaster has also reversed its decision to commission a second season of Victorian-era comedy crime caper Year Of The Rabbit. Objective Fiction is now looking for another partner alongside U.S. cable network IFC, which co-produced Season 1. “Year Of The Rabbit is a victim of the devastating effects of Covid,” Smith explains. “IFC are very committed to the show, but we will need to find another partner — and we’re working on that.”

In better news, Smith confirms that Year Of The Rabbit star Matt Berry is working on a new series of his BAFTA-winning comedy Toast Of London. Arthur Mathews, who co-writes the series with Berry, has suggested that the fourth season could follow eccentric actor Toast as he works in the U.S. “The best thing I can imagine is Toast in his black suit, completely unchanged, in the midst of America,” laughs Smith. And talking of comedy travails in the U.S., Objective Fiction is still very much in development with FX on an adaptation of Peep Show. The iconic Channel 4 series, following the POV lives of dysfunctional friends Mark and Jeremy, will be gender-flipped for FX, with two women taking center stage. Smith says she’s hoping for news on a pilot soon, and original creators Sam Bain and Jesse Armstrong (the mastermind behind a little show called Succession) are across the scripts. “It’s got their seal of approval,” she adds. 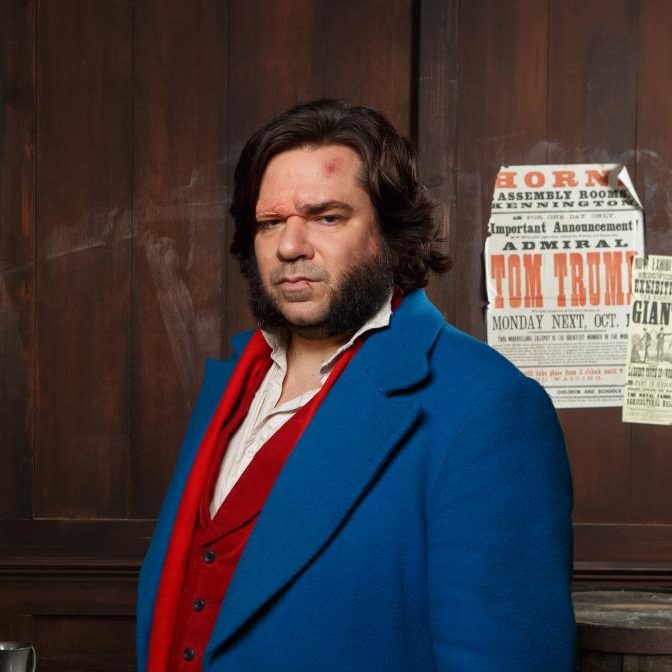 Peep Show is not the only brand that OMG has been focused on adapting in America. The company has been attempting to get sports game show The Cube away for some time, but finally cracked the code last year, getting a version of the show picked up by WarnerMedia. Presented by NBA star Dwyane Wade, the format pairs up contestants in a series of mental and physical challenges inside a small Perspex cube. Smith calls Wade and the format a “match made in heaven,” adding that the sports star “loves chatting to people,” which is half the battle when hosting entertainment shows. Production took place in Atlanta during lockdown last year and the show will have more of a “stadium” feel compared to the UK version, which itself was revived and retooled by ITV in 2020 after a five-year hiatus. Asked if ITV will renew, Smith responds: “I would very much hope so.”

The Million Pound Cube, as it is known in the UK, is housed at the label formerly known as Wildcard, run by Shephard and Ed de Burgh. But after OMG hired Fox executive producer Becca Walker (Celebrity Watch Party) last year, the label is rebranding with an eye on becoming a “bigger, stronger force.” Its slate includes ITV daytime game show, Lingo, hosted by Citizen Khan creator Adil Ray, which was made in Manchester alongside another OMG label, Purple. The yet-to-be-named entertainment hub also feeds into work in the U.S., where OMG America is run by former Pulse Films and Channel 4 executive Jilly Pearce. OMG America is responsible for shows including The Cube, 12 Dates and ongoing cable brands like Worst Cooks In America. Smith says OMG is not looking to expand its portfolio of entertainment labels in the UK or U.S. right now, but is in the market to hire people, like it did last year with Saterah Moore, who was brought in as head of current programming in America after she was on an overall deal with MTV. This shows the flexibility of the model Smith is trying to create — it’s not one size fits all for the creators it brings on board. It’s also about doubling down on “pillars of strengths,” she adds. 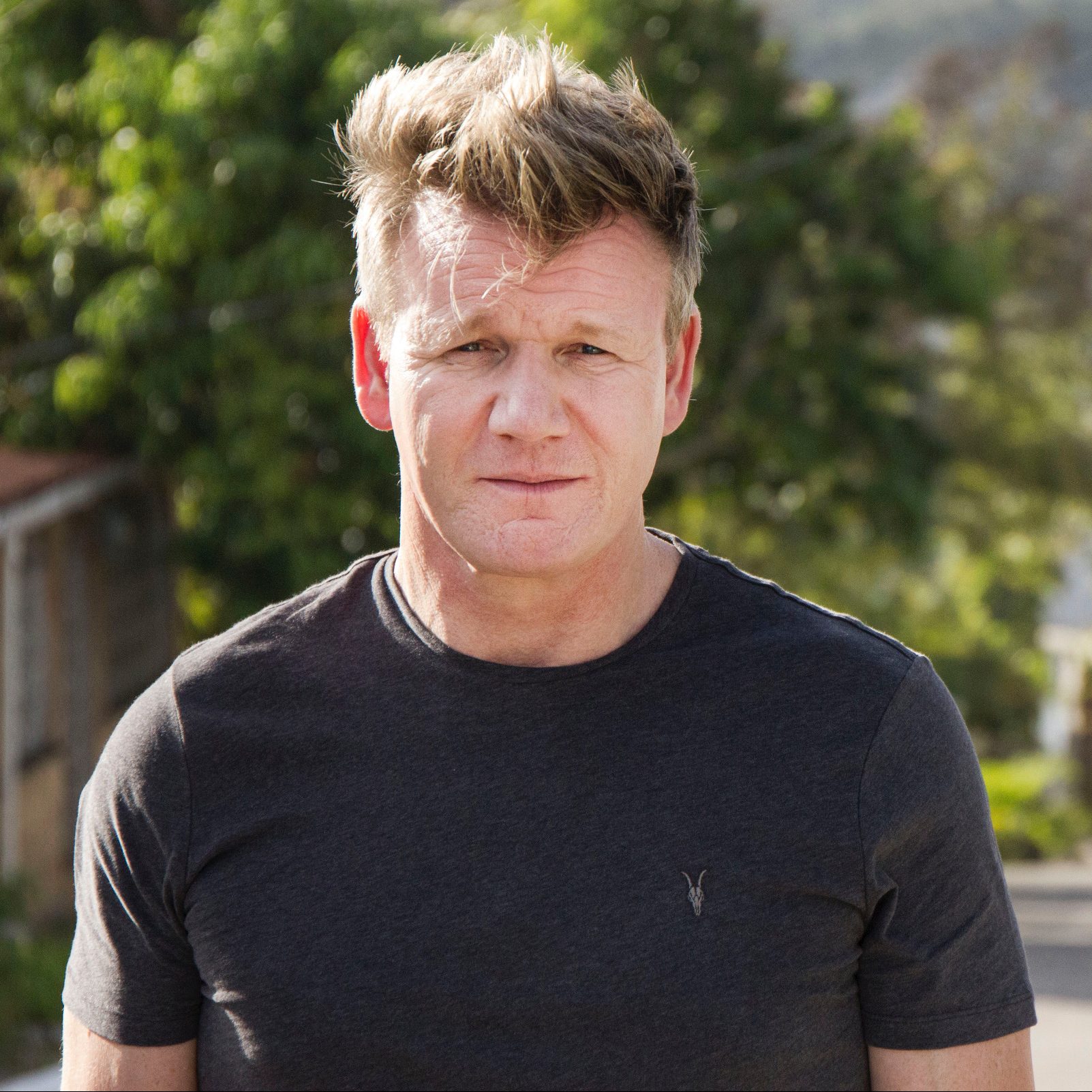 Elsewhere, one company that has been under OMG’s wing is flying the nest. Ramsay’s Studio Ramsay launched with Smith’s support in 2016, but the venture is now functioning independently with the famous chef and former Lion TV producer Lisa Edwards at the helm. Smith explains: “The plan has always been, we launched him and we support him and the company. And then over the years, they become a fully-fledged company and go off in their right. We are absolutely at that interchange now… they’re flying.” Studio Ramsay has gone from standing start to £40M in revenue and more than 60 hours of TV in production last year. As well as U.S. shows, such as Nat Geo’s Gordon Ramsay: Uncharted, Ramsay has refocused on the UK market, spawning an ITV franchise in the shape of travel series Gordon, Gino and Fred. The pandemic halted progress on its BBC One competition format, Future Food Stars, but it should go into production this year, while game show Bank Balance (again for BBC One) will be its first solo production.

Studio Ramsay’s success is, in many ways, a testament to the model Smith has built. Her vision is not unique, but she has drawn on her own experience to empower others, and in doing so, created a fleet of multi-genre shows on both sides of the Atlantic.