Embattled Liberal candidate for Warringah Katherine Deves invoked the stolen generations in tweets expressing concern that courts could “remove children from loving homes” if their parents did not approve of them changing sex.

She also speculated Canadian actor Elliot Page was “paid” to come out as transgender and said the actor’s transition was a publicity stunt. 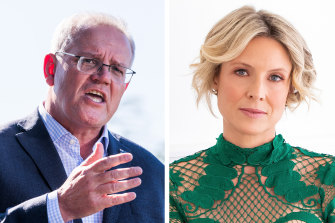 In now-deleted tweets from September, Deves linked to a West Australian court decision in which a judge dismissed an appeal from the parents of a trans child who was taken into the state’s care.

“Australia has a very dark history of children being taken from their families by the state [because] bureaucrats thought they knew better. Don’t we owe it to lessons of the past, such as our shameful Stolen Generation scandal, to stop the destruction of families for flawed beliefs?” Deves tweeted. 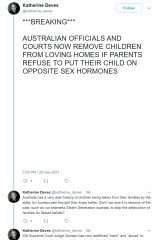 “This has been based on the erroneous and debunked narrative that children will suicide if they are denied puberty blockers, hormones and surgery, even though evidence demonstrates self-harm and suicide ideation increase after transition.”

Separately, in a December 2020 video, Deves criticised Prime Minister Scott Morrison’s government by wrongly claiming there were fewer women in his cabinet than in the 1970s. In a discussion with feminist activist Kellie-jay Keen, Deves said: “I think we have less women in the cabinet than what we did in the ’70s. So we’re going backwards.”

In fact, Morrison at the time had six women in his cabinet, equalling the record previously held by former prime minister Kevin Rudd, and later increased that to seven. In the 1970s, Malcolm Fraser had one woman in his cabinet, Margaret Guilfoyle.

Asked in the same discussion about Australia’s first female prime minister, Labor’s Julia Gillard, Deves lamented: “They hounded her away … they’re dreadful to the women politicians here in Australia, they’re so awful.”

In the same video, Deves also speculated that Page, who had just come out as transgender at the time, was “paid” to do so. “Of course it was [a stunt],” she claimed. “Her star had waned quite some time ago and now suddenly she’s back in the limelight.

“This is just my personal speculation. I’m very cynical, but I think: ‘Was she paid to do that?’ There’s so much money behind this, sometimes I wonder when people do and say things, you think, ‘That’s extraordinary, where did that come from?’ 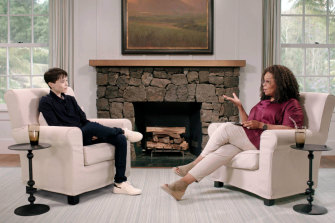 Elliot Page was interviewed by Oprah Winfrey for an episode of The Oprah Conversation.Credit:Apple TV+

Deves has been under fire for a week over her commentary about transgender issues, such as calling trans children “surgically mutilated”, saying she was “triggered” by the rainbow flag and likening her fight against gender ideology to the Nazi resistance.

She has apologised multiple times for her “language” and for any hurt caused, but not for her views, saying she stands by her fight for the safety of women and girls in sport. Morrison has also backed Deves, describing the outrage as a “pile-on”.

“This is a woman standing up for women and girls in sport. That’s her primary issue that she has raised,” Morrison said on Saturday. “There are ways that she has expressed this in the past that she no longer feels comfortable with.”

Deves was selected as the Liberal candidate for Warringah by Morrison himself, along with NSW Premier Dominic Perrottet and former party president Chris McDiven, amid an internal stoush in NSW over candidate preselections.

NSW Treasurer and moderate faction leader Matt Kean has called for Deves to be dumped as the Warringah candidate.

Warringah MP Zali Steggall said she had no doubt Morrison was “using this candidate to deviate from actual issues”.

“He is seeking to divide and vilify our trans children,” she told ABC’s RN Breakfast on Monday. “This is a politicised weaponisation of a side issue.”